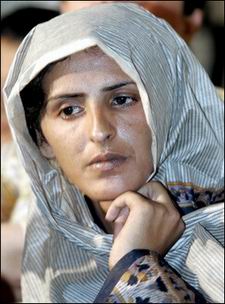 On the 22nd of June, 2002, Mukhtaran Mai, aPakistani seamstress from a small village in the Punjab province was gang raped by allegedly 4 men from a neighbouring clan. It was ordered by the village counsel, as a form of honour revenge, as her 12 year old brother was falsely accused of offending the honour of a powerful clan by having illicit sex with one of their women.

Immediately following the rape, she was forced to parade naked through the village. According to tradition, she was expected to then commit suicide but instead has spent the last 9 years fighting for justice. Initially, her case showed a great deal of promise. Fourteen men were originally arrested and charged for their involvement in the rape of Mai (four were charged with rape, and the rest with abetment).

Since this time however,charges have gradually been lifted or reduced. Eight of the fourteen men were acquitted, and six were sentenced to death in August of 2002. In March 2005,this judgement was reversed by the Lahore high court, and five of the six were acquitted, while the sixth was sentenced to life imprisonment. In June 2005,Mai’s name was added to an Exit Control List which prevented her from travelling abroad – a measure many believe was taken to prevent Mai’s case fromgenerating negative global publicity for Pakistan. Though her name was eventually lifted from the ECL, her passport remained confiscated by authorities.

However, despite someimprovements, Mai’s situation has unfortunately taken another turn forthe worse. On Thursday, April 21st, 2011, the Pakistan Supreme Court upheld theverdict of the Lahore high court and ordered the release of the five acquittedmen. Mai and her family now fear for their lives and safety.

It’s time we show the government of Pakistan that efforts to conceal ongoing violence against womenin Pakistan have failed. Mukhtaran Mai’s story is just one of thousands demonstrating the injustice that women, religious minorities, and those who are among the lower classes face on a daily basis, and the corrupt legal system which continues to allow for shocking inequality to occur. The world will not remain passive onlookers to this violation of human rights.

By signing your name to this onlinepetition, you are supporting Mai’s case, and demanding that the PakistanSupreme Court overturn the Lahore high court, and uphold the ORIGINAL verdict for the other fivemen who were found guilty of raping Mukhtaran Mai.

In doing so, you send aclear signal to the Pakistani government to end its blatant gender apartheid laws that stigmatize brave women like Mukhtaran Mai from coming forward tobring justice on their abusers.