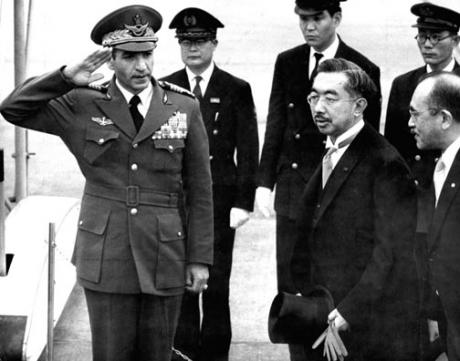 Tokyo, May, 1958: Shah Mohammad Reza Pahlavi of Iran salutes the honor guard of the Japan Ground Self Defense Force after his arrival at the Tokyo airport, where he was greeted by Emperor Hirohito, foreground. Often compared in it’s development to the “Japan of the Middle East”, Imperial Iran tried to emulate Japan’s economic growth in a number of areas not without it’s share of difficulties, obstacles and often confronted to similar social problems linked to rapid Urbanization, massive rural flight into towns in search of better opportunities, cultural clash between modernity and tradition all of which were also to similarly influence filmmakers and documentaries in both countries. Not Surprising that Abbas Kiarostami was to be largely influenced by Akira Kurosawa …

Let’s Face It: The Cold War and the Atomic Age:


The Atomic Age, also known as the Atomic Era, is a phrase typically used to delineate the period of history following the detonation of the first nuclear bomb Trinity on July 16, 1945. Although nuclear science existed before this event, the following bombing of Hiroshima, Japan represented the first large-scale, practical use of nuclear technology and ushered in profound changes in socio-political thinking and the course of technology development.

Japan’s Emperor’s Birthday (Photos and video Footage):
On the 29th April emperor Hirohito (now Showa)’s birthday Imperial Palace gardens in Tokyo were opened to the public to congratulate their majesty. With him were empress Kõjun and crown prince Akihito and princess Michiko.
Camera: Michael Rogge


Japan 1950’s:
Rare old movie film of post-war Japan in the 1950’s, where an American brought his family after the peace treaty was signed. Wherever they went, the Loken kids attracted lots of attention with their light hair and skin.

Japan rises to affluence, Osaka stockmarket 1960:
In 1960 Japanese economy headed for a boom. House wives too profited and could live in modern flats with appliances. Savings were invested at the stock exchange. Seen is the Osaka bourse. Camera: Michael Rogge


Outcasts in Japan 1960:
Outcasts: eta had no part in the rising affluence. They lived along the streets or in hamlets: buraku. After the war the Buraku Liberation League was formed. Eta were also found amongst bookmakers of bicycle races. Camera: Michael Rogge.

Student misery in old Japan 1960:
In 1960 students in Osaka lived in dormitories for their examinations. In Tokyo students worked till late at night for their entrance examinations upon which their whole future life depended. Resulting in rebellion and political engagement. Amongst them the world’s highest suicide stats. Camera: Michael Rogge


Trailer to The Sun’s Burial (1960):
In Osaka’s slum, youth without future engage in pilfering, assault and robbery, prostitution, and the buying and selling of identity cards and of blood. Alliances constantly shift.

Trailer to The Pornographers (1966):
Subu makes pornographic films. He sees nothing wrong with it. They are an aid to a repressed society, and he uses the money to support his landlady, Haru, and her family. From time to time, Haru shares her bed with Subu, though she believes her dead husband, reincarnated as a carp, disapproves. Director Shohei Imamura has always delighted in the kinky exploits of lowlifes, and in this 1966 classic, he finds subversive humor in the bizarre dynamics of Haru, her Oedipal son, and her daughter, the true object of her pornographer-boyfriend’s obsession. Imamura’s comic treatment of such taboos as voyeurism and incest sparked controversy when the film was released, but The Pornographers has outlasted its critics, and now seems frankly ahead of its time.

Film commissioned by Women Organization’s on Prostitution in Nowshahr, Iran:

Film was not released before the revolution, where it’s director finally managed to edit it in it’s final version before being confiscated again once revolutionary fervor came to an end.

Promotional Film commissioned by Iran’s Minister of State for Women’s Affairs to showcase the various organizations dedicated to defending Iranian Women’s status and demands in society during the Pahlavi Dynasty.