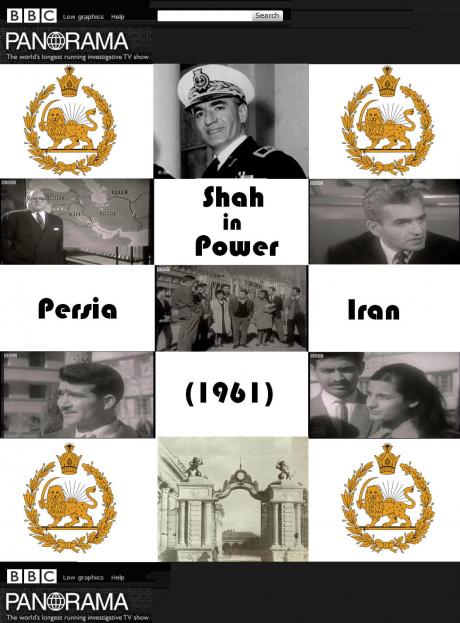 BBC’s Panorama visits Iran in 1961 in this revealing documentary on the level of social freedoms and progress enjoyed by Iranians at the time. University Students are asked about the Freedom of the Press and Politics. Also the Shah is asked if he allowed the formation of political parties ( Non Communist). This was a decade before the creation in 1970’s of the unified Rastakhiz Party which put an end to political pluralism in Parliament and tragically sealed the doomed fate of Shah’s Regime.

The 1960s saw the beginning of the end of dynastic rule in Iran.

But the emergence of modern Iran can be traced back four decades earlier to Reza Khan, who brought the Qajar dynasty, which had ruled Iran since the late eighteenth century, to a close in a 1923 British-backed coup.

With Reza Khan taking the throne in 1925, the Pahlevi dynasty was established, but was to span just two monarchs.

Between the two world wars, the Shah, as Reza Khan was known, quickly pursued a modernising agenda.

However, during World War II, and despite Iran declaring its neutrality, the Allies suspected the Shah of siding with Germany. As a result, Russia and the UK occupied Iran.

Reza Khan was forced to abdicate and the Allies replaced him with his son, Mohammad Reza Pahlevi.

Power struggles ensued between the Shah and a Qajar aristocrat and intellectual, Mohammad Mossadeq.

Mossadeq was appointed prime minister in 1951 and led a popular campaign for the nationalisation of Iran’s oil.

In 1953 the Shah was forced to flee the country but returned to the throne following a coup sponsored by US and British intelligence agencies in which Mossadeq was ousted. This marked the start of US influence on Iran.

The newly installed Shah, Mohammad Reza Pahlevi, pursued his father’s social and economic modernisation programme and became the first Muslim leader to recognise the state of Israel. He focused his efforts on consolidating ties with the US as well as his immediate neighbours.

His modern vision of Iran enjoyed some success and the status of women and religious minorities improved. But his reputation was marred by his excesses.

Corruption and cronyism were rife. He repressed political dissent and took power away from the clergy and conservative merchants, fuelling his unpopularity. That he was able to suppress dissent was in no small part due to the loyalty of the army.

Among the Shah’s critics was a Shia cleric, Ayatollah Ruhollah Khomeini, who opposed the Westernisation of Iran and the country’s ties to America.

He wished to overthrow the monarchy and replace it with clerical rule. His outspoken opposition led to his forced exile in 1964, but taped sermons continued to be smuggled into the country as Khomeini continued to build on his vision of an Islamic state.

In 1961, Panorama visited the country to ask just how stable and secure the Shah was, as the West’s view of Iran’s strategic importance continued to grow.

NOTE: Parviz Radji (who has been a harsh critic of the Shah’s last years of reign in his 1983 autobiography In the Service of the Peacock Throne, particularly for abandoning Hoveyda to his sad fate) say’s the Shah had NOTHING to do with the Coup. See : Ex Ambassador Parviz Radji interview by Cyrus KADIVAR)