Another Misfire by NIAC 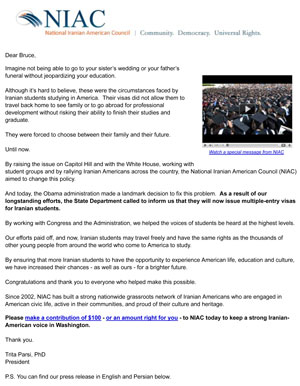 Today I received the following message from NIAC announcing that the Obama Administration has decided to allow Iranian Students attending US universities with Student Visas, that wish to go back and forth from the US to Iran, can now do so with an easier re-entry process.

Until now, an Iranian student from Iran, that had been granted a Student Visa allowing them to enter and study in the US, could not go back home for visits. If they did they would have to re-apply for a whole new Student Visa to come back to the US.

Given the realities and tension between US and Iran, this is not a bad thing. Although the number of Iranian Students who can afford to leave Iran and come to the US, is few indeed.

Fewer are the ones who can keep their noses clean politically in Iran, in order to be allowed to leave to study in the US. You’d almost have to be an apparatchik in Iran’s nepotistic system, or have an uncle connected somewhere high up in the system, just to be able to get an Exit Visa in order to leave Iran, and to come to a US embassy somewhere in the gulf and apply for a Student Visa.

Yes, in order to leave Iran, you actually need an Exit Visa. That’s a process where you have to explain why you want to leave your homeland to study abroad. Why on earth would you want to study in the US, an even harder argument to make.

But once you get your Exit Visa, and get yourself out of Iran, and manage to find a US Embassy that will allow you to apply for a Student Visa, and after sending you away a couple of times, then finally giving in and granting your Student Visa to the US, and you come to the US, and enroll in the US college of your dreams, now, thanks to NIAC you can risk it all and go back and forth to visit.

If you think that the grueling process of getting the hell out of an oppressive Iran with your life, and the hope you have built up in actually realizing a hopeful future for yourself away from the horrors Iran has imprinted on you, and now NIAC wants you to be able to go back, is a bit naive, I think.

While I think it’s always nice to be able to go back home, once you leave to go to college, everyone knows, you really can’t go back home. Even more so when your home is Iran, it’s literally on fire, and your country is being slowly drained of the blood of your peers.

Right! The first thing any Iranian Student lucky enough to win the lottery ticket out, is to want to go back! This is the valiant battle NIAC told me today, that they fought in my name for, and won. Even congratulating me on their job well done.

My recent posts have been trying to challenge NIAC to lobby Iran to change instead of the US. To me there is far more wrong there, and much more that is broken in Iran, that needs changing, than what is merely a reasonable US reaction to Iran’s many dangerous stances, and irresponsible precarious posturing. Given the US’s proclivity to using force in settling arguments of late.

Dear Bruce,
Imagine not being able to go to your sister’s wedding or your father’s funeral without jeopardizing your education.


Imagine a free Iran in which this wouldn’t even be an issue.

Although it’s hard to believe, these were the circumstances faced by Iranian students studying in America.

It’s not hard to believe at all, it actually makes total sense given the government of Iran has labeled Iran a “bad” country.

Their visas did not allow them to travel back home to see family or to go abroad for professional development without risking their ability to finish their studies and graduate.


That’s because the risks of “couriers” going back and forth to a terrorist state post 911 makes sense to regulate or prohibit.

They were forced to choose between their family and their future.

Temporarily. According to every study the reasons for an Iranian student coming to the US, is to either get away from the political oppression in Iran, or to get a US degree in order to be able to get a better job when you go back to Iran. Either way, this is obviously an internal Iranian socio-economic problem, not a US Student Visa problem. Ignoring this, ignores real problems in Iran that won’t go away after an Iranian Student successfully completes the degree and stays in the US, or if they ever go back.

By raising the issue on Capitol Hill and with the White House, working with student groups and by rallying Iranian Americans across the country, the National Iranian American Council (NIAC) aimed to change this policy.


Sorry to hear that, if you had asked me, I would have told you not to waste your time and instead go after the source of the real problem which is Iran’sinternal policies that make staying in Iran unbearable, dangerous, and pointless for Iranian Students, who value hope and the future. You wasted your time, the number of Iranian Students isn’t big enough to worry about, and I doubt many of them really want to go back and forth and risk the odd Airport security not liking the breadth of their smile as they try and get on the US-bound plane to come back.

And today, the Obama administration made a landmark decision to fix this problem. As a result of our longstanding efforts, the State Department called to inform us that they will now issue multiple-entry visas for Iranian students.

That’s not all they said, they also said, “…the United States is easing visa terms for Iranian students here as part of efforts to support their aspirations for political change back home… We want more dialogue and more exchange with those of you who are shaping Iran’s future. Because as long as the Iranian government continues to stifle your potential, we will stand with you. We will support your aspirations, and your rights,… And we will continue to
look for new ways to fuel more opportunities for real change in Iran.”

That sounds a lot like a Quid Pro Quo or you scratch my back, and I’ll let you in and out with an eased Visa program. Not that there is anything wrong with it, but by making this statement, Iran now has to be suspicious of a flood of students coming back to Iran from the US. And as we know, not all Students are Students. I expect the grilling and long interrogations and FaceBook and blogging cross checking at the airport in Tehran, to increase.

By working with Congress and the Administration, we helped the voices of students be heard at the highest levels.

Again, you could have talked about SO much more than Iranian Student Visas. I can understand picking your battles and trying to establish a track record of small victories, but it’s been 30 years. Everyone knows what’s wrong, what Iran needs to do and be, especially you NIAC, and to avoid the obvious in favor of the least important issue to fight for is my question.

Our efforts paid off, and now, Iranian students may travel freely and have the same rights as the thousands of other young people from around the world who come to America to study.

Bravo! Now let’s count the ones that choose to do so on our fingers. Meanwhile Iran burns, political prisoners hang daily, and even though we know this, we’ll all just sit on our hands and say and do nothing.

By ensuring that more Iranian students to have the opportunity to experience American life, education and culture, we have increased their chances – as well as ours – for a brighter future.

Except you’re not doing that. You are not doing anything to increase the number of Student Visas that the US issues, or making the application and review and re-application and re-review process any bit easier. Worse, you aren’t even addressing the process of getting an exit Visa from Iran. which is the starting point of this relatively pointless
journey.

Congratulations and thank you to everyone who helped make this possible.

Yes, by all means congratulations are in order. Yea! Hear! Hear! And a Hip Hip Hurrah! even. Iran’s still oppressed though.

No, Thank You. You’re certainly not doing what I want you to do, but in the end you’re doing
something generally positive, and deserve thanks just the same.