You Don’t Know Shit About My Iran 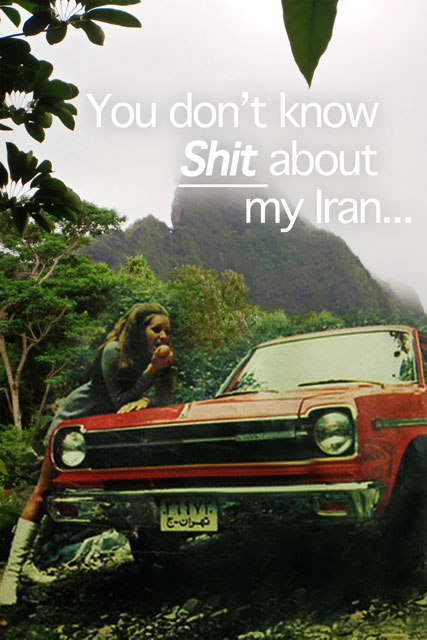 Originally posted on May 17, 2011 http://brucebahmani.blogspot.com

What is most frustrating about the US-Iran situation is that by now, 32 years after the 1979 revolution, all but a few remnants of what Iran was and the economic social level it had attained is all but gone.

Even in my own mind it seems memories are fast fading, instead replaced by images of the harsher reality of today’s “modern” Iran, which is a gulag of religious repression and bloodsucking horror that can best be experienced by seeing the film “Priest” currently in theaters across the US.

With that shameless Google search word plugged and weasled into this piece to ensure popularity among the predictive logic driven search engine robots that seem to dictate what we should be reading online these days, back to what Iran used to be.

This image which is one of the many magazine ads that ran in numerous magazines, shows a Rambler which used to be assembled in Iran, under the local nameplate of Arya (yes a mere n away from the infamous A-word) is possibly one of the best examples of what life in Iran used to be like before the cloud of stern finger wagging priests descended upon this planet, like human farmer aliens from far away NoFun, 3rd planet in the galaxy of BorDom.

This image, that of a happy girlfriend perched on and over her boyfriend’s car as they park off the main road in the countryside to enjoy the nature, the rivers, and streams, and hills and dales, and have a nice picnic, with hopefully dessert, represents the level of social freedom that Iran had attained up and until the great turn.

The assumed social mores of can’t date outside your tribe or social level, ridiculous. The assumption that Iranian (men and) women were traditionally prescribed to the religious veil, and that this is somehow a normal and natural cultural preference, utterly retarded. This shows a confident sexually and socially liberated Iranian woman, which is still to this day the norm, except you wouldn’t get that off of CNN because of the legally enforced veil. Even more telling is that her boyfriend who is off camera, probably preparing the picnic, owns the Rambler. Suggesting he is gainfully employed. Life, as depicted in this image, in Iran, is good. Hopeful, Heterosexual bliss.

This image in its simple entirety represents at once a future that seems was fast forwarded, in order to be specifically erased, and it is as if an evil Michael J. Fox has sped ahead in time, and deleted a key record of the past, that has now shaped the horribly different future we find ourselves trapped in.

That’s what I think Iran has become. That’s the coma I wake up to every day when I turn on the TV or read a website about Iran. Thankfully this image serves as a beacon of hope and a reminder and a key of sorts back what the real future of Iran should have been.

Now all we need is to find a way back so we can reset the exact moment that the aberration occurred, and things should be back to normal. The problem is that 30 years later, there are so many aberrations to reset, that there’s no way to know exactly which knob to turn.

As Mr. Fox’s partner the esteemed Doctor Emmett Lathrop Brown will tell you “Don’t worry! As long as you hit that wire… with the connecting hook at precisely 88 miles an hour… the instant the lightning strikes the tower… everything will be fine.”