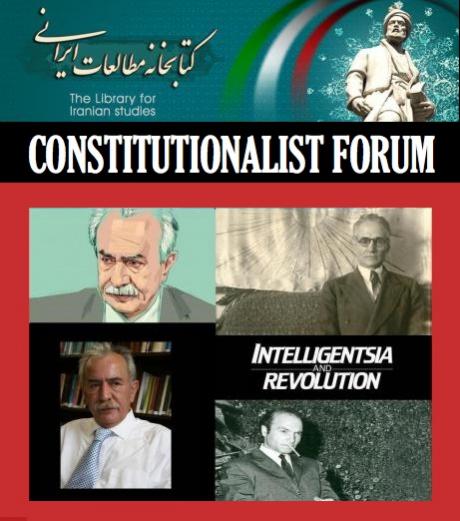 BBC Hard Talk with historian Dr. Mashallah Ajoudani member of the Library of Iranian Studies. The Topic is the role of Intellectuals and the Revolution of 1979 as well as the drift between Secular Modernity and Religious Activism.

Mashallah Ajoudani debates with Fatemeh Haghighatjoo on the incompatibility between Religion and Human Rights ( VOA Persian):

Mashallah Ajoudani on Enghelabe Mashrote Iran aka the Constitutional Revolution and The Pahlavi Dynasty’s Achilles’ Heal (i.e: Lack of Political Freedom) and pros & Cons of Their progressive minded Dynasty :

Shohreh Aghdashloo introduces a Speech by the Late Shahpour Bakhtiar to Iranians in LA:

SOURCES OF FURY:Nader Naderpour on origins of IRI’s “Death Slogans” towards US and Israel:

The late Iranian poet, historian, philosopher and constitutionalist Nader Naderpour explains how slogans such as “Death to America” and “Death to Israel” took root in Iran with the Islamic Revolution slowly replacing in the political rhetoric Persia’s traditional foes which initially were Great Britain and Russia.

Tajzadeh ( his name means “born with a Crown”) speaks about all the social Freedoms which existed prior to the revolution and Khomeiny’s desire to change the Constitution.

Mashallah Ajoudani was born in 1950 in Amol (Mazandaran, Iran). He obtained his Master degree and PhD in Persian language and literature from Tehran University. He was a student of famous scholars such as Ahmad Mahdavi-Damghani, Seyed Ja’far Shahidi and Abdulhossein Zarrinkoub. His doctorate supervisor was Dr. M.R. Shafi’i-Kadkani and the title of his thesis as: Critical Study of the Poetry of the Constitutional Era

Ajoudani worked for nearly seven years as an Assistant Professor in the Department of Literature & Humanities at the University of Isfahan, teaching classical and modern Persian literature texts

In January 1987, he came to Britain and cooperated with late Manuchehr Mahjoubi, the editor-in-chief and publisher of Fasl-e Ketab, in publishing this journal and from the beginning he was the editor of this publication. All together, thirteen issues of this journal were published in London

Ajoudani is a founder member and the chairman of the Library for Iranian Studies (the largest Iranian library outside Iran) in London since 1991. He gives weekly lectures on poetry of Hafez and Rumi as well as topics in Persian mysticism

His first book: “Mashroute-ye Irani va Pish Zamineha-ye Nazariye-ye Velayat-e Faqih” (Iranian Constitution and the Background to the Guardianship of the Jurisconsult) was published in London in 1997

His second book: “Ya Marg Ya Tajaddod” (Death or Modernity) is a collection of nine articles, which have been written and published in the past 18 years inside and outside Iran on the poetry and literature of the Iranian Constitutional Era

In addition to these books, he has published more than 50 short and long articles in publications in Iran and abroad and his latest book: ”Hedayat, Boof-e Koor and Nationalism” was published in London in December 2006. This is a different literaryreview and critique of “Boof-e Koor” and other Hedayat’s works within the historical and cultural context of the modernity era. “Nationalism”, as one of the most important subject matter in Hedayat’s writings, is a pivotal point of discussion in this book.

SOURCES OF FURY:Nader Naderpour on origins of IRI’s “Death Slogans” towards US and Israel