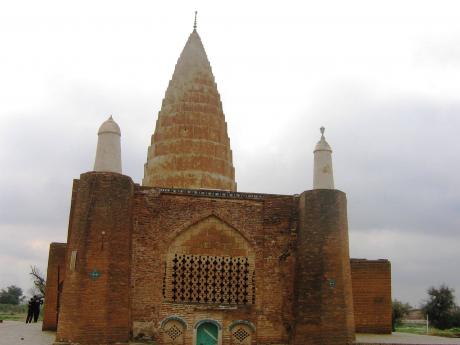 Among all images from my history books in school, a few are fresh in my mind. One is a drawing of Yaqub Leis, the founder of Safarian Dynasty. I still remember the details, a man with bread and onions on a tabelcloth (sofreh) in front of him, and the message to Abbasid Qalif that he would never give up his fight against the Qalif.

I admired him then, and I admire him now. This time, when traveling in Iran, I visited Dizfoul in Khouzestan. To my amazement, I found out that the city held the tomb of Yaqub Leis. I rushed there to pay my respect. And there it was, about ten kilometers from the city. It was a curious feeling, lamenting, longing, admiring.

I couldn’t get in; the entrance was locked. A few people had made a fire beside it and prepared to grill something I suppose. I often wonder at the unconscious state of some people around something so great, so overwhelming as the presence of a man who did so much, who could still teach us so much.

My apologies for the poor photo; I just wanted you to remember him.