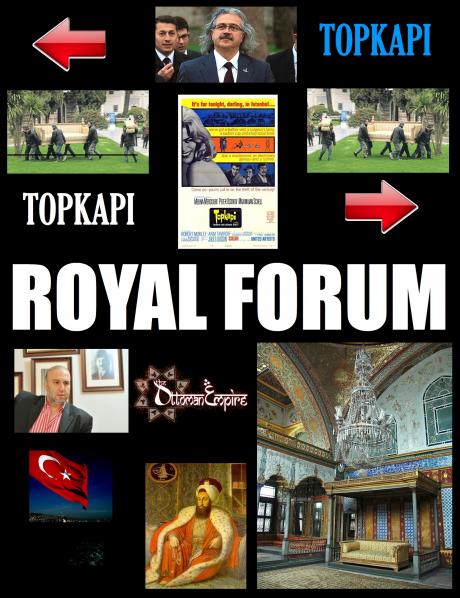 Members of the Ottoman dynasty have reacted furiously to reports that a priceless throne was taken out of the Topkapı Palace Museum’s Harem section and haphazardly carried off to the museum director’s personal residence. (See Related News)

Turkish TV Report on the Incident :

Caper film about the theft of a jeweled dagger from an Istanbul museum. Starring Melina Mercouri, Maximillian Schell, Robert Morely and Peter Ustinov

Topkapı Palace (Topkapı Sarayı in Turkish, literally the”Cannongate Palace” – named after a nearby gate), located in Istanbul (Constantinople), was the administrative center of the Ottoman Empire from 1465to 1853. The construction of the Topkapı Palace was ordered by Sultan Mehmet IIin 1459. It was completed in 1465. The palace is located on the Seraglio Point between the Golden Horn and the Sea of Marmara in Istanbul, having a splendid view of the Bosphorus. (41.00’43.09″ N, 28.59’00.55″E) It consists ofmany smaller buildings built together and surrounded by four courts.

The Last Ottomans:
Part of a Documentary on Diaspora Turks belonging to the Last Ottoman Royal Family who  have been living in exile scattered between Europe and North America ( English Subtitles and French, Turkish dialogue)

Members of the Ottoman dynasty have reacted furiously to reports that a priceless throne was taken out of the Topkapı Palace Museum’s Harem section and haphazardly carried off to the museum director’s personal residence.

“I have yet to understand the nature of this negligence, this callousness,this non chalance toward our history. I feel repulsed by this disregard for an empire [that lasted] for centuries,” Orhan Osmanoğlu, one of the descendants of the Ottoman dynasty, told the Hürriyet Daily News.

“I cannot speak on behalf of my family, but if this incident has really occurred, and if some people bear the responsibility for it, then I am determined to pursue this [case],” he added.

Osmanoğlu said he could not believe what was going on and was following the news about the throne, which once belonged to Sultan Selim III, as it unfolded on Internet news portals. He added that he would file a complaint at the prosecutor’s office as soon as he came back from a business trip to Egypt.

Were the Ottoman dynasty still in power, Osmanoğlu would be the crown prince today. His father, Harun Efendi, was a fourth-generation descendant of Sultan Abdülhamid II who ruled the Ottoman Empire for about three decades until he was toppled in 1909 by the Committee of Union and Progress.

“It must not be forgotten that these artifacts are the national assets of the Turkish Republic. As such, the [Ottoman] family can claim no property rights [overthem.] I would only like to add that it is out of the question for such important artifacts, which constitute part of [our] national heritage, to be used for private ends,” said Erkan Murat, a close acquaintance of the Ottoman family.

Murat said he understood fully the family’s sensibilities regarding the issue and added that, in the end, the Ottomans simply wanted to claim their own history.

Culture and Tourism Minister Ertuğrul Günay told the Daily News that he has launched an investigation concerning the incident and that further details would be disclosed later on.

The chairman of the Topkapı Palace Museum, İlber Ortaylı, also said he did not want to issue any comment out of his respect for Günay, although he did express his embarrassment at the fact that the alleged incident had taken place without his knowledge.

Osmanoğlu said he had not been able to contact Ortaylı and that he would meet with him as soon as he returned to Turkey.

“Mr. Ortaylı has always held our family and our history in high regard. I cannot and do not want to presume that such a magnificent person as he could possibly be responsible for such negligence,” Osmanoğlu said.

Photographs showing the throne being casually carried around were circulated, although the museum’s director, Yusuf Benli, flatly denied the accusations. The throne was also reportedly kept under the rain in front of the main entrance of his residence, since it did not fit through the doorway, according to reports. The throne was then reportedly sent off to the museum storage.

Benli is also accused of serving his visitors breakfast on historical pieces. A Louis XIV-style marble table decorated with paintings reportedly has stains on it that cannot be removed.


UP CLOSE & PERSONAL: Jordan’s King Abdullah II takes You on a Royal Tour

ROYAL FORUM: The Pain in the Reign in Spain

ROYAL FORUM: Prince Charles and Camilla’s Car has been attacked by protesters

ROYAL FORUM: Behind the Scenes of Queen Elizabeth II’s Coronation in 1953

PrevPreviousملت کشور کثیرالملۀ ایران
NextMark Dankof to Congressman Ron Paul: You Need to “Find It” Buddy! And Fast. . . .Next