Why Iranians are Incapable of Outrage (WARNING: profanity and so on) 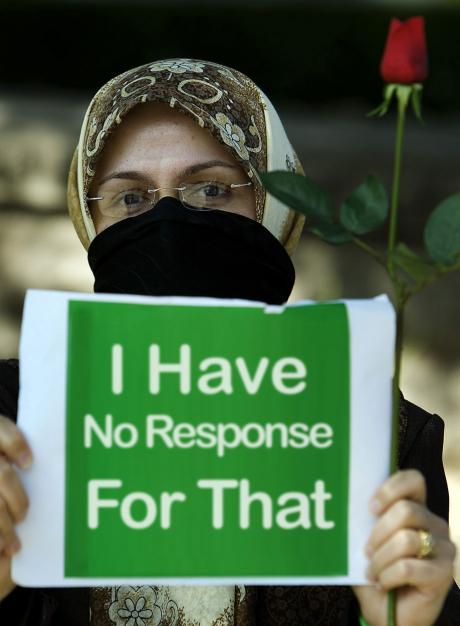 I have been getting a lot of this, “Bruce, what happened to the Green movement in Iran? With all the uprisings in the Mid-east, how come Iran is so quiet these days?”

There is no single 1 sure answer, but there are 2 good reasons. And a 3rd theory, the primary basis of my article.

First, after the last series of street protests this past February 14th, 2011, the flickering embers of the massive 2009 protests in response to the controversy and fraud-ridden Iranian Presidential election, the security forces and Basij militia in Iran clamped down on any Iranian dissent, harder than jewelry on Janet Jackson’s nipples.

Virtually any gathering of even more than 3 people on a street corner just to cross, is immediately targeted and people are told to move on or disperse. The slightest objection or hesitation will land you in jail or prison, often without any charge or warrant or claim, all depending on how compliant and sorry you are, or if you show any “attitude” towards the authorities.

So the same look and guilty condemnation that you got from Sister Christian during Sunday School, when she rapped your knuckles with her ruler, because she thought you were the one talking in class, that’s how they get you. Church-style! “You can’t have any pudding until you eat ye’r meat!” style.

Second reason Iran is quiet these days is that just because everyone tends to like Green as a color, especially these days with all the environmentalism everywhere, that doesn’t necessarily mean that all those youth we saw in 2009, was ever really on any sort of path to reform. It may have just been a page, and not the rampage everyone expected of it.

People better than me, are still studying the phenomenon, and haven’t yet been able to decipher exactly what the protests of 2009 were all about, in the end. Certainly no one is claiming to know, for sure.

Which brings me to the theory. As with all my theories, it’s mine, with not a shred of evidence to support it (yet!), and of course subject to a hell of a lot of skeptical second guessing, with the usual accompaniment of disbelief and doubt.

But I think you might agree that it is a damn good one. An interesting observation to say the least. Possibly even ludicrous. But absolutely not Ludacris.

In order to lay the basis of my theory, we need to first establish what Outrage is, and what the traditional forms of expressing outrage have been, or are today.

In the West, when someone wishes to express outrage, they usually have a distinct word or words in their collective social vocabulary, or the cultural vernacular that are used. Often these are the most expressive words, commonly predicated upon slang, and from slang it is an easy slide right down into downright profanity.

The best example of this kind of expression of outrage in the US is “FUUUUUCK!”

Iranians being all about social politeness, do not have a word or even a combination of words that are as guttorally satisfying to say, or exclaim when they are extremely frustrated, as “FUUUUUCK!”

That’s it. That’s my entire theory on why Iranians cannot express outrage.

In Persian or more correctly Farsi, even if we bring in the informal and rarely analyzed Farsi slang, there is no word for “Fuck”. Nevermind “FUUUUUCK!”.

I am sure we can all agree that “FUUUUUCK!” is pretty much required for any thriving democracy to succeed.

Absent any definitive word, complete with a past and present tense and no dangling participles, the closest word for Fuck in Farsi, is “Do”, or “Did”. Oddly enough, usually within the context of some kind of domesticated animal.

There is no Done, since that implies you being done, and an Iranian will never admit that he was ever done, by anyone.

As you can see, walking out in a public square yelling “Do!” or “Did!” just doesn’t quite have the same amplification of urgency as “FUUUUUCK!”

The same goes for “FUUUUUCK YOOUUUU!”

There is also no Farsi term for the derogatory, “Fuck You”. Certainly nothing even close to telling someone, preferably in authority, to “Fuck Off”.

The sheer potential for release of pure anger, and even truer frustration, that the word “FUUUUUCK!” offers others, is entirely and utterly absent from the entire Farsi language.

The closest there is, is not even a word but the exclamation “Voy!” which if it sounds the least bit gay, is, but is also strangely Yiddish, so I’m going with that, as its etymological root. Regardless, you can’t fling rocks or Molotov cocktails while yelling “Voy!” either.

So what were all those Iranian protesters screaming and shouting, if they don’t have any good quality words that are good for expressing anger and frustration in response to 30 years of rule by an unruly religion?

Many were downright poorly crafted and not easy or funny to say, and none of them were even naughty limericks, and about the worst one was the polite, “Death to Dictator!” which if you as a non-Iranian think is unclear, imagine the confusion on the street, given it could have meant Ayatollah Khamenei who is the Supreme Leader of Iran and therefore a real Dictator, or it could have been in reference to Ahmadinejad and his stolen election.

So even when Iranian outrage is specifically pointed, it’s still quite vague. Sort of.

Maybe when Iranians develop an appropriately uncivilized word for “FUUUUUCK!” in Farsi, that can be used to express exactly the right level of outrage that the people feel towards the oppression that continually seems to beset them, they will be able to move towards changing their lot.

In the meantime, the rest of the world can show it’s collective support for freedom deserving Iranians, by saying “FUUUUUCK!” for us.

Fine, if you need to be PC, I’ll accept WTF!