Fereydoun Farokhzad 10 days Prior to his assassination 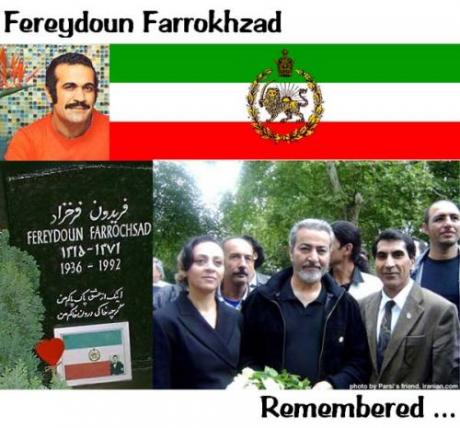 Entertainer, poet and intellectual Fereydoun Farokhzad in Sweden ten days prior to his assassination invited to a conference to speak about his famed sister, his own art and Iranian struggle for Freedom and Democracy. This was exactly 10 days before his assassination in Germany on August 6th 1992.


Farrokhzad’s last public appearance in Sweden 10 days before his assassination:

Fereydoun Farrokzad was first and foremost a great entertainer, a gifted artist and most probably one of the most outspoken Iranians be it before or after the revolution that shook his belovedcountry and was to ultimately destroy everything he stood for. He was a lover of Beauty and the Arts. He was the brother of one of Iran’s greatestcontemporary poets, and militant feminist: Forough Farrokhzad, who also died in a tragic car accident in the late1960’s. Fereydoun Farrokhzad was also quite openly a Constitutional Monarchist singing in London to honor the death ofthe Imperial Army officers who died during the failed Nojeh Coup, that ultimately set him on the Top of the Blacklist of the Islamic Republic’s DeathSquads. It would be hypocritical and inaccurate to claim the contrary in the name of political correctness or in the name of one’s personalpolitical convictions or preferences. Farrokhzad never denied it be it in private or in public that he was faithful to an Era which benefited to hisprofessional life and success. However to boil him down to a royalist activist and/or royalist icon would be equally reductive. He was one of the GreatIranian Entertainers of his time who truly revolutionized the Iranian Entertainment Scene and Television Shows. He was often copied, imitated butnever equaled. It was also because of his professionalism and work ethics that he turned his back on the mediocrity of many LA based TV channels and programsbecause he was disappointed by their lack of sincerity and faith to the cause of freedom of Iran and Iranians. He spent his personal fortune and energy torally Iranians against the Islamic Republic by performing worldwide in any major European or American  where there was an Iranian community be itLondon, Toronto, LA, New York or Paris. His closest friends and advisors would vainly try to convince him to stop making vehement patriotic speeches orcriticizing openly the clerical regime of Tehran but it was useless for Farrokhzad was not a man to be intimidated by anyone. He believed in EVERY Wordhe uttered and his stamina and bold comments would stir passionate reactions from his fans and critics alike. He was a Professional entertainer whodisguised his inner anguishes with a Big Smile. Farrokhzad was deeply attached to his country and countrymen maybe more than any other artist and compatriotof his generation. A man who could be seen in the company of beautiful women and enjoying the company of his friends and fellow colleagues like Aref,Sattar, Mahasty or Googoosh, equally in times of Popularity as well as in times of exile was in fact a solitary who like most artists overcome their innershyness and inhibitions by overcoming them in the public eye.

Given Farrokhzad’s popularity and stamina that was threatening the Iranian Theocracy’s foundations and reputation outside Iran,

the Islamic Republic tried to undermine Farrokhzad’s reputation. He was falsely accused of sexual depravity and even bisexuality, all of which were pretexts todistract public opinion on his ever growing popularity within a politically divided Iranian Diaspora. Fereydoun Farrokhzad understood the pain of othersand would often interact with his audience to pull them towards more solidarity and compassion for their fellow compatriots. During his lifetime, many unjustlyfelt he was overdoing it, but ultimately and to the Very End, he fought like a Lion for the honor and Freedom of his country. Not surprisingly, the Islamicrepublic’s agents operating in Germany assassinated him at his home in Bonn On August 9, 1992. Three days later his body was found lying in a pool of bloodwith his dog whimpering beside him.

PROUD TO BE IRANIAN AND A MONARCHIST: Fereydoun Farrokhzad Up Close and Personal (Mid 1980’s)