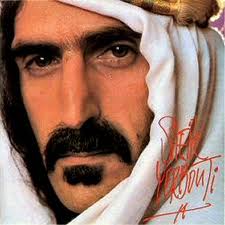 Frank Zappa was one of the most innovative and influential, but also controversal rock-musicians. His huge oevre covered jazz-rock classics like “Peaches in Regalia” , but also some top ten hits like “Don’t eat that yellow snow” and “Bobby Brown goes Down” from the 1979 album “Sheigh Sherbouti”.

In 1970 Zappa met Zubin Mehta, conductor of LA Philharmony Orchestra and descendent of an indian Parsi family. Zappas Mothers of Invention and Mehtas Orchestra played together the concert 200 Motels.

Even though his lyrics became more and more complex, and political messages woven into satirical stories, Zappa never left any doubt what he thought about the Washington establishment and religious bigotry. In the video to the fusion-jazz piece “You are what you is” he calls Ronald Reagan a president from hell. I was always wondering how Zappa, wouldn’t he have died too early in 1993, could bear to live in a country that 10 years later was lead and send to war by the lunatic George W. Bush.

On September 19, 1985, Zappa testified before the United States Senate Commerce, Technology, and Transportation committee, attacking the “Parents Music Resource Center” (PMRC), a music organization co-founded by Tipper Gore, wife of then-senator Al Gore. The PMRC consisted of many wives of politicians, including the wives of five members of the committee, and was founded to address the issue of song lyrics with sexual or satanic content. Zappa saw their activities as on a path towards censorship.

His high sensitivity for political oppression was seen during production of the 1979 triple LP Joe’s Garage, comprising a rock opera about the danger of political systems, the suppression of freedom of speech and music. Inspired in by the Islamic revolution that had made music illegal within its jurisdiction at the time, it also addressed the “strange relationship Americans have with sex and sexual frankness”.

Whether one likes Zappas very open political statements, denouncing the hypocrisis of the western moral standards and their corruption by the political system, or not, whether you think his language is sexist and chauvinistic or just right to fight the political correctness, one thing about him remains that nowbody can deny: That he was one, if not the most productive, independent, intelligent and influential musicians of the 20s century.

It is sad that he died before experiencing how a new generation of iranians will reinstall freedom, music and creativity in Tehran. I’m sure he would have greeted the green movement with highest sympathy.