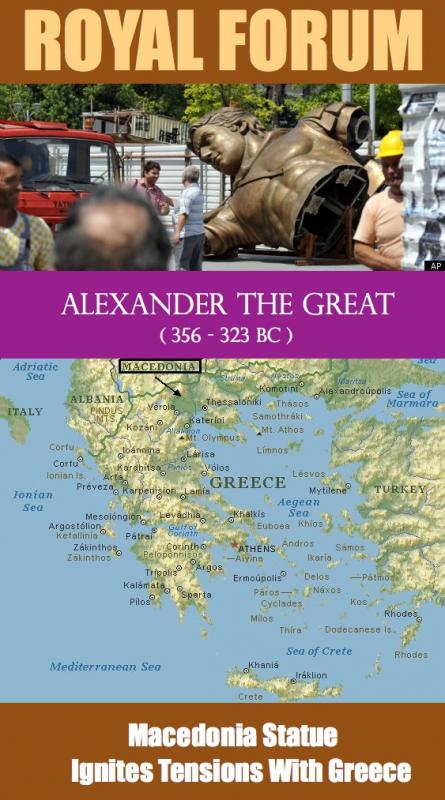 Macedonia has inflamed long-standing tensions with its neighbour Greece by unveiling a $13m statue named ‘Warrior on a Horse’ in the country’s capital. Both countries claim Alexander as their own.

Macedonia statue ignites tensions with Greece (Al Jazeera):
Macedonia has inflamed long-standing tensions with its neighbour Greece by unveiling a $13m statue named ‘Warrior on a Horse’ in the country’s capital. The statue closely resembles Alexander the Great, the former king of Macedon who is claimed by both countries as their own.

SKOPJE,Macedonia — Macedonia on Tuesday began assembling a controversial 22-meter-high (72-foot-high) bronze statue of Alexander the Great, a monument seen as a towering challenge to neighboring Greece’s claim on the ancient hero.

Giant pieces of the monument were brought Tuesday to a cordoned-off area in the heart of Macedonia’s capital, Skopje, where construction of a pedestal is still under way. Over thenext few days, cranes will be used to put together the parts of the statue,which some critics have accused of being a hubristic waste of money and the government says is an important part of city redevelopment.

Although the statue isofficially named “Warrior on a Horse,” the face closely resembles ancient depictions of Alexander, the warrior king born in Pella, northern Greece, who carved out an empire that reached the Himalayas before his death atage 32 in 323 B.C.

Greece and Macedonia remain locked in a 20-year dispute over the right to claim the region’s ancient heritage, with conservative Macedonian Prime Minister Nikola Gruevski on adrive to pin ancient labels on the country’s airports, highways and football stadiums – and now in Skopje’s main square.

The two Balkan neighbors have failed to resolve a name dispute that has blocked the tiny republic’s accession to NATO and progress toward becoming a member of the European Union.

Athens accuses its neighbor of falsely laying claim to its ancient heritage, and demands that the former Yugoslav republic modify its name so that it doesn’t imply a territorial claimto its own, larger, northern region of Macedonia.

Macedonia, which gained independence from Yugoslavia in 1991, argues that its has been treated unfairly by its more powerful neighbor and says a 1995 agreement to change its constitution and flag should have ended any argument over potential claims onterritory.

Many of Gruevski’s critics in Macedonia voiced strong opposition to the statue project when the plans were first announced two years ago, arguing that it promoted nationalism, and thatthe venture was too costly in a country with staggering 32 percent unemployment. Several prominent architects also worried it would blight thecity’s skyline.

The statue will cost an estimated euro5.3 million ($7.7 million). The monument, designed by sculptor Valentina Stevkovska, is 12 meters (39 feet) tall and willbe placed on a 10-meter (33-foot) fountain pedestal. The statue’s parts were built in Florence, Italy.

Alexanderis Back by Darius KADIVAR