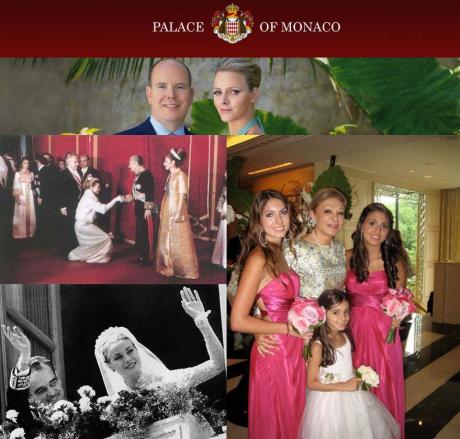 Shahbanou Farah will be amongst the numerous heads of State including Reigning Royal Families to be present at the Wedding of Prince Albert II of Monaco and Charlene Wittstock. Due to security reasons It is still not clear if other members of the Pahlavi Family will attend. The Principality of Monaco and Iran’s royal family have had long lasting friendly ties over the decades. The Rimaldies were amongst the rare Heads of States along with Egypt’s Anwar El Sadat to extend their hospitality to the exiled Shah and his family including assylum which the Shah kindly declined in order not to trouble the Principality.

Royal romance on the Riviera : Interview with the Princely Couple (Euronews):

On July 1st and 2nd – Prince Albert and Charlene Wittstock will be married – the extravagant celebration will involve a civil ceremony followed by a religious ceremony the next day. Euronews caught up with the couple where they shared some of their thoughts and emotions ahead of their wedding.

Grace Kelly leaving for Monaco for her wedding to Prince Rainier :

Currently Known Celebrities and Heads of State Included in the Guest List are as follows:

Demi Moore and Ashton Kutcher could well there to celebrate with Albert and his bride. The couple were reportedly spotted at Charlene’s New York bridal shower back in April with Karolina Kurkova.

Mel Gibson is also a friend, having forged a friendship with Monaco’s sovereign during their joint conservation campaigns. They were seen catching up at this year’s Cannes Film Festival.

Karl Lagerfeld, chief designer at Chanel, has dressed Princess Caroline and her daughter Charlotte Casiraghi for years and is definitely going.

So too is Albert’s longtime friend, Swedish model Victoria Silvstedt (above left).

It’s likely Sir Roger Moore will attend. The former 007, who spends summer at his house in Monte Carlo, was thrilled about the engagement, enthusing: “It’s wonderful we’re going to get a new princess”.

Boris Becker should be on hand after Albert attended his own wedding in 2009.

What’s not so clear is if Albert will invite some of his former flames, who include Naomi Campbell, Claudia Schiffer and Brooke Shields. Both Charlene and Albert are regularly seen socialising with Naomi on the social circuit (above right), and the trio seem to get on well.

Away from the celeb world, there’ll be many guests from the Olympic family, headed by the president of the IOC Jacques Rogge.

There will almost certainly be a place for Albert’s Olympic bobsleigh colleagues (pictured below). The prince competed in five Winter Games and he is still close to Mark Thomas, a former brakesman on his team and a vocal supporter of Charlene’s. He describes her as “a great people person”.

“She has carried herself with great dignity throughout their courtship. They share great friendship and love. Above all they are best friends. She has a vibrant personality and will be fantastic for Monaco”.

From Charlene’s sporting past, pro swimmer Sarah Powe has been invited. The 28-year-old – who has dual German and South African nationality – shared rooms with Charlene when they both competed in events. “She was like a big sister to me,” she says.

Australian swimmer Sophie Edington will also be attending, as will glamourous German swimming champ Franziska van Almsick – both friends of the bride.

Twenty-one heads of state, including President Nicolas Sarkozy and his wife Carla Bruni, have been invited.

Albert has also included his surviving relatives in America, from his mother’s side. His cousin John B Kelly III, son of Princess Grace’s brother Jack, is looking forward to attending with daughter Katherine and son Nicholas.

It’s not known if Albert’s two children will be at the wedding. He is father to seven-year-old Alexandre, and 18-year-old Jazmin – both from previous relationships.

The royal contigent will include the Earl and Countess of Wessex, to whom Charlene has formed a special attachment.

As are Sweden’s King Carl Gustaf, his wife Queen Silvia and their children, including heir to the throne Crown Princess Victoria and her husband, Prince Daniel.

Meanwhile, the King of Spain, Albert’s godfather, will be represented by his son Crown Prince Felipe and daughter-in-law Crown Princess Letizia.