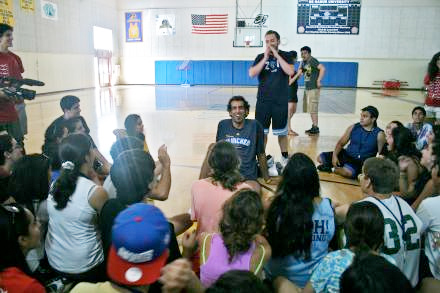 Memphis Grizzlies center Hamed Haddadi surprised campers with a visit at the NDNU campus yesterday for an afternoon of basketball and prizes.

The awestruck campers first had a Q&A trivia with Haddadi including the opportunity to win prizes in order to learn about his experience as an Iranian NBA player. This was followed by a series of basketball games in which one camper won a signed jersey.

Finally, there was a camp-wide shoot off that allowed two lucky campers to win Haddadi’s signed sneakers. After an exciting afternoon, we got together for a group picture and said our goodbyes to Haddadi as the campers remained with smiles from ear to ear.