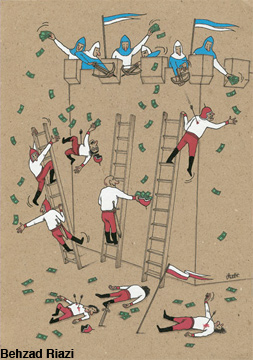 On August 2, Tehran distributed a sixth installment of cash payments to 73 million Iranians in lieu of subsidies on fuel, natural gas, electricity, and essential items such as bread. Having done the easy part of its subsidy reform — sending out checks to compensate for price increases — the regime must now do the hard part: raise the money to pay for those checks and find a way to help businesses badly hit by the higher prices. Tehran should be able to meet that challenge as long as its oil income remains high, but if oil prices drop or sanctions impede financial flows, it could face serious problems.

In terms of actually distributing the checks to households, the regime has been effective. In recent years, it has supplemented the longstanding and chaotic identification system based on hand-issued birth-certificate booklets with a computerized national ID card, which is better able to control fraud. To be sure, a July 2011 paper by two International Monetary Fund (IMF) staffers and an Iranian official reported that two million of those receiving checks live abroad and should not have been eligible.

The other side of the coin is getting money to the poor, many of whom do not have bank accounts. The regime seems to have been quite successful at getting this constituency “banked,” as the phrase goes. Iran’s banking system has deepened its reach in recent years, partly through the creation of numerous private banks and the conversion/consolidation of 1,200 credit unions into thirteen banking firms. Even more important, thousands of Postal Bank “offices” (as distinct from full-service banks) have been established in rural areas with enough accounts to cover up to a quarter of the country’s 22 million rural residents.

To be sure, if the checks are going to 71 million Iranians as reported (discounting the 2 million recipients abroad), and if the official October 2010 population estimate of 74.7 million was correct, at least 3.7 million people are not getting paid. For instance, Iran’s impoverished Afghan immigrants, who number well over a million, are not eligible. In general, though, the poor have gained much from the subsidy reform.

Currently, the payments, having been raised twice, are 455,000 Iranian rials per person per month, equivalent to $41. Virginia Tech economist Djavad Salehi-Isfahani has estimated that poor Iranians — those in the bottom 10 percent of the income distribution — are receiving seven times more than the extra costs they pay due to the removal of subsidies. That means a net monthly gain of IR1.6 million for a four-person household, more than 35 percent of the minimum wage of IR4.3 million per month (including the various monthly allowances and a year-end bonus). Many rural and informal workers can only dream of getting the minimum wage through regular employment. Not surprisingly, then, the poor have not objected to this reform.

Even for the top 10 percent of earners, the checks cover nearly all the additional costs from raising prices, according to Salehi-Isfahani’s calculations. And that is assuming people actually pay their much higher natural gas, electricity, and water bills. In April, Deputy Oil Minister Javad Oji acknowledged that 30 percent of consumers had not yet paid their latest gas bills, and press reports suggest the figure could be higher.

PAYING FOR THE CHECKS

The Iranian government’s Working Group for Economic Reforms reported that the August 2 checks cost IR330 billion, or $3 billion, for one month (see www.tahavolateeghtesadi.ir). Extrapolating that figure results in an estimated $36 billion per year. According to an August 3 IMF report on Iran’s economy, the regime will earn $103 billion in oil and gas export revenue during the 2011-2012 fiscal year. If so, the checks will take up 35 percent of these earnings.

Tehran is not leaving itself much room for maneuver. The IMF forecast assumes an oil export price of $102 per barrel. Yet the price was $66 just two years ago; if it fell to that rate again, Iran’s revenue would drop to $66 billion, and the compensation checks would eat up 60 percent of that amount.

Even apart from price fluctuations, however, sanctions seem to be impeding Iran from receiving payment for oil exports. According to a July 25 Financial Times report, “Some Iranian officials are growing increasingly angry about the inability of the country’s largest oil customers to pay cash.” That includes China (which reportedly owes as much as $30 billion), India ($5 billion), and South Korea ($5 billion). These reports should be kept in mind when evaluating Iran’s claim that its extensive foreign exchange reserves will let it ride out a drop in oil prices or pressure from sanctions. The IMF report shows $78.9 billion in foreign exchange reserves in March 2011, but much of that may not be readily available — frozen by sanctions or court action.

To be sure, Tehran does not have to rely on hydrocarbon income alone to fund the checks. In its first year, the reform is supposed to raise $20 billion in additional revenue due to higher prices for domestic consumers. Yet it is by no means clear that will happen. And as explained below, the regime will have to devote some revenue to compensating industry in addition to funding the household checks.

Many Iranian industries have remained competitive only because of their access to cheap subsidized energy, which is now ending. Factories that were built using energy-intensive technologies cannot readily change their business model when energy prices rise, robbing them of their sole advantage over tough Chinese competition.

To help businesses adjust, the Iranian parliament’s subsidy reform law mandates that 20 percent of the compensation go to production units and 80 percent to households. With $36 billion going to households, that would mean $9 billion to industry, for a total annual compensation bill of $45 billion. But the industry payments do not seem to be happening at the promised rate. In late June, economist Jahangir Amuzegar, citing the Majlis speaker and the head of Iran’s Chamber of Commerce and Industry, reported that companies had received no more than one-eighth of their share thus far. Another report estimated that only $1 billion had been distributed to production units in the first six months of the reform.

Faced with higher costs, the natural instinct of businesses is to raise prices, and this is happening in Iran to a certain degree. Surprisingly, however, Iran’s Central Bank has adopted a strict monetary policy that has limited price increases, forcing businesses to absorb much of the higher energy costs on their own. Predictably, many energy-intensive businesses have become unprofitable. Widespread reports about factories unable to operate have raised concerns that unemployment — which the government has already acknowledged is up sharply this year, to 14.6 percent — will only climb higher.

One solution for restoring the competitiveness of Iranian industry is devaluation, which would make imported products more expensive than Iranian-made ones and greatly increase government revenue from each dollar of oil exports, allowing Tehran to more readily finance the household checks. Devaluation would also make excellent economic sense: the IMF reports that Iran’s “real effective exchange rate” has tripled over the past fifteen years (which the report sees as fine — perhaps so, as long as high oil prices pay for everything). In fact, Tehran took the devaluation route in the 1980s, when the free-market rial fell to 10 percent of its initial value over the course of the decade. The regime is unwilling to go this route today, however, because devaluation would raise prices on the imported goods to which Iranians have become accustomed — a development that could lead to considerable popular discontent.

By devoting much of its oil and gas earnings to public cash payments, Tehran is locking itself into a situation where it has little margin for error if its hydrocarbon revenues decrease. If oil prices decline — or, more important, if the United States and its allies can dissuade countries and companies from paying for Iranian oil (Washington has no objections if they receive said oil, only if they pay for it) — then the Islamic Republic could face serious problems paying for the checks to which the Iranian people are rapidly becoming accustomed. In short, the regime had made itself more vulnerable to outside pressure — a fact worth bearing in mind when considering what leverage the West can wield against Iran’s nuclear program.

AUTHOR
Patrick Clawson is director of research and head of the Iran Security Initiative at The Washington Institute.