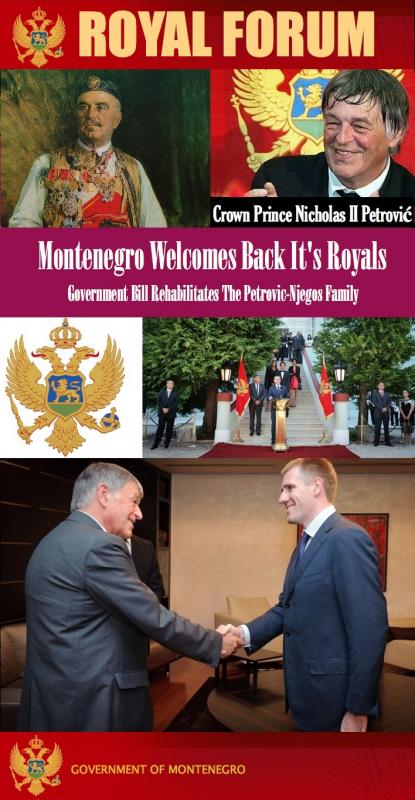 Prince Nikola was officially welcomed by Montenegro’s President and Prime Minister in the former royal capital of Cetinje. Is it possible that Europe will have its 11th monarchy soon? All the more that the National Flag of the Republic of Montenegro has maintained it’s Royal Coat of Arms (see Here) based on the royal standard of King Nikola I which was adopted on 12 July 2004 by the Montenegrin legislature.

Prince Nikola was officially welcomed by Montenegro’s President and Prime Minister in the former royal capital of Cetinje.

Montenegro’s Crown Prince Nikola II Petrovic says he is “entirely satisfied” with a law rehabilitating his family, which was dethroned in 1918. According to the Associated Press the Legislation approved earlier this month recognizes the family’s historic role and its male lineas descendants. The law says the Petrovics were dethroned when Montenegro was “violently annexed” by Serbia in 1918. Is it possible that Europe will have its 11th monarchy soon? Or is it all homage paying to a country’s former royal family?

Prince Nikola was officially welcomed by Montenegro’s President and Prime Minister in the former royal capital of Cetinje. He was given use of the first floor of the former royal palace, and bestowed with former honours and rights and named special representative for the government of Montenegro.

The government has also promised to pay 4.3 million euro ($6.13 million) into a family fund over the next seven years, and pay Crown Prince Nikola a monthly salary that equals that of the president. (See More Complete Report Below)

TOWARDS A ROYAL RESTORATION ?

“I believe that the adoption of the law not only rectifies a great historic injustice, but provides for moral and historic rehabilitation of your family,” PM Luksic told Prince Nikola Petrovic during a meeting earlier today.

Prince Nikola welcomed the adoption of the law, as he said, not only for the sake of the past, but because of the future as well, as it enables the Royal Family to participate in European processes in Montenegro.

“I am happy with everything that is happening today and I am looking forward to what is to come,” said the Prince.

Is it possible that Europe will have its 11th monarchy soon? Or is it all homage paying to a country’s former royal family?

That is what many royal watchers are wondering as they watch Crown Prince Nikola II Petrovic accept a law late last month rehabilitating his family after they were deposed in 1918.

The Royal House Law allows the House of Petrovic-Njegos to participate in events in Montenegro – which was formerly part of Yugoslavia – and for Nikola to receive a salary of $6.13 million, which is similar to that of a European president. The government is financing €4.3 million euros for the upkeeping of the family and their apartment in Podgorica and a family house in Cetinje.

“I am happy with everything that is happening today and I am looking forward to what is to come,” said the Prince during a reception hosted by Prime Minister Igor Luksic.

Evenso, Petrovic’s attorney in Montenegro, Tania Turquin Spicanovic, said the prince does not expect Montenegro to restore the monarchy, and only wants to see the new law “consistently applied.”

The law also recognizes the royal house’s role in Montenegro history and how it was “violenty annexed” by Serbia nearly 100 years ago.

Yet in many ways, it does look like Montenegro is headed towards restoring its monarchy. All it needs to do is hold a coronation ceremony for Prince Nikola. But there is no word of that happening in the near or distant future.

Montenegro is not the only country where there are talks of having a monarchy once again .Earlier this year, two-thirds of Serbians surveyed that they would like to see their country become a kingdom. Already, its former royal family lives in Serbia and occasionally do public engagements. Same goes for the former royals of Romania, although no poll has shown a majority want a monarchy again.

The Royal House of Montenegro and Njegoskij’s Fund

About the Kingdom of Montenegro:

The small Adriatic nation of Montenegro was ruled by Prince-Bishops until Danilo I became Prince. His heir, from 1910 to 1918 was elevated to the status of King of Montenegro. After World War I the country was handed over to the Serbs as part of the creation of Yugoslavia. King Nicholas I was a poet-monarch and had 12 children who lived very eventful lives even after the loss of their own monarchy. One daughter married the famous WW1 Russian commander Grand Duke Nicholas Romanov and another married King Victor Emanuel III of Italy. Although they have claimed the royal rights no native Montenegrin monarch has reigned since Nicholas I.

About the Prince Nikola II:

Prince Nikola II is the only son and heir of the late Prince Michael of Montenegro, Grand-Duke of Grahovo and Zeta, who lived in exile under a “regency“(born on 1 September O.S., 1908 and regarded by Montenegro’s monarchists asking from 7 March 1921 until his death in 1986, and Geneviève Prigent (1919-1991). (Nikola’s parents married on 27 January 1941 and divorced in Paris, France on 11 August 1949).

Nikola was an active participant in the campaign for the restoration of Montenegro’s independence, preceding the referendum on the separation of the former kingdom from the provisional State Union of Serbia and Montenegro.

Prince Nikola made public pronouncements of his willingness to return to the Montenegrin throne if that were the wish of the people. In July 2010 the government of Montenegro made a formal offer to provide Nikola with a €3,000 monthly stipend (equal to that ofthe President), granting his family with an annual €300,000 civil list, a formal residence in Cetinje and the return of the Petrović Njegoš historic family home in Njeguši. This offer was rejected because Nikola believed that the proposal did not deal adequately with the issue of property compensation, as more than thirty properties were alleged to have been confiscated from the dynasty after the monarchy was overthrown. Furthermore, he believed that the bill would prevent the dynasty from participating in political life and restrict the ability of members of the dynasty to speak freely about certain subjects. He also said that the civil list amount that was announced inthe press was not actually contained in the proposed version of the bill that he was shown.

Owing to his stance on this bill, Nikola chose not to attend the celebrations of the centenary of the Kingdom of Montenegro that were held on 28 August 2010. Instead he celebrated in private. However On the 12 July 2011 the Parliament of Montenegro adopted the Law on the Status of the Descendants of the Petrović Njegoš Dynasty. (More Here)

ROYAL FORUM:Crown Prince of Serbia Seeks to Restore The Monarchy

ROYAL FORUM:Explaining the Concept of a Constitutional Monarchy to a Staunch Republican

ROYAL FORUM:The Pain in the Reign in Spain

ROYAL FORUM:Prince Charles and Camilla’s Car has been attacked by protesters

ROYAL FORUM:Crown Prince of Serbia Seeks to Restore The Monarchy

ROYAL FORUM:Behind the Scenes of Queen Elizabeth II’s Coronation in 1953