Behrooz and Eraj “will not marry” 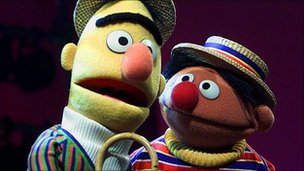 The makers of Sesame
Street say characters Bert and Ernie will not marry in a same-sex
ceremony despite an online petition calling for the union.

Campaigners say the best friends should marry as a way to encourage tolerance of gay people.

A statement from the show’s makers said: “They remain puppets and do not have a sexual orientation.”

The confirmed bachelors have lived together for 40 years and sleep in the same bedroom, albeit in single beds.

“Bert and Ernie are best friends,” the statement from Sesame
Workshop added. “They were created to teach preschoolers that people can
be good friends with those who are very different from themselves.

The online petition states:  “Let us teach tolerance of those that are different.”

Beloved characters include Elmo, the Cookie Monster and Big Bird and it is still watched in more than 140 countries and averages 120 million viewers worldwide.