A new beginning for Palestinians? 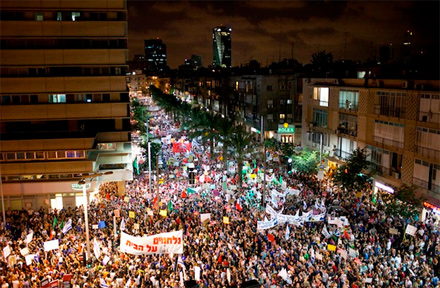 In July I wrote an article that was published in under “One State Solution“.  In it I had proposed that  instead of rockets and terrorism or calling jews “zionists” a new mass movement in Israel in connection with the people of West Bank, Gaza and the arabs in Israel will help advance the palestinian struggles for independence, statehood and freedom.

Now it seems after 25 years of relative silence such a mass movement has begun in Israel by university students, youth group activists, young parents pushing strollers and grandparents. “They say residents of the krayot [the Haifa Bay suburbs] are lethargic, but the bears are waking up from their hibernation,” (Haaretz 8/12/11)

On both sides of the divide people of working and middle classes most of them youth have begun challenging the harsh Israeli regime’s economic and political policies which has revealed its true nature by giving more of the occupied Palestinian land to new settlers “for free” while the residents of Tel Aviv and Southern israel, not to mention Arabs of East Jerusalem, are without homes as the prices to buy or to rent are going beyond their reach.

In the meantime Palestinians in Gaza, West Bank and throughout Diaspora are planning to press for recognition by the UN of their independent state in September.  An inter-merging of these two movements has the potential of a real change in the dynamics of the long standing Arab/Israeli conflicts and politics.

The “Arab awakening” has indeed taken a global character as we are witnessing revolutions, protests and riots all over the Middle East, Africa, Europe and even possibly in the United States.

The roots of these protests are in the economic policies of a system which favors one class, gender, or race at the determine of another, something philosophers have called “exploitation of man by man!” As “the rich gets richer and the poor gets poorer,” the governments are more concerned about supporting and bailing out corporations and banks than helping out the poor, the homeless and the unemployed.

The hight of hypocrisy is achieved by some leaders such as Khamanei in Iran whom while lauding the “Islamic awakening” in some Arab countries and supporting protests in the west (Khamanei’s regime had just called the UK ambassador in Tehran to advise him that Uk government should listen to the demands of its protesters and avoid using harsh methods against them!)  They kill, imprison and suppers their own people at home.

Just as for the west oil and strategic location is a more important reason to consider intervening in a country than famine and human sufferings, in Iran adhering to their interpretation of Islam and/or pursuing their regional and global “anti west” and “anti zionist” views is the only measurement for supporting or opposing these movements. Therefore, the newly awakened masses know that they can not rely on either the western powers or the autocratic, religion imposed leaders.

These new forms of uprisings of youth using technology as a form of communication actually started in Iran as Green Movement in June of 2009 after the presidential elections in which millions poured to the streets and asked “where is my vote” and shouted “death to the dictator” (meaning Khamanei himself.)  Now that the movement has travelled across the borders and has reached even Europe and the US, it can return to Iran as well in a much stronger and deeper form, both in action and in thinking.

The thought, the theory and philosophy is what most of these uprisings, including the Palestinians and Israelis need to develop the most. Old ideas no longer work.  We need to think new thoughts and new ways of bringing together the aspirations of the palestinians for their own homeland, with those of Israelis for peace.

Israelis are also fighting for affordable housing and employment and Palestinians also need peace and economic development.  Therefore there is not a big divide between the two peoples even though Israeli government keeps adding barriers to divide them (and block Palestinians even access to their farms.)

Just as the Palestinians are fighting for statehood in the UN in September, so should they fight for free elections within the occupied territories of both Gaza and the west bank and elect a new generation of leaders who are committed to peace, democracy and economic development while supporting and expressing solidarity with the mass uprisings in Israel and the region.

Just as the Israelis are fighting against the economic policies of the Natanyahu government, so must they support these new uprisings in the arab world and the end to the occupation of Palestine.