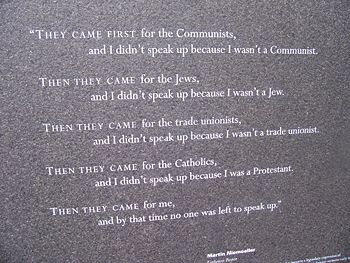 In the past 32 years, the vf regime has been brutally repressing ALL opposition groups from democrats (Jebhe Melli, NAMIR, Iran Liberal Party), to socialists, feminists, monarchists, ethnic parties, PMOI, and the like. The vf regime wants to weaken any and all of us.

I do not know what the folks in the U.S. government are thinking. I hope that they will make the right decision. Decisions have long-term consequences. A bad decision by the Eisenhower administration in 1953 caused so much agony and pain, which after 58 years of brutal tyranny still haunts us today. The bad decision on the de-listing will have great blowback for the U.S. for decades to come.

The PMOI was placed on the list in 1997 to reward Khatami and then kept it on the list by President Bush II in order to keep the vf regime happy so that it would not arm the extremist groups in Iraq to kill Americans (the IRI went ahead and armed the terrorists in Iraq who killed Americans). If the Obama administration kept the PMOI on the list, this will be widely understood by the Iranian people as a huge victory for the vf regime.

The bad decision to keep the PMOI on the terrorist list will be a huge victory for the vf regime. In all its dealings with other governments (e.g., EU, U.S., Iraq), the vf regime always demands that these governments declare the PMOI “terrorist,” and to place more restrictions on the PMOI. The VF regime has actually offered $80,000 to a Canadian expert to write that the PMOI is a terrorist. What will be the reaction of the IRI’s Ministry of Intelligence, IRGC, and the Supreme Leader to the news of de-listing? If the U.S. government kept the PMOI on the list, those working in the IRI’s Ministry of Intelligence will celebrate, so will those in the IRGC, as well as the Supreme Leader himself. The notion that Khamenei, the Ministry of Intelligence, and IRGC would want the PMOI to be de-listed is utter non-sense. The vf regime has been willing to pay a very heavy price in order to put more restrictions on the PMOI.

One of the main principles and ethics of our politics is that although we strongly oppose a dissident group which opposes the ruling tyranny, we strongly condemn those who snitch against the dissident group. As part of our political principles and ethics, we will not collaborate with the ruling tyranny against another dissident. We have great hostility for those who collaborate with our tyrannical oppressors.

In the struggle against the Shah’s tyranny, we did not snitch on other opposition groups or help the regime arrest and persecute them. And those few who did, have widely been regarded as utterly disgusting traitors.

Similarly, in the struggle against the vf regime’s tyranny, we did NOT, do NOT, and will NOT snitch on other opposition groups and help the ruling tyranny arrest and persecute them. There is a bright red line: the vf regime and its collaborators are on the one side; and all those who oppose the vf regime are on the other side of the red line.

For example, we may strongly oppose monarchists, but we should never ever help the vf regime arrest, torture, execute, or assassinate him or her. Same with all other opposition groups.

And in the unenviable “no man’s land” are the reformists and the Melli Mazhabis. The reformists have been part of the nezam and the Melli-Mazhabis have been close to it, but the Supreme Leader in his infinite basirat [insight], wants them [khavas bi-basirat] out of any power.

If we want democracy, we have to defend the civil liberties and political rights of those with whom we disagree. Democracy rests upon pluralism and diversity. We should oppose McCarthyite witch hunts of those the ruling vf regime wants to persecute. In the post-fundamentalist Iran, all the opposition groups have to live in our beloved Iran. All of us, whether democrats (e.g., JM, NAMIR, Iran Liberal Party), monarchists, socialists, ethnic parties (e.g., Democratic Party of Iranian Kurdistan, Komele), Melli-Mazhabis, PMOI … have to learn to co-exist in a plural polity.

Although we disagree with other opposition groups and we express our criticisms, we should:

1. DEFEND THE RIGHTS OF OTHER OPPOSITION GROUPS; and

2. CONDEMN anyone who collaborates with the vf regime.

By keeping the PMOI on the list, the U.S. government will help the vf regime and will certainly demoralize the opposition to the fundamentalist regime. By de-listing the PMOI, the U.S. government will create the conditions that we Iranians ourselves could then take steps towards the planing of the seeds of pluralism, tolerance, and democracy for the post-fundamentalist Iran.

Lets hope the Obama administration would make the right decision.