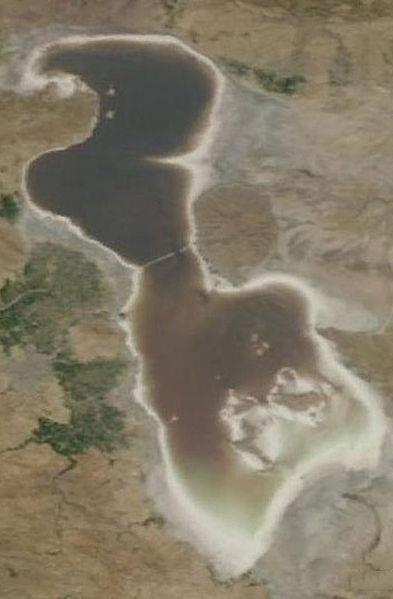 Iran’s parliament refused to allocate money to Save Urmia Lake

Lake Urmia situated between East and West Azerbaijan provinces in Iran. It is:

• THE LARGEST lake in the Middle East

• THE SECOND LARGEST salt water lake in the world

• The biggest natural ARTEMIA habitats in the world.

• Registered under the convention on wetlands of international importance as waterfowl habitat (the Ramsar convention of the UN No. 14583 adopted in 1975)

• THE LAKE IS HABITAT TO VERY RICH FLORA AND FAUNA

• More than 211 species of birds such as flamingos, pelicans, spoonbills, and gulls, 41 species of reptiles, 7 species of amphibians, and 27 species of mammals such as yellow deer inhabit the lake.

• The lake is marked by more than one hundred small rocky islands, which are stopover points in the migration of various birds. Flamingos are known to breed in large numbers at Lake Urmia as many as 25,000 breeding pairs.

• Artemia is a unique type of shrimp living in saline lakes. Covered by a nearly impenetrable skin and able to pump out excess of salt, brine shrimp can tolerate the widest salinity range of any other multicellular organism. The presence of Artemia in the Lake Urmia was first reported in 1899 by Gunther.

International organizations, environmental groups, and the Iranian government should take immediate actions to fulfill their commitments to preserve Lake Urmia.

A swift joint action plan should be prepared and implemented to increase the inflow of water into the lake. The action plan should include both short-term and long-term objectives. The main SOLUTIONS for the recovery of the lake are:

a) Release water behind dams;

An awareness and better understanding of the lake by the surrounding human population will provide a foundation for future sustainable management of this remarkable inland lake.

• Euro news: Urmia Lake in northwestern Iran is drying up. One of the biggest saltwater lakes in the world and a registered UNESCO reserve, it is home to hundreds of species of birds, reptiles and mammals.

• But experts say a combination of drought and the construction of dams on rivers feeding the lake have contributed to it drying up.

• Associated Press= OROUMIEH LAKE, Iran (AP) — From a hillside, Kamal Saadat looked forlornly at hundreds of potential customers, knowing he could not take them for trips in his boat to enjoy a spring weekend on picturesque Oroumieh Lake, the third largest saltwater lake on earth.

• “Look, the boat is stuck… It cannot move anymore,” said Saadat, gesturing to where it lay encased by solidifying salt and lamenting that he could not understand why the lake was fading away.

• The long popular lake, home to migrating flamingos, pelicans and gulls, has shrunken by 60 percent and could disappear entirely in just a few years; experts say — drained by drought, misguided irrigation policies, development and the damming of rivers that feed it.

• Until two years ago, Saadat supplemented his income from almond- and grape-growing by taking tourists on boat tours. But as the lake receded and its salinity rose, he found he had to stop the boat every 10 minutes to unfoul the propeller — and finally, he had to give up this second job that he’d used to support a five-member family.

• “The visitors were not enjoying such a boring trip,” he said, noting they had to cross hundreds of meters of salty lakebed just to reach the boat from the wharf.

• Other boatmen, too, have parked their vessels by their houses, where they stand as sad reminders of the deep-water days. And the lake’s ebbing affects an ever-widening circle.

• In April, authorities stopped activities at the nearby jetty in Golmankhaneh harbor, due to lack of water in the lake, now only two meters deep at its deepest. Jetties in Sharafkhaneh and Eslami harbors faced the same fate.

• The receding water has also weakened hotel business and tourism activities in the area, and planned hotel projects remain idle since investors are reluctant to continue.

• Beyond tourism, the salt-saturated lake threatens agriculture nearby in northwest Iran, as storms sometimes carry the salt far afield. Many farmers worry about the future of their lands, which for centuries have been famous for apples, grapes, walnuts, almonds, onions, potatoes, as well as aromatic herbal drinks, candies and tasty sweet pastes.

• “The salty winds not only will affect surrounding areas but also can damage farming in remote areas,” said Masoud Mohammadian, an agriculture official in the eastern part of the lake, some 370 miles (600 kilometers) northwest of the capital Tehran.

• Other officials echoed the dire forecast.

• Salman Zaker, a parliament member for Oroumieh warned last month that, “with the current trend, the risk of a salt tsunami is increasing.” Warning that the lake would dry out within three to five years — an assessment agreed to by the local environment department director, Hasan Abbasnejad — Zaker said eight to 10 billion tons of salt would jeopardize life for millions of people.

• Masoud Pezeshkian, another lawmaker and representative for city of Tabriz in the eastern part of the lake said, “The lake has been drying but neither government nor local officials took any step, so far.”

• How did this disaster develop, and what can be done now?

• Official reports blame the drying mainly on a decade-long drought, and peripherally on consumption of water of the feeding rivers for farming. They put 5 percent of the blame on construction of dams and 3 percent on other factors. Others disagree about the relative blame.

• The first alarm over the lake’s shrinking came in late 1990s amid a nagging drought.

• Nonetheless, the government continued construction of 35 dams on the rivers which feed the lake; 10 more dams are on the drawing boards for the next few years.

• Also completed was a lake-crossing roadway between Oroumieh and Tabriz, cities on the west and east of the lake. No environmental feasibility study was done in the planning for the road, and environmentalists believe the project worsened the lake’s health by acting as a barrier to water circulation.

• Nasser Agh, who teaches at Tabriz Sahand University, suggested miscalculations led to late reaction to save the lake. “Experts believed it would be a 10-year rotating drought, at first,” he said. But long afterward, the drought still persists, with devastating effects.

• In the early 2000s, academic research concluded that the lake could face the same destiny as the Aral Sea in Kazakhstan and Uzbekistan, which has been steadily shrinking since rivers that feed it were diverted by Soviet Union irrigation projects in 1960s. It is now less than one-tenth of its original size.

• In April, the Iranian government announced a three-prong effort to save the lake: a cloud-seeding program to increase rainfall in the area, a lowering of water consumption by irrigation systems, and supplying the lake with remote sources of water.

• Some experts termed the weather control portion of the program as only a “symbolic action” by government, saying the best answer would be to release more water currently being held back by dams. The evaporation rate has been three times the rainfall rate, making the rivers’ historic role vital to sustaining the lake.

• “The lake is in such a misery because of the dams,” Ismail Kahram, a professor in Tehran Azad University and a prominent environmentalist, told The Associated Press. Three-fifths of the lake has dried up and salt saturation has reached some 350 milligrams per liter from 80 milligrams in 1970s, he said.

• Kahram said the government should allow 20 percent of the water from the dams to reach the lake.

• Mostafa Ghanbari, secretary of the Society for Savior of the Lake Oroumieh, believes transferring water from the Caspian Sea may be “the only way to save” the lake. But such a project would be ambitious, requiring the pumping of water some 430 miles (700 kilometers), from a body of water at considerably lower elevation.

• In the green and beautiful city of Oroumieh, famous for peaceful coexistence between Azeri people, Kurds, Armenians, Assyrians as well as Muslims and Christians, talk about the fate of the lake is common among ordinary people in teahouses and on the streets.

• Many express happiness with the government decision to manipulate clouds in hopes of increasing rainfall.

• “It is a good decision. Every evening I look at the dark clouds that are coming and I tell my family soon there will be rain,” and on some nights there have been showers, said Masoud Ranjbar, a taxi driver.

• However, Eskandar Khanjari, a local journalist in Oroumieh, called the cloud-seeding plan “a show.” He said recent rainfall was only seasonal, as predicted by meteorologists.

• Scoffing at the promises of officials and what he called “non-expert views,” he said of efforts to save the lake: “It seems that people have only one way; to pray for rain.”

• Beyond the debates by national and local authorities some folks here suggest another way Oroumieh could be saved.

• A local legend says wild purple gladiolas have had a miraculous role in doing just that. The flowers have grown every year for a thousand years in the spot where a princess of Oroumieh was killed as she warned the people of the city about an invading enemy.

• As a recent sunset turned the lake golden, Kamal the boatman tried to find some hope in the returning blossoms.

• “You see, still wild purple gladiolas are appearing in the spring,” he said. “The city and its lake can eventually survive.”