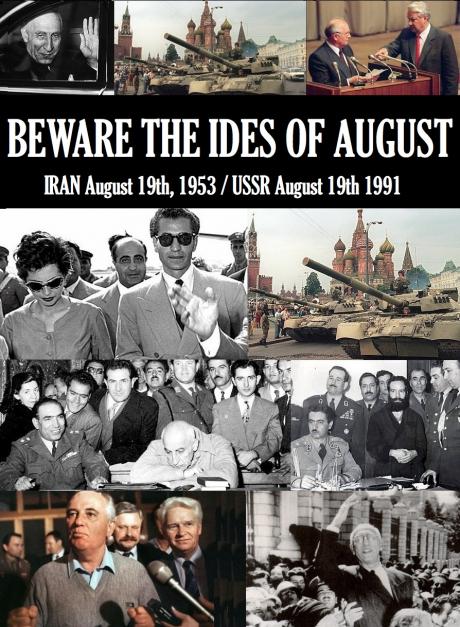 The Month of August seems to be a month ripe for turning the tables in the political status quo. Strange, ironic and haunting both Iran in 1953 and the USSR in 1991 faced a similar twist on the very same day of August 19th, exactly 38 years apart, which sealed the fates of all involved.

Gorbatchev Returns to Moscow After Coup:

Shah of Iran Returns after Coup:

BEWARE THE IDES OF AUGUST

PArvizRajji, Abbas Milani and Mashallah Ajoudani Speak about the events of 53

The Cat and the Coup:

Description: The Cat and the Coup is adocumentary game in which you play the cat of Dr. Mohammed Mossadegh, the “first democratically” elected Prime Minister of Iran. During the summer of 1953, the CIA engineered a coup to bring about his downfall. As a player, you coax Mossadegh back through significant events of his life by knocking objects off of shelves, scattering his papers, jumping on his lap and scratching him.

IN THE SUMMER TIME

Mungo Jerry – In the Summer Time:

Joe Cuckor – Summer in the City;

BEWARE THE IDES OF MARCH

Beware the Ides of March:

Soviet President Mikhail Gorbachev has been overthrown after a coup by Communist hardliners.

Mr Gorbachev is reported to be under house arrest at his holiday home in the Crimea.

News of the coup was broken in an announcement on state radio earlier on Monday.

It said Mr Gorbachev was “unable to perform his presidential duty for health reasons”.

Soviet television has since been broadcasting regular condemnations of Mr Gorbachev’s policies.

The new leaders, headed by former vice-president Gennady Yanayev have declared a state of emergency.

Ina televised broadcast, the eight coup plotters, who include the heads of the army, the KGB and the police, said they were saving the country from a”national catastrophe”.

Tanks are now patrolling the streets of Moscow but in spite of their presence thousands of people have come out to demonstrate against the takeover.

They included the president of the Russian Federation, Boris Yeltsin.

Mr Yeltsin climbed on to a tank outside the Russian parliament building to confront the troops and appeal to the army not to turn against the people.

He said the coup was a “new reign of terror” and called for civil resistance.

Despite a ban on demonstrations, several hundred demonstrators gathered outside the Kremlin calling for the reinstatement of the legal government.

Nearby troops made no move to break up the demonstration but the army is reported tohave warned hospitals to be ready for “casualties”.

US President George Bush has called the coup a “disturbing development”and cut short his holiday to return to the White House.

The 1953 Iranian coup d’état (known in Iran as the 28 Mordad coup) was the overthrow of the democratically elected government of Iranian Prime Minister Mohammad Mosaddegh on 19 August 1953, orchestrated by the intelligence agencies of the United Kingdom and the United States under the name TPAJAX Project.The coup saw the transition of Mohammad-Rezā Shāh Pahlavi from a constitutional monarch to an authoritarian one who relied heavily on United States support to hold on to power until his own overthrow in February 1979.

In 1951, Iran’s oilindustry was nationalized with near-unanimous support of Iran’s parliament in a bill introduced by Mossadegh who led the nationalist parliamentarian faction. Iran’s oil had been controlled by the British-owned Anglo-IranianOil Company (AIOC). Popular discontent with the AIOC began in the late 1940s, a large segment of Iran’s public and a number of politicians saw thecompany as exploitative and a vestige of British imperialism. Despite Mosaddegh’spopular support, Britain was unwilling to negotiate its single most valuable foreign asset, and instigated a worldwide boycott of Iranian oil to pressureIran economically. Initially, Britain mobilized its military to seize control of the Abadan oil refinery, the world’s largest, but Prime Minister Clement Attlee opted instead to tighten the economic boycott while using Iranian agents to undermine Mosaddegh’s government.  Witha change to more conservative governments in both Britain and the United States, Churchill and the U.S. Eisenhower administration decided to overthrow Iran’s government though the predecessor U.S. Truman administration had opposed a coup.

Britain and the U.S.selected Fazlollah Zahedi to be the prime minister of a military government that was to replace Mosaddegh’s government. Subsequently, a royal decree dismissing Mosaddegh andappointing Zahedi was drawn up by the coup plotters and signed by the Shah. The Central Intelligence Agency had successfully pressured the “weak” monarch to participate in the coup, while bribing street thugs, clergy, politicians and Iranian army officers to take part in a propaganda campaign against Mosaddegh and his government. At first, the coupappeared to be a failure when on the night of 15–16 August, Imperial GuardColonel Nematollah Nassiri was arrested while attempting to arrest Mosaddegh. The Shah fled the country the next day. On 19 August, a pro-Shah mob, paid by the CIA,marched on Mosaddegh’s residence. According to the CIA’s declassified documents and records,some of the most feared mobsters in Tehran were hired by theCIA to stage pro-Shah riots on the 19th. Other CIA-paid men were brought into Tehran in buses and trucks, and took over the streets of the city.800 people were killed during and as a direct result of the conflict.Mosaddegh was arrested, tried and convicted of treason by the Shah’s military court. On 21December 1953, he was sentenced to three years in jail, then placed under house arrest for the remainder of his life.Mosaddegh’s supporters were rounded up, imprisoned, tortured or executed.

After the coup, Pahlavi ruled as an authoritarian monarch forthe next 26 years, until he was overthrown in a popular revolt in 1979.Thetangible benefits the United States reaped from overthrowing Iran’s elected government included a share of Iran’s oil wealth as well as resolute prevention of the slim possibility that the Iranian government might alignitself with the Soviet Union, although the latter motivation producescontroversy among historians. Washington continually supplied arms to the unpopular Shah, and the CIA-trained SAVAK,his repressive secret police force. The coup is widely believed to have significantly contributed to anti-American sentiment in Iran and the MiddleEast. The 1979 Iranian Revolution deposed the Shah and replaced the pro-Western royaldictatorship with the largely anti-Western Islamic Republic of Iran.

Simon Schama on the importance of understanding the past

Shahrnush Parsipur: “I was Never Physically Tortured by the SAVAK”