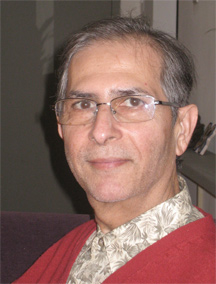 Born into a notable and learned family (Aryanpour from his mother’s side and Mashayakhi from the father’s side), Mehrdad came to the United States in 1972 and received his PhD from American University in Washington, D.C. at a very young age. Mehrdad has been teaching sociology at different institutions in the Washington area, (among them at Georgetown University) for nearly three decades and has been a mentor to many students, Iranian Americans as well as Americans.

Mehrdad has also been politically active for as long as we know him. He joined the student movement prior to the Revolution and is a founding member of the Jomhorukhahan Party (Iranians for a Secular Democracy).

His written work combines scholarship with activism. In 1992,  he co-edited a book with the late Samih Farsoun called, Political Culture in the Islamic Republic, published by Routledge.   He has written dozens of articles for various Iranian journals, inside and outside Iran. In the past two years, he has published two books on democracy, republicanism and the Green Movement in Iran.

Unfortunately, Mehrdad was diagnosed with pancreatic cancer over a year ago. Yet his illness has not kept him from following Iranian politics or deterred him from actively participating in seminars and conferences.  While coping with his cancer, he continues to be a regular guest on the Persian service of VOA. His stamina is amazing and he is a true lover of life.  We can all learn a lesson or two from him, about the beauty and preciousness of life, and how to persevere in the face of adversity.