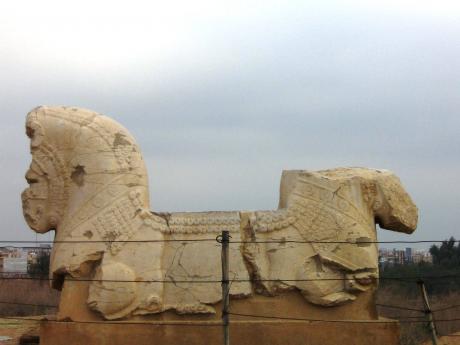 Shush in Khuzistan is one of the most interesting places in Iran as it spans the history of the region from ancient Elam to contemporary Iran. A great deal has been written about the Zigorat, built around 640 BC. So I will not bore you with what is already out there; I will just say this that I have read that according to some people the word Khuzistan comes from Khuz which relates the land to Cushites. I could not confirm that anywhere else as there were other explanations, but it was interesting to note that the original inhabitants of Khuzistan might have been Africans or people related to Africa. I could not take good pictures as it was pouring the whole time we were there.

There was also the tomb of Danielle, the prophet and the remnants of Apadana Palace built by Dariush. I had always wanted to see the tomb which was very close to the river bank; I noticed some Jewish people praying in the yard.

Apadana was the one that shocked me: I did not know of its existence (though I cannot really say it was actually there, just remnants of columns and statues and a sense of a the layout of the building). It had great resemblance, to my untrained eye, to Takhte Jamshid close to Shiraz.

And right across from Apadana, moving to the Ghajar era, there was an interesting palace built in European style.

Shush is a very beautiful city with kind people and very nice kolucheh with fresh dates inside. I got them hot from the bakery as they came out of a traditional oven. They were wonderful. If you are around, try them!

PrevPreviousIran suspected in hack of web security firm
NextIs it right to shut up this jerk?Next