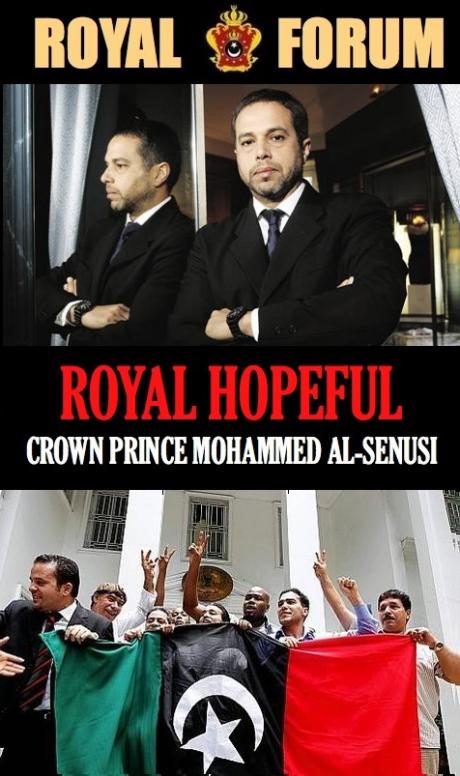 The great-nephew of the Libyan king ousted by Muammar Gaddafi said on Wednesday his countrymen should be allowed to decide if they want the return of the monarchy, offering his family as a “servant of the Libyan people.” In an Interview in Rome to the Associated Press, the Prince insisted that the Libyan people should have the right to chose what form of democratic government they want –including having a royal head of state. (Related News)

Interview with Prof. Rosemary Hollis of the CityUniversity of London

Libya is reliant on foreign help, says Dr Mahmoud Jebril, of the Libyan National Transition Council, butthe country does not want to see foreign tropps on it’s soil he warns. DrJebril also maintained that the transition council want the international community to continue to engage, and do business wit Libya saying that they would make every effort to ensure that trade vital to Europe, such as oil production,would be maintained.

The great-nephew of the Libyan king ousted by Muammar Gaddafi said on Wednesday his countrymen should be allowed to decide if they want the return of the monarchy, offering his family as a “servant of the Libyan people.”

Leaders of the rebels who ended Gaddafi’s 42-year-long dictatorship have said they don’t envision an institutional role for Prince Mohammed el Hasan el Rida el Senussi or his family, but that isn’t discouraging the prince.

Just 7 years old when Gaddafi ousted then-King Idris in a 1969 coup, the prince insisted to The Associated Press during an interview in Rome that the Libyan people should chose what form of democratic government they want –including having a royal head of state.

“We have to give a chance to this 6 million people to choose what they want,” he said, though he declined to say where there should be a referendum. “I’ll respect any other choice and we have to respect what Libyan people choose, the monarchy or republic.”

What matters, he said, is “to make sure we have democracy, we have freedom of choice.”

The prince, whose grandfather was a younger sibling of the childless king, said he came to Rome from his home in London to meet with economic leaders and political figures both from Italy’s government and opposition, to keep the world’s attention on Libya’s future.

The prince was working, he said, to ensure that “the future of Libya will be bright, and when I say bright I mean a country with a constitution,with health care system, with freedom of speech and also justice.”

The soft-spoken prince recalled how his late father was arrested and his family’s house burned to the ground as the Gadhafi regime moved to purge the royals. Eventually, his father, who had been crown prince in Tripoli, was granted house arrest and the family moved to Britain in the late 1980s.

But he said he didn’t want to “compare our problems” with the suffering of Libyans under Gadhafi, especially in the last few months as the dictator tried to crush the rebellion.