The Iranian art of lying 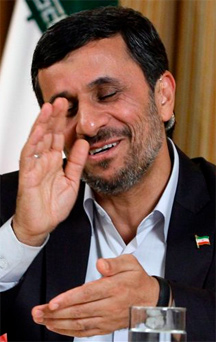 A friend was enthusiastically recounting his run-in with a police officer in a Los Angles freeway. It turns out that my friend was doing 90 in a 55-mile-an-hour zone in his brand new BMW with the wife by his side and mother-in-law in the backseat. It’s not often that you get a chance to do 90 on LA’s freeways. So, my friend figured, what the heck, what’s the worst that can happen?

Just when he is ready to push his Beemer to the limit, he spots flashing lights in his rear-view mirror and immediately revises a plan to get out of the ticket. While slowing down and pulling over to the side, he tells the mother- in-law to fake a heart attack. Following his lead, the wife slides to the backseat and the mother-in-law starts playing the part. My friend quickly messes up his hair, lights up a cigarette and clears his throat.

The stage is set for Persian bullshitting theatricals.

The police officer slowly approaches the car and looks inside. The mother-in-law presses on her chest and takes a deep breath. The wife rubs her mother’s legs and says in broken English, “please don’t die. We are almost there at the hospital.”

Intimidated by the presence of the police officer, the mother-in-law is close to having a real heart attack in the backseat.

“Excuse me officer,” my friend said, “my mother-in-law in the back has a bad heart and she is having a stroke. I was driving very-very fast to get her to the emergency room. That’s why I’m smoking a cigarette. I’m very-very stressed.“

The police officer sticks his head inside the car and glances at the ladies in the back. The mother-in-law makes a chocking sound and closes her eyes. The police officer immediately steps back and waves at my friend to proceed. Knowing that he has gotten away with getting another ticket, my friend steps on the gas and takes off like a bat out of hell with a smile that goes from ear to ear. Score!!!

Now let’s go from LA to NY. President Ahmadinejad made his annual pilgrimage to the United Nations for a few days of fun, festivities and shopping. He spoke to rows of empty chairs while displaying his divine luminosity. As he roamed from one meeting to another and from one interview to the next, he showcased his God-given talent of bullshitting, which happens to be the most important asset in most Iranians’ arsenal. And of course, yet again, we witness his interviews with American networks and softball questions followed by Ahmadi’s skillful answers — more BS, and like a bad nightmare, it just goes on and on.

I personally believe Ahmadinejad has mastered the art of Persian bullshiting theatricals. He represents the very persona of many of us inside and outside of the country. He is real. Like many of us, he lies without hesitation and in most situations, he actually believes his own lies. Ahmadi gets us. He understands that most of us take our cues from a defeated culture, which has adopted lying as a mean of survival. he looks you in the eyes and says it like it is NOT! Like my friend in LA, he understands that Westerners in most cases give you the benefit of the doubt, and that by itself creates great opportunities for bullshit followed by a grin and a sense of accomplishment.

Another good example is the public hanging of a 17-year-old that took place a few days ago in Karaj, west of Tehran. The prosecutor was asked about the legalities of executing a minor. He responded that the kid was really 18, if you use a different calendar and consider the way stars and moons line up. I was waiting for him to mention that based on the Mayan calendar the kid was already dead, so what’s the big deal (bullshit + grin + sense of accomplishment).

Throughout our history, we Iranians have always been great liars. That includes making up stories about the Persian Empire, Islam, dynasties, left, right and everything in between. Lying is a big part of our dogma that has practically ruined our lives and our country. We have built our culture, religion and history based on wacky lies and self-fulfilling prophecies. For many of us the line between truth and bullshit has become so blurry that we simply can’t tell the difference anymore. We talk about democracy and human rights as if our problems can just magically disappear. We fail to recognize that our plight, our shortcomings have nothing to do with the lack of freedom and democracy. The problem is our sick culture of lying and deception.

Now, don’t get me wrong. Not all Iranians are reality-challenged. I personally know many who are admirably honest. But most have crawled under a rock and have distanced themselves from their own kind.