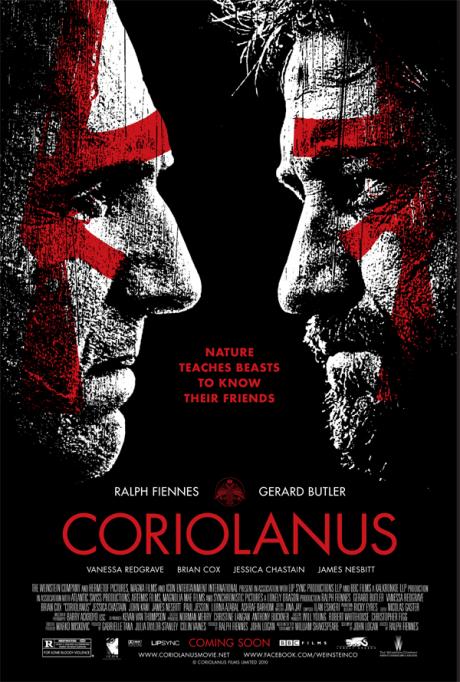 A banished hero of Rome allies with a sworn enemy to take his revenge on the city. Shakespeare’s play transposed to Belgrad amidst the Serbo-Croatian War.

The citizens of Rome are hungry. Coriolanus,the hero of Rome, a great soldier and a man of inflexible self-belief despises the people. His extreme views ignite a mass riot. Rome is bloody. Manipulated and out-maneuvered by politicians and even his own mother Volumnia, Coriolanusis banished from Rome. He offers his life or his services to his sworn enemy Tullus Aufidius. Coriolanus and Aufidius march on Rome intending to destroy the city.

Ralph Fiennes and Vanessa Redgrave Behind the Camera :

Ralph Fiennes chats with Tribute at TIFF 2011 about his directorial debut,”Coriolanus.”

Brian Cox of ‘Coriolanus’ at the Toronto Film Festival 2011:

Ralph Fiennes of ‘Coriolanus’ at the Toronto Film Festival 2011

Ralph Fiennes has picked a modern war-zone version of Coriolanus for his directorial debut. Cath Clarke is embedded on setin Belgrade – bullets, bandanas, Gerard Butler and all

A dozen or so soldiers are sprawled in front of a communist-era block of flats in a factory town outside the Serbian capital, Belgrade. The building has seen better days, graffiti snaking the walls, brickwork crumbling. The soldiers are none too pretty, either: a mean-looking hairy crew in dirty uniforms. Up marches their general and grunts at them. Behind the general’s bushy beard and mirrored sunglasses is the actor Gerard Butler, and the soldiers are extras playing his troops. As he stomps off, grinning, to start the day’s filming in a nearby flat, one of them pulls out a sudoku book. Not so tough after all – but film sets, like wars, involve a lot of waiting around.

This is weeks even of eight on Ralph Fiennes‘s directorial debut, a contemporary adaptation of Shakespeare’s Coriolanus,to be released next year. Fiennes is also playing the flawed Roman military hero, a one-man war machine, surplus to peace time needs and hated by the people. Gerard Butler has been cast as Coriolanus’s nemesis Aufidius, the general of the Volsci people. The town is standing in for a Volscian city under attack, and it’s the crew’s second visit. Last time they stayed four days,staging running battles in the streets, setting cars and sofas ablaze, and even exploding a bus. They’re back to shoot scenes with Butler, who hasn’t been available till now.

It feels slightly unreal. A second unit is picking up extra skirmish footage. A burly stunt guy shouts up to a soldier/extra who is coming under fire on a balcony: “More energy, mate. You’ve just been smashed in the chest.” An old woman who lives in the flat next door has come out to watch. Locals here are soused to the noise, they don’t so much as flinch at the gunfire.

Fiennes and Butler emerge at lunchtime, with the crew of 100 or so, to eat in a marquee at the edge of town next to a shabby fair ground. They’re at the top table withSerbia’s interior minister, who has brought his family for a day out to watch filming. Butler is on entertainment detail, posing for photos with the kids.Next to him, Fiennes is on his feet, taking stock of his troops. Shaven-headed,wearing a creaseless grey T-shirt, blue jeans and unscuffed trainers, he could pass for off-duty military. It’s the posture – at ease, but ready to handle aspot of bother.

Choosing Shakespeare for your directorial debut – and a challenging Shakespeare to boot– might seem wilfully thespy coming from Fiennes. He jokes himself about some of the responses he got from financiers at Cannes last year: “You say ‘Shakespeare film’ and see the look of panic in their eyes.” He must have hated all that making-nice with the suits. “I sort of gritted my teeth.”

He says he had the idea of filming Coriolanus when he played the role on stage in 2000. In the last few years, it has turned into an obsession. Stripped of the more difficultpassages, what’s left is a visceral tragedy that lends itself to cinema. “It doesn’t take any prisoners,” he says. “It has no lyricism. Ilike that.” Fiennes did a lot of the early leg work before he had any financial backing, approaching Gladiator screenwriter John Logan, who wrote the script on spec. The finished product is – to put it crudely – an edit-job, and “a page turner” according to executive producer Colin Vaines.

Coriolanus has been described as Shakespeare’s least sympathetic tragic hero. Banished from Rome, he turns renegade and joins with Aufidius to march on the city. “I kind of like his unlikability,” explains Fiennes. It is his meatiest film role since The Reader, and there was never any question in his mind that he would act as well as direct. He wanted to play Coriolanus again immediately after finishing the stage run. Why? “Because I probably thought I hadn’t fully explored it, fully found it.”

The play hasbeen elastic to political interpretations, left and right, over the years. In Nazi Germany, Coriolanus was a Hitler-like hero, and after the second world warthe occupying Americans banned it. Brecht worked on a Marxist adaptation in the last years of his life. “I do think that it’s a mistake to make apolitical message of it,” Fiennes says.

Still, he adds it’s a play that works today. Since he’s been putting the film together, he has found resonances in wars and protests around the world: Athens, Burma, Somalia,Iraq. Even in Gordon Brown’s microphone embarrassment last week. Fiennes has a scene in the film in which Brian Cox’s smooth political operator censors Coriolanus as he sneers at the people in the senate, placing a hand over his microphone. He based it on a George Bush gaffe at the G8 summit in 2006 when Bush chatted to Tony Blair, not realising his mic was still on. “Then the other day I’m reading the papers and there’s Gordon Brown saying ‘bigot’.”

If what I’ve seen is anything to go by, this film could turn out to be full-metal Shakespeare. “It’s the most macho thing ever,” says another producer Gabrielle Tana, laughing. Fiennes describes his version of Rome as a power state, and the Volscians as an older community struggling to retain autonomy.He mentions parallels: Israel/Palestine, Russia/Chechnya, but is at pains to stress this is backstory, not explicit in the film.

You can easily spot the difference between a Roman and Volscian soldier. The Romans aredressed in high-tech camouflage gear. Most of them are special-forces soldiers on loan from the Serbian government, and while Fiennes insists they’re all “really sweet”, they look granite-hard and not one of them is under 6’5″. The Volscians are more ragtag, with their Che beards, piercings and bandanas. They also have extraordinary tattoos: “Guns and rosaries,”says the makeup guy, pulling out sheets of designs featuring a mix of early Christian symbols and military insignias. He showed me Butler’s tattoos, which is as close as I’m going to get – he’s not talking to journalists.

Fiennes says he scouted all around eastern Europe to find his anywhere/nowhere city. Bucharest was too Ceausescu. he says; he went to Zagreb and Sarajevo, before settling on Belgrade. For scenes set in the Roman senate, they were given permission to shoot in the Serbian parliament for three weekends (that’ll explain the interior minister). In terms of his crew, he has assembled an esteemed bunch.That was critical, he says. “I’ve had my arse saved so many times. When you’re trying to be in it and direct, you’re reliant on the observation and the alertness of other people.” He’s talking in particular about director of photography Barry Ackroyd, whom he met on The Hurt Locker (in which Fiennes briefly appeared as a mercenary). Vaines, who has known Fiennes for 20 years,says the director brings a lot of loyalty with him. “He is uncompromising, people respect him. It’s definitely helped put this together.”

The crew is acheerful half-and-half jumble of Brits and Serbs. Walking to lunch, I had arun-in with a Serbian cameraman: “Get out of the way or you will be shot.” He paused to clarify. “In shot”. The cast is similarly mixed. Not just “a bunch of white, middle-class thespians doing their thing”, according to another producer. So, there is Ashraf Barhom (an Israeli Arab), South African actor John Kani, and Dragan Micanovic heading up the Serbs. Representing the Brits are Brian Cox, playing a rascally political fox, James Nesbitt and Paul Jesson. But the performance everyone on set is talking about is Vanessa Redgrave’s: she plays Volumnia, the mother who raisedCoriolanus as warrior for Rome – more nuanced and less of a battle axe than iscustomary.

And of course there is Butler. Fiennes explains his casting by saying he wanted an actor with physical charisma. Someone the audience would believe as a contender. “People need to think he can win. Is Aufidius going to beat the shit outof Coriolanus?” I’ve seen Butler’s personal trainer (she looks harder thanthe Serbian soldiers), so I could buy it. Butler might have taken a pay cut to make the film, but he’s brought his Hollywood accoutrements with him (there are unsubstantiated rumours of a nutritionist).

After lunch, the pressure is on. There’s a scene to shoot with Butler running battle-weary through the defeated city, stumbling across a Roman atrocity. “If you’re not doing anything, fuck off,” bellows a line producer. Someone from the crew is arranging a dead child with a bullet wound to his head on the ground next to an ambushed car. Inside, a man and woman are slumped in the front seats, and a little girl is strewn across the back. There’s a horrible documentary authenticity to the awkward angles of the limbs. Fiennes is supervising. Butler is out of sight, but you can hear him roaring obscenities to himself, psyching up.

Fiennes yells “action” and runs behind his monitor. Butler staggers into view,stops at the car and begins a long, ferocious speech, vowing revenge on Coriolanus. Behind his monitor Fiennes is rocking, stroking his check, utterly absorbed. Butler fluffs his lines, inserting a few choice expletives – more Paisley than Stratford-upon-Avon. Fiennes hurries things along between takes, concerned for “Gerry’s motivation”.

An hour later, the scene is in the bag. There’s a spontaneous round of applause for Butler, and Fiennes is beaming a 100-watt smile. There is a spot of makeup blood on his pristine grey T-shirt. In the intensity stakes, Fiennes could be auditioning for a serial killer. “Fan-fucking-tastic,” he says, walking away. Butler – if not Shakespeare – would approve.

ROYALTY ON SCREEN : Sean Bean in HBO’s «Game of Thrones»

ROYALTY ON SCREEN: Keira Knightley Pioneer Feminist in “The Duchess”

ROYALTY ON SCREEN: James Purefoy and Paul Giamatti in “Ironclad”