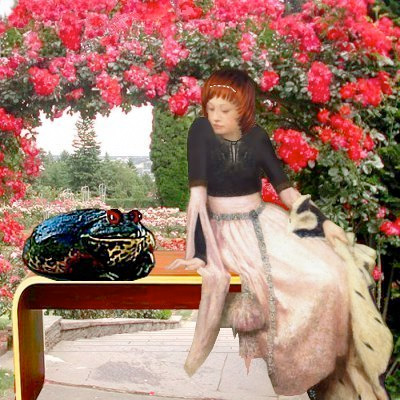 “My dear Princess,” said Mother Simorq, “a huge dreadful-looking frog has stopped at the garden gates, asking permission to enter the Castle. I suppose he is your friend, the Frog-Prince?”

“No matter what his demands, this is a great opportunity for you to welcome your Shadow-Prince,” said Mother Simorq, fixing her reassuring gaze on Nisha. “Nothing but good will come out of this meeting.”

“Make way for the giant frog,” cried the Princess to the guards in a tentative, trembling voice. She then closed the doors of the dining quarters out of returned fear of meeting him.

It did not take long before everyone heard walking steps with a resounding noise, sneaking up the ironwood staircase of the castle, like the rustles of soaked, dead leaves being stomped on. The Princess looked into Mother Simorq’s inquiring eyes and before she had a chance to open her mouth, they heard a booming knock at the dining-room doors followed by the Frog’s deep loud voice.

“Princess, imperfect Princess, open the door for me; I’m the Frog-Prince, your long lost shadow. You promised to form an everlasting bound with me upon taking your soul back; do you remember?”

The Princess’ heart fumbled a beat as she took in the Frog’s tone of voice. Mother Simorq rolled her eyes with discretion, before uttering in a determined breath.

“My dear Lady, your lost shadow has found you at last and wants to bind with you. Why are you overwhelmed by him? Why don’t you open the door?”

“Oh, Mother Simorq, I don’t want to join this ugly creature. You have no idea what a brutal character he has. The least I can tell you about him is his demand to become my husband, and share my bed. I like him, but don’t trust him. I don’t wish to marry him, and find him too much beneath me. He is a contemptible, croaking frog and I am a pink-nailed Princess for God sake.”

“But he makes up a part of you, my dear,” Mother Simorq pointed out. “How do you envision living without your shadow, monstrous as he may be?”

“I wanted my shadow to remain a handsome prince of my age,” said the Princess with a grave face and grumbled, “not an ugly frog! I cannot even touch the creature. It’s my mother’s fault. She turned my shadow into a creature I can hardly touch. And by keeping him separated from me for so long, she caused his character to become, over time, much uglier than his features.”

“But you had neglected him by leaving him alone in the forest. The Queen did her best to keep him alive for your sake, to not hurt you. Now, the burden of your shadow’s fate falls upon yourself. I am not saying you ought to marry him. But if you embrace him with affection, he will turn out to look less threatening. If you put your mind into it, he will become much milder than the way he acts now.

“Easy for you to say, Mother Simorq”, said the Princess in a pensive tone. “Maybe my mother has good reasons to believe any attempt to change savage creatures will utterly fail.”

Mother Simorq remained silent amidst the Frog-Prince’s continual knocks on the doors.

Mother Simorq left the dining quarters to let the Princess deal with her Shadow-Frog in private. The young woman muttered to herself as she whisked down the hall and opened the ornately-carved wooden doors. The bulky Frog jumped in after greeting her, and hopped behind the Princess like an obedient dog on a spring to the foot of her wooden platform. The Princess sat back on the platform with poise, finishing her meal, with her eyes fixed on her plate. The baggy-eyed Frog-Prince, resentful of the Princess’ display of indifference, jumped before her on the platform, knocked over her plate with his slippery fat leg.

“If you give me a kiss,” he said with a fake smile, “I’ll shift back into the human Prince I was. You’ll help me kill the nasty Queen, then we will marry. I’ll become the King of the land and you’ll stay in the Castle as my first wife and supervise our servants. If you bear me male heirs, I’ll make you my Queen, build you a castle of your own and promise to rid of my other wives.”

A flush of rage crept into the Princess’ face, but she tried to camouflage it with a honeyed smile. She slowly came down her platform, approaching the Frog-Prince who now rested on the floor.

“What if we talk first?” she said. “Let’s become more familiar with each other. Let’s have conversations, meaningful dialogues about our future.”

“Fine,“ said the Frog, chuckling while wearing a dour face. “What do you have up your sleeve?”

The Princess flashed a smile that did not reach her eyes, invited him to follow her to the Castle’s rose garden, where they sat on a smooth wooden bench.

“You mean all the qualities for success?” laughed the Smoky Frog with pure malice, before his face grew somewhat serious.

“I suffered in such awful ways without you. I hated your mother, every human being, every living thing more and more as the days passed by. I tortured and ate little birds as they seemed free from all sufferings. I did not care about anyone, but myself. You are right about my being selfish. I can see nothing wrong with that. Regarding brutality or greed, like selfishness, they are what define me. Do you have a problem with that?”

“Not as long as I know of their source. If that can help me understand how they made you darker or bigger than any other frog I have seen.”

“What else do you want to know about me, imperfect Princess?”

“Ok, let me mull over it,“ said Nisha as she rubbed her forehead. “I want to know what you need to tell me, what gift you have brought for me. In truth, I want to be you sometimes. I want to see everything entirely from your perspective: the depth of the lake, the world of water creatures, how to torture innocent little birds without any compassion, or how you perceive my mother and me. I want to allow myself to admit my role in your alterations, to discover possible similarities between us, to learn to accept you for who you are.”

The Frog-Prince wore a satisfied smile, shook his head in agreement, and reached for Nisha’s hand. They continued exchanging ideas until the sunset. While listening to her Shadow-Frog, the Princess became certain a vital part of her was sitting right beside her. Her musing gave a peculiar charm to her manner towards him, as though in her presence a part of the Smoky Frog too was sunny and kind. For some moments, she had the inkling she could dance with him, to play with him as she did as a child. But the reality of the creature’s shadowy nature settled in right away. By the time they returned to the Castle, the Princess knew almost everything she needed to know about the Frog-Prince.

They entered the Princess’ living quarters, sat on a superbly carpeted platform, to watch the darkening azure sky through the large front windows together. The Frog-Prince turned his head to kiss the Princess.

“What if we married first?” she said as she turned her face away. “I don’t want to kiss you as some female acquaintance, but as your wife alone!”

“Sounds fine to me, my dear. We will marry, you will kiss me in my bed, and you will make love to me in my form as a Prince.”

“I want to tell you something in all honesty: I wish us to be part of each other, to live together as long as we live,” said Nisha.

“I believe you, dear. I too want to live with you for good, but becoming King and putting my hands on the royal treasures are my wishes as well.”

“Therefore I’m going to make sure your wishes come true,” said Nisha, her sarcastic tone eluding the Frog’s self-absorbed wit. “We will marry tonight to spend our lives together, grow old together and be there for each other. Why don’t you now go to the castle’s bath to wash your entire body clean? You wouldn’t want to turn into a filthy prince and appal your bride, would you?” >>> Part 7