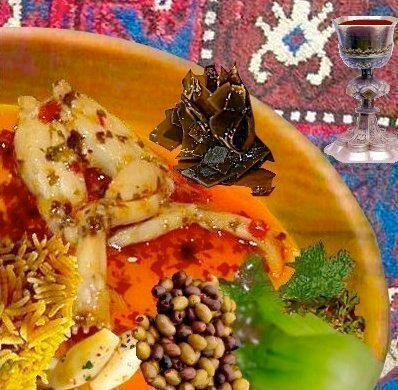 Leaving the frog’s euphoria behind, the Princess rambled through the narrow, high corridors of the Castle, down the stairs to the first-floor kitchen where she ordered a specific menu with her favourite wine from the chef for the coming occasion. As she climbed the stairs up to her living quarters in the company of her two attending servants, she pondered how much she needed to come to terms with her Shadow-Prince without delay.

To this end, she ordered her servants to bring her a black robe and several other items, including a basket of spring flowers for the Shadow Dance. She took her bath, anointed herself with Dark Moon mugwort essential oil, dressed in her long black robe. By the time she entered her living quarters, the servants had made the space clear of all usual furniture except an altar. Every object she had ordered was present at its place: from the black altar cloth, anointed candles, silver glitter, bell, cakes and seaweed, to a cauldron, matches, a mirror, wild-rue incense, leather writing sheets, quill feather pen and plant ink. The spring equinox had coincided with a moonless night, a night of the Dark Moon. The room contained only the light from candles surrounding the altar.

The Princess marked out a circle on the floor with spring flowers, invoked Goddess Allatum, the Goddess of the Underworld, with words that resonated in the chambers:

She rang the bell three times and imagined in her heart the Frog-Prince’s hatred of the Queen, his desire to murder the Monarch, to take over her castle, treasures, and lands. When she deemed herself ready, she took the quill feather pen and a leather sheet, wrote in plant ink everything she identified as the Frog-Prince’s features. She listed everything she considered wrong within the Smoky Frog before reading it over aloud. She read the list again and again…a hundred times, until the list of her Shadow’s malicious qualities and his hatred for the Queen no more troubled her.

Once the energy had been drained off her resentment of the Shadow-Frog, she read the leather sheet over yet again, but added out loud “I forgive the Frog-Prince, release all bitter judgment over his hatred for my mother.” She sprinkled the glitter over the leather list to bless each of the Frog-Prince’s wicked qualities. She folded the sheet and placed it, with the pile of inscribed leather sheets and Dream Scroll, in the cauldron to bury them in the garden later on. She rang the bell three times, took three deep breaths as she tried to empty her soul of all traces of the Frog-Prince’s hatred.

As the Princess readjusted the cauldron lid, Mother Simorq approached her, ushering her to the dining quarters, which was lit by tens of tall candles in silver holders in the centre of the large dining platform. The old nanny-teacher remained in the chambers, hovering about the young woman. On the platform, surrounded by richly designed carpeting, the Princess sat alone before a plate of fried golden-brown frog legs the chef had prepared, while a Castle musician serenaded her by relaxing harp music. She tucked the loose strands of hair behind both ears before dining and wining on a feast of bulky frog legs seasoned in a cider and lemon sauce with herbs, leeks and gingered rice. The dish was also garnished with Nori seaweed, a black herb for the Dark Moon. For dessert, the Castle chef served her chocolate mousse royale with white dessert wine.

As the Princess left the dining platform and turned to leave the chambers, she was delighted by the sight of her shadow cast on the wall. Her returned shadow, which now had the form of a giant frog, followed her as she returned to the living quarters to end her Shadow Dance. At the instruction of Mother Simorq, the Princess clapped her hands for the Castle musicians to play sinister-soothing melodies. Nisha turned, twirled, danced, spun and stopped atop one toe’s tiny tip, before grounding and centering herself, carrying on performing the dance. She danced around the circle of spring flowers, allowing her body to release the residues of resentful guilt, expressing the freedom of her wholeness. She danced with her imagined Shadow-Prince, waltzing as if they were in each other’s arms, raising energy to anchor the Shadow-Dance in her soul. When she finished her dance, she looked into the mirror, told herself with candour how fabulous she was, even with her perceived faults. Then she ordered the servants to remove the circle of spring flowers and all other elements of her ritual.

Moments after Mother Simorq returned to the living quarters to check up on Nisha, she lifted her aged neck, announcing the entrance of the Queen, the Castle staff bowing before her Majesty. The Princess, who had already begun digesting the Shadow-Frog into her body and soul, strode over to her mother, held her arm, accompanied her to sit on soft cushions near the fireplace. On the occasion of the perfect way she had dealt with her Shadow, which had reached the Queen’s ears, Mother and daughter had a celebration of cakes and wine. Queen Opal hailing the annihilation of the Shadow, the Princess, esteeming his assimilation. Besides the emergence of her Shadow against the Light, Nisha looked happier than ever with something different about her, something indefinable, an unusual confidence in the way she held herself. She sat face-to-face to her mother, readied to unbosom herself to her.

“I’d like to tell you something important, Mother,” said the Princess as she leaned forward towards the Queen, tilted her head, lightly cleared her throat to ensure her mother’s full attention. “You gave birth to me; I always loved you for that. However, you also often treated me with some fuzzy form of detachment mixed with caring; I hated you for that,” said she in a soft drawling voice.

The Queen was shocked and gave her daughter a flabbergasted look, “I don’t know what to say”, she said.

“You were always busy, Mother, never there when I needed you the most. And your lies, Mother. Your many vicious lies. Worst of them was the one about my Shadow-Prince leaving town while you had in fact turned him into a smoky frog, forcing him to spend many years in the lake of my tears. Did you not care about what was passing in my soul?“ Nisha pulled a small handkerchief from under her sleeve to wipe her tears. “I want you to know I despised you for a long time. But I’m over it now. I love you, Mother.” A pale smile, like a spark of cold sun on a winter’s day, passed over the Queen’s face; but she remained sulky and silent, while Nisha recounted her childhood and her ambivalent sentiments about her.

Soon the Queen changed her mood to a bright one, as she became aware of the justified nature of her daughter’s reactions to her absences and emotional distances. With her frozen mood melting, she experienced profound warmth about Nisha in her heart, expressed regrets, deep affection, good luck wishes to her daughter.

They alternately talked and kept silent, pondering their own comprehensions until well past midnight. Mother Simorq approached them every half hour to rekindle the fire in the fireplace. She heard the Queen’s exasperated groan when the Princess told her about having had a dream where she helped the Frog-Prince murder her. Then the old nanny heard the Queen’s laughter. She realised how as the time passed the conversation between Nisha and her mother brought them closer to each other. The last log she threw in the fireplace made the fire grow intense. A serene silence fell in the warm air. Queen Opal looked back to see her daughter’s long shadow cast on the opposite wall, resembling the Frog-Prince’s silhouette. She gave it a smile of resignation, kissed Nisha good-night and left the living quarters.

The Princess pulled further away from the glowing fire, reclined on her back, and put her head on the cushions. She imagined herself poised high on Damavand Mountain, the cool mist of the high clouds across her face, the heat of the sun on her scalp. The lightness of life stretched before her in that moment of boundlessness. As she gazed at the mellow, smooth painting over the fireplace, she fell asleep on the soft, puffy cushions. The painting showed an old lime-tree in a forest clearing, shading a little girl who was reading a manuscript on a smooth rock at a blue lake. In the background, a tethered chestnut steed looked back at the dark forest, watching a row of wolf heads behind the trees.

It is said the Princess and her Shadow lived in happiness ever after. But it is also said it was not so, as the Princess was always prone to probe into everything within and without her, including her frog-like Shadow, unafraid of drowning in the depths of her ever captivating soul. It was so, it was not so, let us wish it may be so.