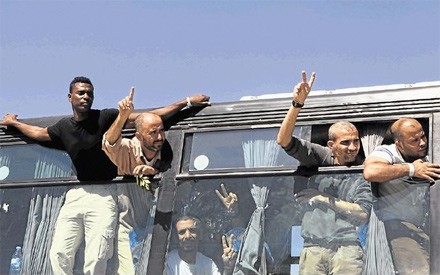 Reactions to several events last week got me thinking about our perception of what is fair and balanced and what isn’t. The web was filled with comments, none of them particularly friendly, about the fact that for Hamas to return Gilad Shalit, the Israelis agreed to liberate a contingent of 1027 Palestinian prisoners. Vox populi – populi in this case myriad analysts and commentators – was raised, there were howls about the insulting imbalance in the swap. What, they said, one Israeli equals more than a thousand Palestinians? Is that what we’re hearing?

That’s what we want to hear. Reality is, of course, far more complex than these reductive worldviews that more and more seem to be the only way we deal with anything. Both Hamas and Israel played the cards they had and used whatever leverage they could to obtain the result they were seeking. Young Shalit needed to be returned to his family and Palestinian prisoners had been held far too long. No one has been humiliated, no one has been put on one side of the scale rather than the other. A price was agreed upon for the transaction, an exchange occurred. All that’s left now is the hope that the swap won’t have far-reaching consequences. One bad consequence would be that Hamas would feel encouraged to kidnap more Israeli soldiers (at this rate of exchange, holding five soldiers hostage should allow all Palestinian prisoners to return home). A catastrophic consequence would be for Palestinians to see Hamas leaders as heroic and Fatah, the only hope for the future of the region, weak in comparison.

Another story ran along similar lines. Two side-by-side photos have been making the rounds of social networks. On the left, Steve Jobs, with the caption, “one person dies and a million cry.” On the right, starving children from some god-forsaken African region, with the caption, “one million die and no one cries.” The fact that so many people “like” the absurd comparison symbolizes the miserable thinking of our times. What has this got to do with that? That our world is one of tragic disparities is a fact. Putting a McMansion on one side and a shanty in a Lagos suburb on the other is a cheap way of pulling at heartstrings. That a genius who changed our world (for better or for worse) should be regretted in death is natural enough. I fail to see how this affects our empathy and sorrow and sense of powerlessness for tens of millions dying everywhere because of natural disasters, hunger, poverty, disease, and terrible regimes.

A while back, I was telling a relative, an rather vehement Iranian woman always ready to jump in with diatribes against this or that culprit (generally blood-sucking Western governments, the U.S. first and foremost) about a sweet story I’d read in the paper: a Washington D.C. police dog, who, after many years of loyal service, was being rewarded with a medal. A photo of the public event illustrated the article, the handsome German shepherd looking pleased at the attention. No sooner had I finished the story that this relative jumped up and, going into full-rant mode, harangued me at length about how shameful it is to honor a dog while in our motherland, Iran, a merciless regime kills hundreds and thousands.

The idiotic comparison had me speechless.

Note: There is nothing to add to Gaddafi’s end. The man was a horror but so was his death. There is no excuse for the way his captors behaved. I suppose we’re lucky they didn’t actually eat him.

AUTHOR
Saïdeh Pakravan is Iranian-born, French-educated, and lives in the United States. Her novel Azadi, Protest in the Streets of Tehran, about the crackdown after the rigged Iranian elections of June 2009, has just been published. Visit her blog at thecounterargument.wordpress.com