TED in Baghdad! Hopefully Tehran, Cairo, Tripoli and Damascus next 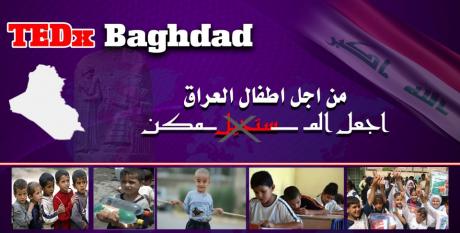 Rumi said ‎”The Eye does not see the Ear until a mirror is placed in front of the eyes.” A society unable to see it own self in a mirror decays rapidly. A society not only needs to see but hear from her ears the voices of street in a mirror of self reflection and self evaluation.

TED dialogue opens up a platform where academicians, intellectuals and common people examine the road map forward. Opening the door of dialogue is key to the closed mind of a man. Small step it may sound but this small opening is a huge progress form debauchery and mental depravity of an apparatus that allowed no dissent under Saddam.

Some may argue with me that I seeing too much in opening of TED in Baghdad. It may be, but if Thomas L. Friedman’s can make global war and peace assumptions based on nations where McDonalds exists; I see no reservation to make a comparison that where TED exists pluralism will find its nascent roots firmly implanted. Thomas L. Friedman’s in 1999 in his book The ‘Lexus and the Olive Tree’ made the observation that: “No two countries that both had McDonald’s had fought a war against each other since each got its McDonald’s”. A kind of tongue-in-cheek, his point was that due to globalization, countries that have made strong economic ties with one another have too much to lose to ever go to war with one another. While the observation have some truth, the conclusions to be drawn are uncertain.

This is culmination of a dream, emergence of a society where free forums of ideas can become centre of academy and intellectual activity. Ted opens its doors in Baghdad! Free thinking is an absolute must for a nation, a dialogue where we agree to disagree but continue to discuss the options, as it happens here right on Iranina.com. Under Saddam this would be just not thinkable! The dividend of the freedom of mind. I wrote this in 2005, it is a pride to see Ted opening its doors in Baghdad Dar-ul- Salam of Mesopotamia.

In an article that we wrote in 2005 ‘May be it was not a war against Islam but a war for Islam!’ we predicted:

Liberalism in Iraq will have to be an organic outgrowth of that nation’s culture; it will be the final test whether Islamic cultures can allow for liberal democracies in the Western mould. I would hazard that the institutions, which will arise in Iraq will be a direct consequence of that nation’s heritage (much as in Japan where the democratic structure has been adapted to the indigenous Japanese cultures and Keiretsu survives despite the destruction of the 4 Zaibatsus). Saddam and Ba’athism was perversion of traditional Iraqi culture and impeded the evolution of a nation state. What will be the result of the invasion is the reversion to the indigenous trends and geopolitical faultlines in Iraq.

May be Iraq was not a war against Islam but a war for Islam. Possibly “Qom Ayatollahs” could learn and like to defuse their activism in favour of Sistanis “quietism.” They should look at Sistani’s apolitical conduct and lack of lust for temporal powers, he took a back seat as “politicians” conducted Iraqi squabbling in typical parliamentarian smoke filled rooms. Instead, arguably the centuries old feud of the control of “marjaiyya” and Najaf insistence to wrest Shiite clerical control back from Qom will be the hall mark of new ideological wrangling between two hearts of Shiite Islam, the militants of Qom and the pragmatic of Najaf are draw into a new squabble. Baghdad will once again take its role as the capital of Islam, with Kerbala and An-Najaf as the minarets bellowing the cry of freedom to the oppressed Shi’ites of the world.

A stable Iraq threatens “Qom” ideological dominance, shifting of “Vatican” of Shiite Islam back to Najaf from Qom where it was taken during Saddam decades old crackdown on Shiite orthodoxy is a bitter dose for ecclesiastical powers of Qom, who now seem to enjoy the global reverence of the Shiites. Like Saudis who despite of the huge “oil” take pride in the title of “custodian of two holy mosques” through which they claim ascendancy of Sunnis Islam as de-facto caliph, Qom enjoys unchallenged global leadership of Shiite Islam. Sistani seems to have put spanners in the works!

My increasing empathy for those who risk their lives for an alien people is fuelled by the hope of a thriving civilization re-establishing itself on the banks of the Tigris. There is a primary reason in that Iraq does not have a history of strong Islamist movement and like other Middle Eastern populaces the Iraqis have strong tribal and clan connexions that prevent the formation of an Islamic state. There must be an underlying national culture to allow for the propagation of a specific Islamic ideology and indeed those who have been of the Islamists persuasion either belong to the minority culture (MMA in NWFP & Baluchistan because of the Pathans) or the urban proletariat (Algeria’s Arab failed to persuade the Berbers to Islamism). Ethnically diverse nations cannot just look to Islam as a bond for there needs to be a strong national culture to provide an uniform platform (Iran’s culture is heavily Persic-centric and has strong assimilatory tendencies, which is why the Kurds of Iran tend to be the most integrated). Iraq is bifurcated along ethnic lines and Islam cannot be the sole unifying influence (perhaps in a few decades if the Baghdadi Sunni culture permeates the entire nation then there is the possibility for an unified Islamic movement but that would also have to assume an uniformity of Arabic dialects). The secession of Bangladesh from Pakistan shows that Islamic ideology alone cannot hold a nation together for there must be a linguistic, cultural or historical rationale. Allah has a thousand names and that axiom holds true in the Islamic Crescent.

Iraqis at any rate are historically a very secular population and seem alien to the orthodox “desert” Islam that is said to be practised from Morocco to Pakistan (whereas the lands from Bangladesh to Indonesia practise the variant known as “Monsoon Islam” derived significantly from Hindu culture). As the war taught us Iraq is pretty much a few scattered cities in Al-Jazirah (the island between the Tigris and the Euphrates) and the tribes in the desert as far as the eye can see. In the years of infrastructure and redevelopment the possibility of the population turning to extremist Islam seems rather far-fetched for relatively active and burgeoning economies tend to have politically apathetic populations.

Iraqi Shi’ism does not allow for a strong religious presence in the government, the Ayatollahs may be running the show in Basra but they are theologically prohibited from wielding power in the style of Khomeini. It isn’t in the culture of south Iraq (or of any other Islamic nation) to embrace a theocratic form of government as in Iran.

Freedom of mind in this open age of communication cannot be harnessed, beware those nations where intent is censored, where voices of people are not heard and the leadership acts like an ostrich, their days are numbered. TED is coming to you soon Tehran.