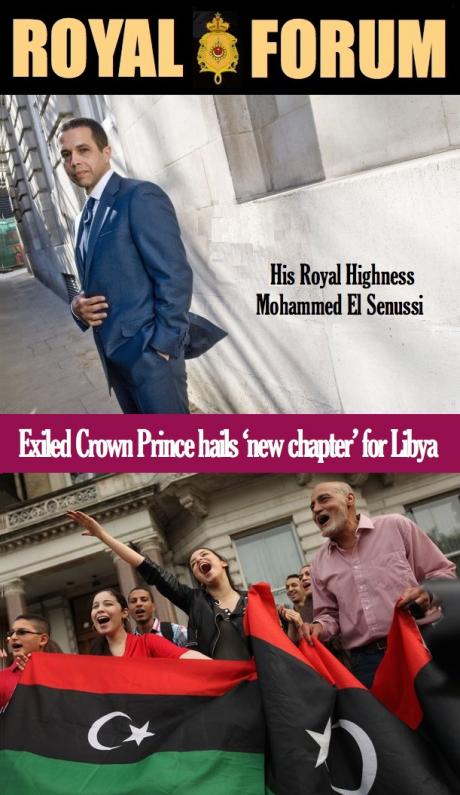 LONDON—Muhammad al-Senussi, the heir apparent in Libya’s overthrown monarchy, said the death of dictator Moammar Gadhafi was a victory for peace, freedom and reform in his homeland.

PHOTO ESSAY: 1960s Libya: A Glimpse of Life Before Gaddafi

LONDON—Muhammadal-Senussi, the heir apparent in Libya’s overthrown monarchy, said the death of dictator Moammar Gadhafi was a victory for peace, freedom and reform in his homeland.

Speaking from exile in London, the crown prince said a new chapter had begun in Libya’s history.

“The flag of freedom is now flying in Sirte and across Libya on this historic day,”he said, hailing the unity that helped “rid the country of evil”.

“There will be challenges ahead as we seek to rebuild our country. But if we show to the world that we are committed to democratic change and continue to display the unity that has led to victory then Libya will succeed and prosper.

“Freedom, education, healthcare and sharing the nation’s wealth — all of which have been cruelly denied to Libyans for more than 40 years — must become the newcornerstones of our society.”

Libya’s 1951 constitution created a constitutional monarchy with his great uncle, Idrisal-Mahdi al-Senussi, as the king. He was overthrown by Gadhafi in 1969.

“The new Libya must be organised under the rule of law and there is no greater time than right now to demonstrate that commitment by ensuring there are no acts of vengeance against Gadhafi’s supporters and that justice is dealt with by the courts,” the crown prince said.

“Today begins a new chapter in our history. I look forward now with confidence that the people of Libya will build a future we can all be proud of.

“Now is the time to put the era of terror and oppression behind us.”

The crown prince, who also paid tribute to the rebel fighters who ousted the Gadhafi regime from power, made no mention of returning to Libya himself.

Mohammed El Senussi (Sayyid Mohammed al-Ridabin Sayyid Hasan ar-Rida al-Mahdi El Senussi; occasionally spelled as “…Al Senussi”, born 20 October 1962) is the son of Crown Prince Hasan as-Senussi of Libya, and of CrownPrincessFawzia bint Tahir Bakeer. Born in Tripoli,he is considered by Libyan royalists to be the legitimate heir to the SenussiCrown of Libya.

Colonel Muammaral-Gaddafi overthrew Mohammed El Senussi’s great-uncle King Idris and his fatherthe Crown Prince on 1 September 1969 in the Al Fateh Revolution. Al-Gaddafi detained the Royal Family and held them under house arrest. In 1982 their house with belongings was destroyed and the family moved into a shack onthe beach. Before being allowed to emigrate to the United Kingdom in 1988, Prince Mohammed spent some time in the early eighties working at the Libyan Ministry of Agriculture.

Mohammed El Senussi received his education in the United Kingdom. On 18 June1992, he was appointed as heir by his father to succeed him in death as Crown Prince and Head of the Royal House of Libya. He is unmarried.

THE MORAL DILEMMA: BBC Debate – Should Nato have Interfered in Libya?