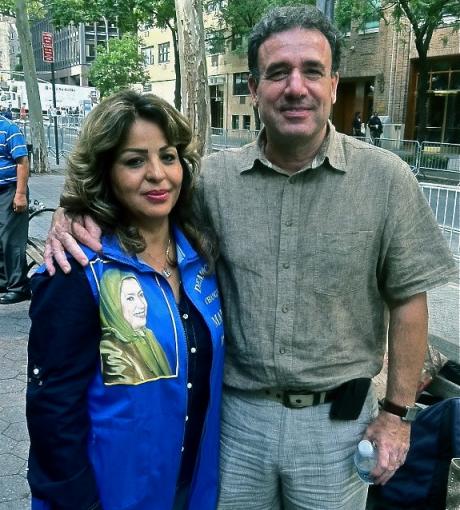 A new groundbreaking report by the Center for American Progress (CAP) uncovers what can only be described as a complex but organized web of groups and individuals working to undermine Iranians in public life and foster anti-Iranian sentiment. The shocking report reveals the names of seven donors doling out $42.6 million to hate groups and pseudo-scholarly think tanks. The 138-page report concludes that the industry’s success depends crucially on Iranian collaborators.

Only a thorough treatment of the subject can do justice to the report’s findings, but for brevity’s sake a look at one partnership may be instructive.

Exhibit A, professor Daniel Pipes of the Washington based Middle East Forum (MEF) and his Iranian underling, a recent immigrant to the United States from Paris by the name of Hassan Daioleslam (Dai for short).

In public policy circles Daniel Pipes has come to be known as to Iranians what David Duke is to African-Americans, and a glance at his record reveals why.

In the 1980s Pipes became a in his war with Iran. In the aftermath of 9/11, Pipes became one of the most influential neocons advocating war with Iraq—and there was a lot of competition for that job.

After successfully agitating for war, Pipes turned his attention to Iran. In an article titled “How to Save the Obama Presidency: Bomb Iran,” Pipes outlined his best case for war and even argued for boots on Iranian soil.

Pipes did not anticipate what was to come. His long-time lust for “bombing Iran” was being met with surprisingly fierce resistance. This time, Washington’s Iran policy was being significantly influenced by one unexpected source—Iranian experts and the Iranian-American community.

A few words must be said about Pipes’ anti-Iranians before we move on. The hate-infested venom of Daniel Pipes can best be demonstrated using his own words. Pipes is on record for promoting the idea that Iranians and Muslims should be rounded up and tossed into concentration camps. According to Pipes the people of the Middle East mere “brown-skins” with bad hygiene.

Examples abound, but I digress. As disgusting as Pipes’ racism is, it is what keeps him up at night that concerns us most. In a stunning moment of candor at a gathering of the American Jewish Congress (AJC), Pipes revealed his belief that “from the Jewish point of view, the presence, and increased stature, and affluence, and enfranchisement” of Iranians and Muslims in America entail what he called “true dangers” for America’s Jewish community.

This belief gave birth to The Legal Project, the intimidation arm of the MEF. Central to its mission is to delegitimize, intimidate and destroy Middle Eastern voices seeking a place in the political arena through legal means. The project is backed by millionaire individuals and foundations who also finance other pet projects like the “Judaization” of East Jerusalem and it’s cleansing of non-Jews.

Enter Hassan Dai, the Iranian lackey in the Pipes campaign. Pipes’ reasoning in backing Dai is clear. There is an end goal of pushing the US to war with Iran. To achieve this, opposing views must be suppressed. An emerging Iranian political class in America therefore cannot be tolerated. The individuals and groups must be delegitimized, and their support within their own community undercut.

The decision to employ Dai makes enormous strategic sense. The neoconservative movement since its maturation in the 1970s has always been careful to use non-neoconservatives as spokesmen for their agenda. A recent obvious example is Iraq’s Ahmed Chalabi. The CAP report calls these individuals “validators”—foreigners used to give the neoconservative narrative a stamp of validity.

The rising “validator” of the Iranian community is Hassan Dai. Uncle Hassan is now the de facto conduit of neoconservative influence in the Iranian community. With a suspect past as part of the Mujahedin-e Khalq’s (MEK) inner-circle in Paris, Dai moved to Arizona where his sole undertaking became the smearing of all Iranian policy experts whose views stand to the left of John Bolton.

Frequently using 10 degrees of separation, Dai has targeted the likes of Rudi Bakhtiar, Vali Nasr, Ray Takeyh, Trita Parsi, Karim Sadjadpour, Christiane Amanpour, and many others as agents of the Islamic regime. Pipes has done the same, though the brunt of his dirty work has been delegated to “brown-skinned” Hassan. Perhaps to reward Dai for good behavior, Pipes recently wrote a column urging the administration to “unleash” the MEK against Tehran.

The $42.6 million dollar attack machine has chosen its allies carefully. At a conference of the MEF, Dai was invited to discuss a supposedly vast web of “jihadists” and “Islamists” in the Iranian-American community that must be stopped. In his opening remarks, he explained that the “easing of sanctions” against Iran induced him to start a campaign against what he calls “the Iranian web.”

The House Persian won the rapturous applause of conference attendees. The Legal Project turned on the money spigot and provided, pro bono, the services of Bradley Barenson, the Bush administration’s lawyer on defending torture. Among the other perks Dai received was free counsel, including Dai’s work in order to just escape the definition of what the US legal system considers libel.

Ultimately, it was only a mere twenty-five years ago when Saddam savagely employed chemical weapons on Iranians, forever devastating countless Iranian families. The US government is believed responsible for preventing action against Saddam in the UN for that war crime. Iranians in the United States said nothing and did nothing. They couldn’t.

The Daniel Pipes vision of America is a reversion to those dark days. A time in when he could facilitate the killing of Iranians unhindered, and not have to deal with those pesky Iranian-Americans that might object.
We, Iranians of all political stripe, are duty-bound to never again revert to the misery of helplessness. Yesterday’s pitiful displays have given way to a new environment in which the US government gives weight to Iranian-American concerns. The decision to monitor the Islamic Republic’s human rights violations came largely at the behest of Iranian-American pressure. Unlikely a few years ago, unimaginable in the 1980s.

Lastly, I cannot comment on the alleged odor emanating from Uncle Hassan’s body, but the betrayal and subservience brought to light by these recent findings is sure to offend all senses in all red-blooded Iranian. With the proverbial cat officially out of the bag, Dai and associates will no longer be given the benefit of the doubt. In the eyes of Daniel Pipes, you are probably “doing a heck of a job, browny,” but the time has ended where your own community gave you a free pass.