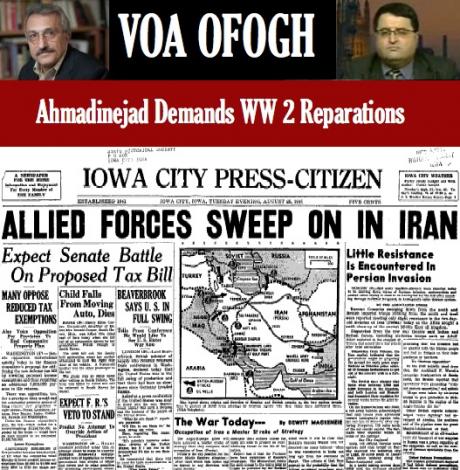 « Iran suffered immensely after it was invaded by the Allies during World War II and deserves reparations, » Iranian President Mahmoud Ahmadinejad said in a live broadcast on state television Saturday. The hard line Iranian President has ordered the formation of a team to study the damages the country suffered from the 1941 Allied invasion in order to demand compensation. Ahmadinejad also warned that Iran may also demand compensation for the damages it suffered during World War I, the Western support for the former Pahlavi Dynasty and its hostility towards Iran since the1979 Islamic revolution.

A BRIDGE TO VICTORY

Churchill, Stalin, and Roosevelt meet in the capital ofIran to decide the future of the world.

During the World War 2 , After the German Nazi occupied Poland , thousands of Poles including Jews escaped Poland to take refuge in Iran. Many also Fled the Soviets and their pogroms and political witch hunts. This is a historical film of their journey.