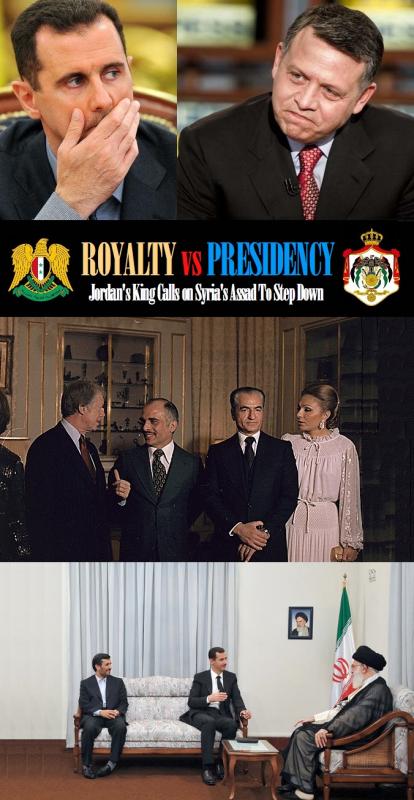 Jordan’s king on Syria’s president: ‘I would step down’ (CNN)

Lyse Doucet of the BBC Reports :

King Abdullah’s remarks, coupled with the Arab League’s decision to suspend Damascus, mark a turning point in the Arab world’s approach to Syria.

But Jordan’s monarch was emphatic that President Assad stepping down was not enough. His call to the Syrian leader was about changing a “system”. He admitted that no-one was clear how to do that, and the Syrian regime still believed it was “in a fairly comfortable position”.

King Abdullah, like many others, also emphasised there was great concern about “life after Bashar”. He warned that any outside intervention in Syria would open “Pandora’s box”.

The relationship between two Arab leaders, seen as a new generation when they took over from their fathers, has been under growing strain. But King Abdullah said he still believed the Syrian leader had “reform in his blood”. He had reached out to him earlier this year, even if, as he admitted, Jordan was not “by any means… a perfect story”.

HM KING ABDULLAH has become the first Arab leader to demand that President Bashar al-Assad of Syria should step down. UN sources say more than 3,500 citizens have died since the crackdown on protests began in March 2011

Speaking to an international newsagency, Jordan’s King Abdullah has called for Bashar al-Assad, the president ofSyria, to step down in the interest ofthe Syrian people.   Jordan has beencritical of its northern neighbour Syria’s crackdown on anti-governmentprotesters in recent months.  The latest statements will have profound effectsfor Jordan-Syria relations.   Al Jazeera’s Nisreen el-Shamayleh reports fromAmman.

Archive Footage on Jordan andits relationship in the Middle East. Ofcourse, King Hussein is featured in it. There is talks with Isreal, Saudi Arabia, Iran, Egypt, Colonel al-Gaddafi, United States, and the USSR

Jordan King: “Assad Must Step Down”

King Abdullah told the BBC that if he were in Mr Assad’s position, he would make sure “whoever comes behind me has the ability to change the status quo”.

He urged President Assad to begin talks on an orderly transition of power.

Many Arab leaders have condemned the crackdown on months of protests in Syria. Dozens of deaths are reported in the latest unrest on Monday.

Both the Saudi and Qatari ambassadors left Damascus in protest at the repression. The Arab League voted on Saturday to suspend Syria’s membership.

“If Bashar has the interest of his country [at heart] he would step down, but he would also create an ability to reach out and start a new phase of Syrian political life,” he said.

“That’s the only way I would see it work and I don’t think people are asking that question,” he added.

King Abdullah warned there would be “more of the same” if whoever replaced President Assad did not change the status quo.

Jordan, which borders Syria, has been increasingly critical of the crackdown on anti-government protesters. Many Western powers have urged President Assad to stand down.

Both the EU and the US have said he has lost legitimacy but have ruled out military intervention.
The European Union on Monday tightened sanctions on Syria.

EU foreign ministers meeting in Brussels added 18 Syrian officials to a list of people affected by a travel ban and asset freeze.

The Arab League is set to hold another meeting to discuss Syria on Wednesday.
Russia on Monday condemned the suspension. “Someone really does not want the Syrians to agree among themselves,” Foreign Minister Sergei Lavrov said in Moscow. In the latest violence, the Local Co-ordination Committees – a network of opponents to President Assad’s rule – said 40 people had been killed on Monday, including 20 in the restive southern province of Deraa.

There are also reports that about 20 members of the security forces were killed in a clash with defectors from the Syrian army. Such claims are impossible to verify as the Syrian government has severely restricted access for foreign journalists.

The UN says more than 3,500 people have died since the start of the protests in March while the Syrian authorities blame the violence on terrorists.