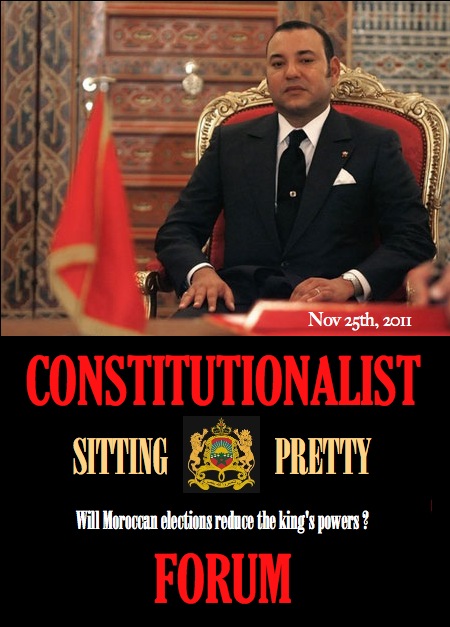 Moroccan select a new lower house of parliament on November 25th, in the first national vote since the approval of constitutional reforms billed as laying thefoundations for a fully-fledged constitutional monarchy. About 13.6 million Moroccans have registered to vote. About 4,000 observers from 16 Moroccan and foreign bodies have been accredited by the electoral authorities.

King Mohammed VI presented the changes as a far-reaching concession to Arab Spring-style pro-democracy protests, but activists believe they will do little to change the actual power structure and have called for a boycott of the elections.

INSIDE STORY- THE KING AND THE CONSTITUTION

Morocco’s King Mohammed VI promises changes as part of a “historic transition” into democracy but are people buying it ?

Moroccans elect a new lower house of parliament on 25 November, in the first national vote since the approval of constitutional reforms billed aslaying the foundations for a fully-fledged constitutional monarchy.

King Mohammed VI presented the changes as a far-reaching concession to Arab Spring-style pro-democracy protests, but activists believe they will do little to change the actual power structure and have called for a boycott of the elections.

Moderate Islamists are hoping to do well in the vote after a similar success in Tunisia’s first democratic election a month ago.

How significant are the elections?

As a result ofthe constitutional changes approved by 98% of those voting in a 1 July referendum, the new parliament will have a greater share of power and – in theory – will play the leading role in a legislative process previously dominated by the king. The position of the prime minister, who must now be appointed from the largest party in parliament, has also been enhanced, gaining the authority to appoint government officials and dissolve parliament. The reforms were supported by all the main political parties, which called on their supporters to back the proposals in the referendum.

The Moroccan Parliament opened its doors for the first time in its history to 30 young Moroccans who hope to shape their country’s destiny by participating in the legislative process after the next elections.

Morocco Leads Muslim World in Women’s Rights (The VJ Movement TV, April 18th,2011) :
A look at the changing nature of woman’s rights in Morrocco. Especially highlighted is female participation in politics and electoral processes, and the effect of the ‘moudawana’ on women in Moroccan society.

What do the critics say?

The 20 February movement, which spearheaded Morocco’s pro-democracy protests earlier this year, has called for a boycott of the elections, dismissing them as a “piece of theatre”.

It says the constitutional changes approved in July are superficial, and perpetuate a “facade of democracy” that – it says – has disguised continuing royal rule for decades.

Critics of the reforms point in particular to the fact that the king will still have wide-ranging executive powers, in particular control over foreign, defence and security policy.

Activists also say the reforms will not end the behind-the-scenes dominance of the “makhzen” – a power apparatus of veteran politicians, powerful business people, the security forces and royal officials controlled by the king through a system of patronage.

What are Moroccans voting for?

The vote is for the lower house of parliament, the Chamber of Representatives, which is elected for a five-year term.

The upper house, the Chamber of Counsellors, which is elected indirectly by local councils, professional organizations and trade unions for nine-year terms, is not involved in this election.

How does the system work?

Of the Chamber of Representatives’ 395 members, 305 are elected in 92 multi-seat constituencies from electoral lists put together by the parties. Under the “closed-list” system, voters can only chose between the party lists, and cannot modify the order of candidates on them.

Of the remaining 90 seats, 60 are reserved for a national list of women. A further 30 seats are newly earmarked for candidates under the age of 35, in a move widely seen as a concession to the largely youthful pro-democracy activists.

About 13.6 million Moroccans have registered to vote.

What is the voters’ mood?

In contrast to the excitement on display in Tunisia’s first post-dictatorship elections in October, there are fears of a low turnout, which could be seen as potentially undermining the credibility of the king’s reforms.

At the last elections in 2007, only 37% of the electorate bothered to vote, amid a widespread sense of disillusionment with Morocco’s established politicians.

What are the main political groups?

Founded in the1940s as the main opposition to French rule over Morocco, the centre-right Istiqlal is one of the country’s oldest parties.

It has been a member of numerous government coalitions in the past few decades, having softened its traditionally critical stance towards the monarchy.

Its leader, Prime Minister Abbas El Fassi, has headed a five-party coalition government since the party become the largest in parliament at the last elections with 52 seats.

The PJD is Morocco’s largest moderate Islamist force, and won 46 seats to become the second largest party in parliament at the last elections.

Modelling itself on Turkey’s Islamist-derived governing party of the same name, the PJD is widely tipped to make further gains this time around, following the victory ofthe similar Ennahda party in Tunisia’s elections. PJD leader Abdelillah Benkirane has said his party is “ready for the responsibility of government”.

Traditionally seen as Morocco’s main centre-left force, the USFP is currently a member of the government. Formed in the 1970s, it is, along with the rest of Morocco’s left, widely seen as a fading force.

The party won 38 seats in the last elections, down from 50 five years before. Its leader is veteran politician Abdelouahed Radi. In the run-up to the 25 November poll ithas cooperated closely with two smaller centre-left parties – including anothermember of the governing coalition, the Party for Progress and Socialism (PSS – 17 seats) – in a bid to revive the left’s fortunes.

The Alliance for Democracy, a loose eight-party pro-monarchy electoral bloc, was formed on 5 October in a move widely seen as aimed at countering the predicted rise of the PJD.

It includes two of the current five governing parties – the centre-right liberal Popular Movement, which won 41 seatsin the last parliamentary polls, and the royalist National Rally of Independents, which won 39.

Party of Authenticity and Modernity

, which was founded in 2008 – a year after the last elections – by one of the king’s right-hand men, Fouad Alial-Himma. It subsequently won 19% in local elections, prompting speculation that it might become a significant new force in Moroccan politics.

Media observers believe the bloc is an attempt to form a “party of the king” capable of becoming the largest party in parliament, which would allow the monarch to pick one of its members as prime minister. The bloc itself says its aim is to prevent the “Balkanisation” of Morocco’s already fractious political landscape.

Will the elections be monitored?

About 4,000 observers from 16 Moroccan and foreign bodies have been accredited by the electoral authorities.