How Useful Are Iranian Know-It-Alls And Their Advice? Part 7 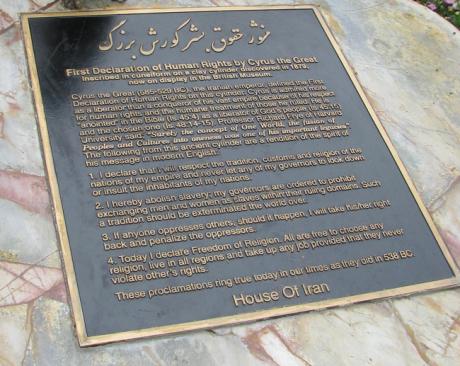 I’m never surprised when I find out I’ve been lied to about something, by Iranians.

Since Iranians worship prestige, they’ll do anything to get it or keep it – including lying.

(They’ll also do anything to lower someone else’ prestige who they are competing with – including lying).

I should have guessed it was a lie from how much they talk about it.

Yes, Iranians spend a lot of time talking about Cyrus the Great and his bullshit cylinder.

According to the fantasy they’ve created, Cyrus and his army of little Iranian angels and fairies must have gone around granting people their human rights, and spreading peace and happiness.

People were so happy that maybe even the spin of the earth’s rotation might have been impacted by all the smiling, affecting the trajectory of the sun, the spin of the galaxy…. impacting the fabric of space and time, and the whole universe!

Alas, this fantasy seems to be false.

According to archeologists, the cylinder really didn’t have all that much to do with anyone’s human rights.

Above is a false translation that Iranians in America – bless their truth loving souls – have put up on display for the Americans.

The actual translation can be seen here, from the website of the British Museum:

I’m no expert on this, but there appears to be nothing about human rights in the text, or a declaration, or a guarantee of anything.

The king enters into an area without a fight. People bow down and kissed his feet. In other words, troops march into an area peacefully, and are welcomed. Gods are returned to their sanctuaries. People are happy. The wall of Babylon gets strengthened…

I can’t find anything like what the wise old Iranian know-it-alls were bullshiting me with.

But Iranians aren’t interested in the truth about anything. Everything to them is a device, to be used for either self-aggrandizement, or for beating someone else down.

The pleasures of discovery or knowledge for its own sake are a waste of time to them.

Had they studied their own cylinder, they would actually have read the translation of what’s in it.

I don’t know a single Iranian who can tell me a single actual sentence from the cylinder.

I had to dig that up, and read the writings of those crazy time-wasting foreigners who translated it.

Iranians, of course, didn’t discover the cylinder. It was discovered by evil foreigners, in Iraq. They didn’t translate it, either. In fact, they still don’t know what’s in it.

All they know is that they’ve found a new device – a new sort of toy – which they can use to decorate themselves and show off with.

Iranians have succeeded in turning an important archeological discovery (which they had nothing to do with) into another gimmick for their latest round of showmanship.

They’ve succeeded in bullshitting enough people that the myth is now widely believed.

It seems that Shirin Ebadi referred to this myth in her acceptance speech for the Nobel Peace Prize.

George Bush repeated that rubbish here in a speech (which Iranians just sucked up, being desparate and needy for anything to make them look good):

So what’s REALLY in the cylinder?

In fact, if you want the truth about anything, don’t ask them.