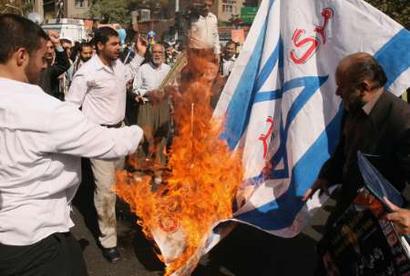 I was reading JK’s recent blog about the Cyrus Cylinder, and clicked on his link to the British Museum site’s translation of the Cylinder.  So, what do I see?  It turns out the Cylinder was translated by a gentleman by the name of Irving Finkel.  That’s right:  a Jew!  And he’s not just any Jew, he is a member of the Anglo-Israel Archeology Society.  I bet he’s a Zionist too!   How hilariously ironic is that?  The cornerstone of Iran’s identity was translated by a Jew.  All these numb nuts who spew their vile anti-Semitic bullshit on the streets of Iran and their genocidal thoughts on the pages of Iranian.com have to live with the fact that the nature of the very nation that they are so proud of was defines by a Jew.

How sad!  Three thousand years of history, and if it wasn’t for some foreign archeologist the Cyrus Cylinder would still be sitting in the middle of the room while Iranians reacted to it like these guys react to the monolith.  The thing sat there for 2500 years while we obsessed with poetry composed by a bunch of pedophile religious nuts.  I guess reaching “irfan” was more important to us than understanding who we are and where we came from.   Good thing the British safeguarded this thing.  Otherwise, we probably would have called it “ketab-e-soleiman,” grounded it up and built a brick out of it for some imamzadeh’s shrine.

Anyway, back to the subject.  So, what are you Jew haters going to do now?  You know who you are.  The ones who post the Protocols of the Elders of Zion on IC. Your world is now turned upside down.  I think there’s not much else left for you to do but to get rid of this shame by committing suicide.  The more of you the better.  Take the ones in Iran with you too.  But make it count, though.  Go to Gaza or Nabatiyeh, strap some C-4 to your chests, make a martyrdom video and head for an Israeli checkpoint.  Take some of those Jew pigs with you.  That is, of course, if you can avoid being the recipient of a bullet in your foreheads before you reach the checkpoint.  We’ll be rooting for you from the sidelines.  Happy travels!