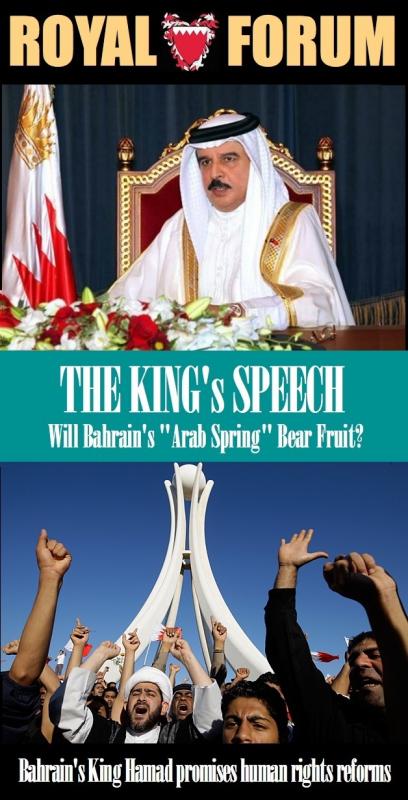 The king of Bahrain has promised reforms to prevent abuses by security forces, after an independent report about a crackdown on protests said authorities had used “excessive force”. More than 40 people died in the unrest, which some officials blamed on Iran.

Rupert Wingfield-Hayes BBC News, Bahrain: «The report by the Bahrain International Commission of Investigation was much more critical than many in Bahrain had believed possible. Before it was published, many inthe Shia community had dismissed it as a sham, accusing its authors of being bought off by the regime. Now those voices have been silenced by the evidence laid out by Professor Cherif Bassiouni and his team.

style=”margin-bottom: 12pt; line-height: 16pt”>The list of accusations is long. The Bahraini government has been found guilty of illegal arrests, forced confessions, unfair trials, and most importantly the systematic use of torture by the police and internal security agencies. It will all make very uncomfortable reading for the King and his government. But it also represents an opportunity for the King. Professor Bassiouni told me he hopes the King will be able to use the report as a tool to push forward with reformand to isolate, and ultimately remove, hard-liners inside the Sunni royal government.»

What is the BICI (Bahrain International Commission of Investigation) ? (Al Jazeera):

US Secretary of State speaks about Bahrain and the need for reform during her Keynote Address at the National Democratic Institute’s 2011 Democracy Awards Dinner.

Bahrain Monarchy From British Empire to US Fifth Fleet (The Real News):

Iran’s parliament passed a bill in November 1957 declaring Bahrain to be the 14th province of Iran, with two empty seats allocated for its representatives.(More Here)

Shah of Iran responds to Mike Wallace on the «Persian Gulf» Vs «Arabian Gulf»:

1971 an Iranian MP Mohsen Pezeshkpour of the Pan-Iranist party,passionately objects to Shah’s decision to give away oil-rich Bahrain inreturn for 3 Persian Gulf islands. Ardeshir Zahedi then Minister of Foreign Affairs looks on in Silence:

The king of Bahrain has promised reforms to prevent abuses by security forces, after an independent report about a crackdown on protests said authorities had used “excessive force”.

King Hamad expressed “dismay” at the findings and vowed to ensure “those painful events won’t be repeated”.

The much-awaited report into the events in February and March said a number of detained protesters had been tortured.

More than 40 people died in the unrest, which some officials blamed on Iran.

Bahrain has a majority Shia Muslim population and the violence has fuelled anger against the ruling Sunni royal family and political elite.

More than 1,600 people have been arrested during the protests, which have continued sporadically since the peak of the unrest eight months ago.

The summary of the 500-page report was presented by the Bahrain Independent Commission at King Hamad’s palace in Manama on Wednesday.

The head of the commission, Professor Cherif Bassiouni, said investigations had found officials “used excessive force”. Many detainees were subjected to “physical and psychological torture”, he said.

Inmates, headded, had been blindfolded, whipped, kicked, given electric shocks and threatened with rape to extract confessions.

Prof Cherif said the evidence seen by the commission “did not prove a clear link between the events in Bahrain and Iran”.

He also stressed that it was a “unique and historic” event – the first time a state inthe region had voluntarily and without international pressure investigated unrest in its own country.

Prof Cherif is aformer UN human rights lawyer. The other commission members are all non-Bahrainis.

The inquiry interviewed more than 5,000 people, including hundreds who say they were tortured in prison

The king, Sheikh Hamad bin Isa Al Khalifah, heard the report sitting on a red and gold throne in front of an audience of nearly 1,000 people.

He stressed thathe never again wanted to see Bahrain paralysed by “intimidation and sabotage”, adding: “Nor do we want, ever again, to discover that anyof our law enforcement personnel have mistreated anyone.”

He promised to reform Bahrain’s laws to protect freedom of speech and other basic rights.

“We do not want ever again to see civilians tried anywhere else but in ordinary courts,” he said.

The monarch said the report opened “a new page” in Bahrain’s history, promising to sack those officials who had abused their power.

If the king acts to change the way the country is run, then the outcome could be positive, the BBC’s Rupert Wingfield-Hayes in Bahrain reports.

If not, then more violence is likely to lie ahead, our correspondent says.

VIDEO: Manoto TV’s Documentary on the Persepolis Celebrations of Oct 1971

Shah to Nixon on “Revolutions” vs “Evolutions” in Middle East (1969)