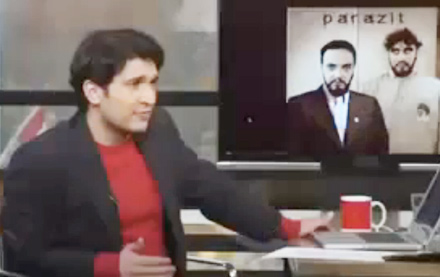 On November 17, the Al Jazeera show the “Stream” (which I am not sure they get the urological metaphor) hosted Kambiz Hosseini and Saman Arbabi the co-creators of the top anti-government TV show Parazit in a seemingly harmless interview. Or so that’s how it started.

Within a few minutes of the introduction though the real motives of the “Fox News of Arabia” came to the surface and the slick turdiness of sensationalist back-stabbing, jealousy-lined and Hannity-Limbaugh-Murdoch pick a subtle point and ambush it style of journalism that AJ is only known for, came through. And I don’t seem to recall a single AJ story about the emir of Qatar and his coup d’etat and illegitimate rule over a merely former British protectorate. EVER! Apparently the people of Qatar at least, deserve freedom from inspection and any sort of probing analysis by AJ. But they most certainly don’t deserve freedom from an Absolute Monarch. Apparently. According to the AJ charter and mission.

Saddest of all to see though, was the mistaken sway of veteran blogger Nima Shirazi whose innocent idealism and naive objections fed the point being so cheaply exploited by AJ, namely that the show is sponsored by the VOA.

Unfortunately or conveniently, Nima has lost the real point here. Maybe his music is better. Nima jan, I’m not so sure that actually labeling yourself as a political commentator/musician helps either career. I know it’s America and unlike today’s Iran you can be and say whatever you want, but jooneh man pick one. You’re young, but not that young. Grow up. I’ll go out on a limb and as an Uncle say, “Stick to your writing, put the guitar down.”

First to the host of the stream Nimrod Garda or Imran or whatever his name is, since I cannot find the correct spelling anywhere on the AJ site (Got job security?), and given the ridiculously staged performance, I’m sticking with Nimrod. What a South African Indian Cricket reporter is doing on an Arabian TV network, and how that’s in anyway credible, I can’t begin to understand except apparently some Indians like to work anywhere for anyone they can except India. Sorry to all Indians who work for anyone anywhere except India. I just don’t get it. I mean if India is free and all, why work anywhere else?

Nimrod said “Millions of Iranians watch Parazit”, and that the show is produced by the VOA. The truth is that the show is produced by Saman Arbabi, who like many Iranians is a technically gifted and creative one-man machine. If you watch the show, you can see this in action. Pre-set stand alone cameras pointed at the host, Kambiz Hosseini, an actor by trade, an angry Iranian by birth, and a gifted comedian by God, performs his well-timed pointed schtick with the green screen, animated edits, and sound effects courtesy of whatever meal Arbabi intends to serve us each week.

The truth is that the show is merely BROADCAST by the VOA. In fact, the mission of the VOA, which is legally bound, is to do 3 things:

1- Broadcast (ONLY) Truthful News
2- Represent “significant American thought” and “not any single segment of American society”
3- AND MOST IMPORTANTLY “Present the policies of the United States clearly and effectively, and will also present responsible discussions and opinion on these policies. (Public Law 94-350)”

While it is the responsibility of the VOA to undertake this, this does not mean that PARAZIT HAS TO!!!!

In a sense though you could say PARAZIT represents America, if you care about freedom of speech at any cost. Especially your life.

Ahmed Shihab-eldin the digital producer of Stream, who himself got his own start on another US government paid for vehicle PBS, and essentially Arbabi’s counterpart/nemesis on AJ, what I can only call STUPIDLY, suggested that under the Shah more political prisoners were tortured and killed than the current government. With retardedly uninformed comments like “[suppressing political dissent] But no, they’re much less then they were back then.” To set it straight for everyone, the factor is 10. Or this government has killed and tortured 10 times more than the Shah ever did. This is a statistically proven fact by anyone’s numbers you care to use. Funnily enough most of those the Shah did, are the same ones this government is now after, or of the MEK ilk that everyone seems to hate these days.

But the absolute travesty of the lie that Shihab-eldin naively uttered in his obvious attempt to merely one up Arbabi, only betells the sheer youth on the show, who were by now going at it as if. As if any one of them is old enough to know anything really pointed about Iran in the past 30 years, worse as if any of them is competent to compare it to the past 50.

Saddest of all however was our own Nima Shirazi. Coddled by a comfortable politically free life in the US, that has afforded him the luxury and ability to learn and exercise his not insignificant beautiful Iranian mind to the point where he could intellectually and thoughtfully pose the obvious All-American argument he has posed. Which is that maybe Parazit would have more credibility if it was not under the arm of that other Cold War era VOA that everyone still dreams those sexy “Khoreshteh Espionage” dreams about. You know, the same one that BBC Farsi suffers from.

The saddest of all however is none of these brats really gets the reality of the situation Parazit is in.

Faced with certain death by the Iranian government were the show produced in Iran, this show is un-producable without a safe haven that the US and it’s free speech laws provides. It’s not so much that the show is produced in the VOA studios as those studios actually protect the show physically. NO commercial sponsor is currently brave enough to weather the onslaught by the government of Iran. Simply, the show which even Shirazi will admit is absolutely necessary, would be impossible without the protection and sanctuary that the VOA and US offers.

Ironically the very same sanctuary of the US which allows wonderfully bright and shiny minds like Shirazi to object, very reasonably in fact. The conditions you live under however Nima jan, aren’t actually real. The real conditions, which are always unfair and cheat, are that the show would be DOA without VOA.

Given ample historical precedent were the show produced commercially in LA or let’s say out of Nima’s house, the amount of time it would take to shut down the show with an “accident” or any of the other widely used “techniques” the government of Iran has used to assassinate over 800 documented opponents overseas, is about 2-days.

So, given the facts we know. And the conditions of the times we live in. Having a political satirical show that analyzes the realities of a fast failing Iranian government essentially sponsored by one sponsor, the VOA is entirely acceptable. With gratitude even. Is it perfect? Of course not. Is there any other possible option to criticize the crimes Iran commits on a daily basis? Same answer. Of course not.

Since the imported and hypocritical folks at Al Jazeera haven’t bothered to read ANY history and seem incapable of the concept of perspectives and comparisons never mind right and wrong, let me at least clear it up for them. Today’s Iran is oppressive, violently suppressive, murderous, and obligated to use any and all tactics to protect it’s tyranny over a nation of people and their vast pre-islamic history, that it has nothing but the greatest ethnic disdain for. The fact that when you continually interview them and they appear polite and smile courteously, is a lie you’ve naively believed. You know the same one that makes you think the emir of Qatar is “benevolent” by funding you.

But it is today’s real Iran we must live with. Not AJ’s illusion of the smiling polite Iran. Not the Shah’s Iran. Not the post Mossadegh 1953 Iran. But today’s Iran.

What Al Jazeera has in essence suggested with this small example of a great pile of steaming naivete, is akin to saying, “Come on Saman, Hitler’s Germany wasn’t anywhere near as bad as the Kaiser’s Germany of WWI, was it now? We interviewed the Gestapo last week and they seemed like fine fellows!”

NOTE: Apologies to all Jews for broaching the Hitler subject, but come on, you gotta give me something I can use here.

I had great hopes for Al Jazeera when it first arrived. I thought, “Yeah, a CNN for the region! Cool!”. Sadly AJ has turned into nothing more than an un-entertaining TMZ without the visual selaciousness. Apparently AJ’s idea of “sexy” is to show long shots of dead corpses. Well produced and slick, no doubt. But how Boring.

Finally in the words that Nima Shirazi so eloquently and idealistically (and ironically) writes under,

“Living is easy with eyes closed / misunderstanding all you see”

“This is no dream. This is really happening!”

OK maybe that last one sucks. Kind of.