Take a good look at these faces……. 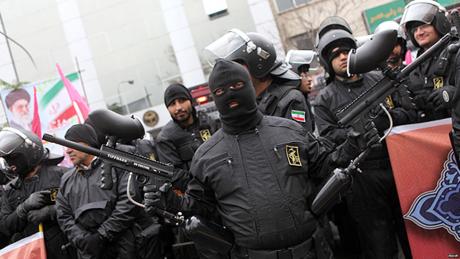 Take a good look at these faces, of pure evil, of our enemy.

These are the faces of the murdering thugs, the islamo Fascist army of occupation of our beloved homeland Iran, who two years ago attacked millions of unarmed, peaceful  demonstrators across Iran , stabbed  & shot to death hundreds of them, raped and tortured tens of thousands more. These are the same murdering thugs who have been killing and torturing the brightest and best of Iran’s youth for the past 32 years.

50,000 of these murderers who answer to and obey only the chief murderer himself, khamenei, were putting on another show of force on streets of tehran, during the aptly named “anti uprising exercise”!!!!,  only last week, with clear objective of telling Iranian people what awaits them if they decide to  go down the path the people of Egypt and Lybia took, and syrians are taking now.

Given the venue and title of this exercise, it is very obvious that these murdering thugs and their bosses very clearly know who their real “enemy” is. Their mortal enemy is not US or israel army. Their enemy is Iranian people….

Make no mistakes. These murdering mercenaries are not reformable. Make no mistakes, so long as these sub human creatures are around and armed, our country will be under the yoke of Islamist fascism, with all the bells and whistles which come with this most evil ideology: poverty, unemployment, prostitution, drug addiction, constant threat of war, gender, ethnic  and religious apartheid…….