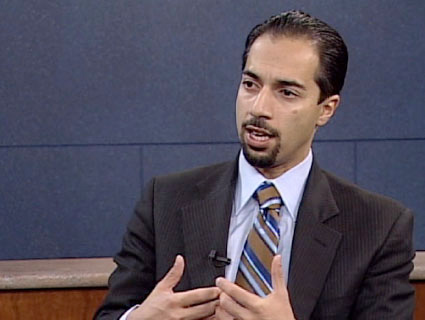 While I have had my disagreement with NIAC’s mission and tactics, I have always liked Trita Parsi personally, and as well intellectually. Honestly, I think it might be the suit. It always seems 2 sizes too big. And maybe the hair. I think outside of 1977 (which in fairness he is too young to relate) a slicked back Tony Manero is completely uncalled for. In case he agrees, and to head that off in advance, so is a Tony Montana.

Personally, I have met Trita many times and found him to be genuine, polite, caring, and just an all around nice guy to talk to. When he does, he has a warm smile.

Intellectually, I think he’s a genius. I think the correct technical term would be “Freaking Genius”. I’ve read all his books and listened to him speak, and there is little doubt in my mind that this is anything other than a great man and mind, trapped in a little body, in a bad suit, with a bad choice of hairstyle.

Case in point, on an extremely well rounded discussion with Neil Conan on NPR’s “Talk of the Nation”, Trita perfectly exemplified everything I just said, sans the negative visual metaphor, given it was a radio program.

The topic? That which is currently on everyone’s minds (save the folks in EVIN), namely “Can Sanctions End Iran’s Nuclear Ambitions?”

I mean this is the perfect question, No? If well analyzed and better answered, this is like the Holy Grail of the greater US-Iran question that, let’s face it, commands the attention of those of us obsessively gnawing at the water drip of sanity this site affords us, like Hamsters hydrating just enough so we can get back on that wheel.

And Trita, the Trita I know personally and intellectually did not disappoint.

Here are just a few quotes that I think best explain why I at once love him, and get so frustrated with the lack of results from NIAC so far.

On what the US and Iran need to do:

“…I think the least bad option is to actually give diplomacy a real chance. The diplomacy that was pursued by the Obama administration in 2009, I think, was genuine, but it was very limited, and Obama administration did not have the patience and stamina to stick with it, partly because there was so much pressure, both from Saudi Arabia, from Israel and from Congress, to abandon diplomacy before it even had had a chance to show any results.

“That’s the least costly option, and that’s also the only option that we have been able to use in other cases successfully, preventing states from pursuing nuclear weapons.”

“… There’s very limited political will, certainly right now in Washington, mindful of the elections that are upcoming. There isn’t any interest in giving diplomacy a chance. Rather, we see the Obama administration almost trying to position itself to the right of the Republicans on this issue.

“In Iran we have a similar issue, not necessarily for the same reasons but because of their very factional politics and infighting that currently takes place in Iran; it’s very difficult to see them in the short run having the political will to sustain diplomacy.

On why sanctions don’t work (my point too)

“… I think it’s very important to note that if there’s anything that has delayed and made sure that the Iranians actually progress with their program, it’s the sanctions policy. We’re talking now again about additional sanctions, and we see that the IAEA report says that the Iranian program actually is continuing.

“After more than 15, 20 years of sanctions, we have absolutely no indications that the sanctions are affecting their nuclear program in such a way that it would change its trajectory or in such a way that the regime would change its calculation. Yet that’s the option that we will be going forward with in the next 12 months or so because not – not because it has any significant chances of a result but because it’s the least costly option from a political standpoint.

On whether Iran should have the right to get a Nuke (Those of you who have suggested “things” take note of this exact quote carefully):

“… I absolutely don’t think that the Iranians should be getting a weapon. The non-proliferation treaty, which they have signed, essentially means that they’re foresworn weapons. The problem is that it’s not necessarily weaponization that we’re focusing on right now.

“For the last decade or so, the United States’ position has been to not permit the Iranians to have enrichment, which is a very preliminary step, but is also a step that is used to produce fuel for peaceful purposes.

“I think that we should proceed and through diplomacy, make sure that we get maximum amount of inspections and verification and insight to the program to make it next to impossible for the Iranians to diverge anything that they’re doing toward a military direction. And by that, also ensure that we limit the amount of enrichment that they’re doing.

“I think that remains a possibility, but if we continue to waste time by just going forward with sanctions, unfortunately, that opportunity may also be lost.”

On who’s fault the current lack of US-Iran diplomacy is:

“… The Iranians have in no way, in my view, been particularly helpful when it comes to diplomacy, for various reasons, and it is not an uncommon thing. In every negotiation at some point, one of the parties, including the United States, will, for tactical reasons, try to waste some time.

“That’s always the case, and we shouldn’t be surprised by that. But the thing is if we want to succeed with this, we have to go in with the level of political will necessary to sustain diplomacy for the amount of time that it usually takes. And in a negotiation like this, it usually takes more than four years to actually get to a final settlement.

“That’s the case when the United States negotiated with Libya, for instance. But if we are in a situation in which we believe that it is actually politically easier, less costly, to send off young American women and men off to war than it is to send our diplomats to go and negotiate, then I think we’re faced with a much, much greater problem than the nuclear issue of Iran, per se.”

On what the real effects of sanctions are and why they aren’t working:

“… the Iranian government is extremely unpopular as it is. I mean, we all saw what happened in 2009, when they stole an election, and there was massive human rights abuses taking places in front – the entire world could see what the regime was up to.

“But the problem with the current sanctions is that they’re putting a lot of pressure on the economy as a whole, and the government itself usually has far better tools to be able to circumvent the sanctions and shift the cost of these sanctions and this pressure onto the population, and that has now taken place extensively, particularly when it comes to these financial sanctions that the Obama administration and the Bush administration also pursued.

“It’s not really differentiating between an activity undertaken by the revolutionary guard or an activity taking place by an ordinary citizen. So everyone is being hit by it. And it’s not led to the type of situation in which people will say oh, we have to rise up against the regime because these sanctions are so difficult. On the contrary, the effect that you’re starting to see is that people are saying you all know, the entire world know that we’re not happy with this government, so why are you putting pressure on the people? You should be putting pressure on the regime. Instead, the people are being punished, and now you’re starting to increasingly see that they’re starting to vent some of their frustrations towards the United States and not just towards the regime.”

Is everyone Sheerfahm on Trita now? Will all the conspiracy theories about him stop? In my opinion no, mostly because of the suit and hairstyle. But quotes are quotes, and facts is facts, and what people say when asked difficult questions in a public, media amplified forum is telling.

Am I satisfied with NIAC’s existing policy, mission, goal, objective, or pattern of ONLY talking to US politicians about effecting change in Iran? Of course not. It still baffles me, and doesn’t make the slightest sense why you would not engage Iran, as directly, and more importantly as politely and within the bounds of shall we call it, “Lobbying”, as you so easily and passionately do with the US.

I do not for the life of me understand why NIAC won’t fax the same letters, email the same petitioned emails, and craft the same form letters for us to sign, and send them to the GODDAMNED GOVERNMENT OF IRAN AT THE SAME TIME!!!

To me there are 2 brats. 2 culprits. Certainly, it can be argued that historically at least, the US is one of them. But to pretend that Iran does not exist in the discussion, and that bi-lateral dialogue by NIAC is not possible is like novocaine. It makes me drool and mumble.

Funny enough though, talking to both sides? It’s the very kind of diplomacy that you advocate in every 3rd sentence of your books, and speeches, and interviews for CHRISSAKES!!!

Again, I call for NIAC to shift gears in to 3rd please. Enough “Neem-Kelatching”. You don’t have to take it to 4th gear, but we’re over the hill, we’ve been around the block, and there isn’t much we can’t handle around the curves. So stop acting like a teenage girl with a learner’s permit, and open her up.

Let’s see what the old girl can do while we’re still breathing.