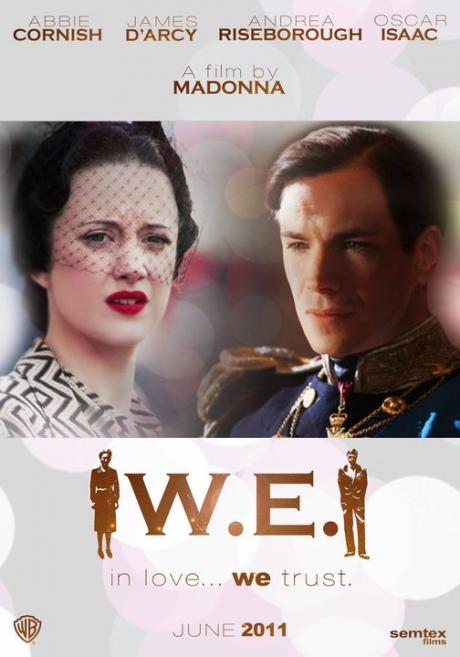 A two-tiered romantic drama focusing on the affair between King Edward VIII and American divorcee Wallis Simpson and a contemporary romance between a married woman and a Russian security guard.

W.E. tells the story of two fragile but determined women – Wally Winthrop and Wallis Simpson – separated by more than six decades.  In 1998, lonely New Yorker Wally Winthrop (Abbie Cornish) is obsessed with what she perceives as the ultimate love story: King Edward’s VIII’s abdication of the British throne for the woman he loved, American divorcee Wallis Simpson.  But Wally’s research, including several visits to the Sotheby’s auction of the Windsor Estate, reveals that the couple’s life together was not as perfect as she thought. Weaving back and forth in time, W.E. intertwines Wally’s journey of discovery in New York with the story of Wallis (Andrea Riseborough) and Edward (James D’Arcy), from the glamorous early days of their romance to the slow unraveling of their lives inthe decades that followed.

Madonna’s film W.E., about US divorcee Wallis Simpson and Edward VIII, has received mixed reviews at the Venice Film Festival.

According to the Daily Telegraph, the royal biopic is “better than expected” and “not without amusing moments”.

But the Guardian dismissed the film as “a primped and simpering folly”.

Variety was also scornful, saying that while it had “lavish production design” it was “burdened with risible dialogue and weak performances”.

Yet Screen Daily was more positive, describing it as “a beautifully staged film punctuated with nuggets of charm and style”.

Speaking to the press in the Italian city, the 53-year-old said she had “identified”with the woman blamed for the 1936 abdication crisis.

“I think it’s very common when people become celebrities or public figures or icons that we are often reduced to a sound bite.

“You’re given a few attributes and then you’re not allowed to have anything more than that,” added the singer and film-maker.

Madonna said her ex-husbands – movie directors Sean Penn and Guy Ritchie -had encouraged her creative ambitions and been “very supportive”.

She added that any initial worries about being pre-empted by The King’s Speech – which also touched upon Edward VIII’s abdication – soon dissipated.

“I thought, ‘oh dear, if someone else is making a movie about the same time-frame, then who would be interested in my movie?'” she told reporters.

“But then Isaw the film and I saw that it was from a completely different point of view.

“I view the success of that film as sort of laying the groundwork for my movie. There is a little bit of history and a little bit of knowledge and we are not starting with a blank slate.”

Writing for the Daily Mail, show business columnist Baz Bamigboye said W.E. was “exquisitely done” but was sure to be divisive because of Madonna’s involvement.

“It also happens to be one of the best-dressed movies of the year,” he adds.”The costumes, as you would expect from the original material girl, are eye-popping.”

Britain’s Andrea Riseborough portrays Simpson in Madonna’s second outing behind the camera,which had its official Venice premiere on Thursday evening.

Roman Polanski’s new film Carnage has also had its premiere on the Lido, Venice’s sea-facing island and base for the annual 10-day festival.

The director did not travel to Venice to attend the event, though the film’s stars – Kate Winslet, John C Reilly and Christoph Waltz – did walk the traditional red carpet.

“If Roman Polanski invites you to join in any project, you really don’t say no,”Winslet told reporters on Thursday.

Based on the Yasmina Reza play God of Carnage, the film tells of two NewYork couples brought together after their children are involved in a playground brawl.