A dawn to Iran’s era of Barbarism! 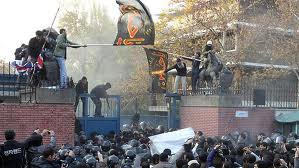 In the aftermath of the recent thuggish attacks on the British Embassy compounds in Tehran, some reactions arose among many people saying that the Brits have paid for their leniency towards this regime. Notably allowing them to buy properties in Britain with the money they have looted from Iran and roam freely there, and in most cases settling and acquiring a second nationalit for theri good for nothing children. Afterall, the story of the guy who had a hypopotamus as a pet comes into mind. Knowing the violent nature of the beast, the man kept petting and feeding it. One day the animal attacked and killed him. He refused to see that coming.

I don’t agree with that reasoning and these are my reasons. First of all, unlike the Iranians, the Brits look after their own national interests. As long as the money is coming, they don’t care where it is coming from. They built an empire on that principle. It has to come from somewhere and with the leafy streets of west London being virtually one of the few and far between assets that they remain to have, if the money is has the blood stains of the Iranian people on it, they don’t care and why should they? That is our propblem.

Iranians have habit of blaming everything but themselves for their misfortune. Among many other disasterus consequences, this habit of self denial makes you forget about the reality on th ground; Forgetting the reality of how serious your problems are and erasing the question without bothering to find an answer. This highlights another troubling Iranian national character trait, Irresponsibility! Towards our destiny and towards our society. You can see this in out streets, the way we drive, they way we go to picnics, even in our proverbs; “digi ke baraye man najoosheh, mikham sareh sag toosh bejoosheh.”.

These are Iranian charactersitics that have made Iran the kind of a lawless, chaotic, materialistic society it is nowadays where individuality is the first word on everyone’s mind.

No one put it better than William Hague, the type of actions that happenned in Tehran puts any nation to shame! It sure does. As a nation we have bow our heads in shame for leading our country to a point that we can’t even behave like human beings.

I think what happenned in Tehran a few days ago is the starting point of increasing violence and lawlessness that will grip Iran in months and years to come. Time to wake up and do something fundemental about our country and if we care take our destiny in our own hands! Old 1953 Mossadegh stories won’t do shit and frankly, who cares?!

One last thing! Why this regime is so anti life? Shame on those bastards who destroyed the beautiful and historic paintings in the British Embassy.