Pissing Off the U.S. 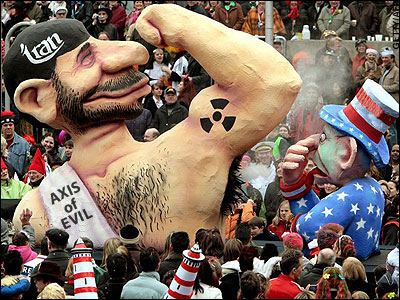 Some of us seek to argue for a soft landing for US-Iran relations through things like serious mutually beneficial and peaceful dialog, and discussion, and well, for lack of the these days rarely used term, diplomacy.

Having seen how entrenched Iran is after 32 years. If there was a chance to overthrow the current system and move it back on track to democracy, I think a pragmatic, less idealistic person would say, that time has passed. Unfortunate and dream-crushing as that may sound to those who still cling to the notions of a restored new-age reformed lite-Monarchy, or those who can only envision the sweet taste of revenge by putting up mullahs against the same Evin wall.

But we pragmatists try and take our lessons from facts and the historical record, and more importantly, those facts, and that history in which similar situations have been turned into successes, by methods and practices that have actually been tried and shown to work elsewhere.

Specifically the best example of this is the complete turn that South Africa took after Mandela was freed and a tyrannical, oppressive brutal government, handed over power in several small steps, at a surprisingly fast pace.

OK, so Iran is not South Africa, and certainly this tyranny has done it’s damned best to snuff out anything close to our Mandela. But some of the lessons and many from other similar examples can certainly be applied.

But the most important thing is that we don’t actually have to come to blows to settle this.

Unfortunately it seems like both sides are bent on it though, with each ratcheting up the rhetoric to higher and higher temperatures. The West with added sanctions that will only a) raise the price of oil in Iran’s and Chevron’s favor (Oh wait! Is that why?…), b) entrench Iran’s leadership and those on the list to a heightened awareness of their self-importance, and c) give the government of Iran yet more reasons to tighten down “security” for (on) the people of Iran.

People under attack, usually respond negatively to the attackers even if it is the fault of their government, regardless of why. When the bombs start falling, the people will blame the bombardiers, not Khamenei.

Looking at this escalation though, with the attacks on the British embassy in Tehran, and the mysterious coincidental explosions at Iran’s missile bases and nuclear facilities, I have to regroup and reconsider any kind of Iranian position against the obvious might and more importantly of the generally more extreme war culture of the US.

It is therefore extremely important for this Iran to understand exactly where Iran sits right now in the world, and not be so arrogant and stupid, and have any false illusions of Iran’s capabilities, capacity to sustain pain, and more importantly the willingness and dedication of it’s people to “the cause”. The likely outcome is well, becoming more and more likely the more that Iran pokes the US in the eye. And thus it is better that Iran NOT provoke the far angrier and far fiercer enemy it has provoked at every step since 1979.

As unfair as it seems, as bitter a pill as it is for Iran and some Iranians who feel the same to swallow. Simply, the US is not a country that you ever think of crossing. Not because the US is always right. Just that they are not built for it. Many accuse the US of being uncultured, but in fact the one cultural trait that has been continually reinforced in the US, is that the US cannot EVER allow ANYONE to step on it. The US has been willing to go to the very brink of totally mutually globally assured destruction, toe to toe, eyeball to eyeball, nose to flaring nostril, with the Soviets for 50 years, rather than blink.

Iran is not the USSR. Iran does not even have the fighting commitment of the Boy Scouts in comparison to the sheer industrial killing capacity of the US.

To go up against the US now, or ever, is the height of dangerous, irresponsible, and delusionally self destructive, suicidal arrogance. So retarded is this move by Iran now, that were God forbid, a war to break out and dead Iranians started showing up and as they were told to do by Khamenei to stand in line at the Shaheed gates into heaven, God would tell them “You guys are in the wrong line, Heaven is for Smart Shaheeds, you Stupid Shaheeds need to go to Hell.”

Assuming that Iranians accept that Sun Tzu is worth quoting, Sun Tzu in the “Art of War” said, “If you know neither yourself nor your enemy, you will always endanger yourself.”

Given that this government certainly does not know who Iranians are, and with the amount of in-fighting going on amongst themselves now, it is therefore highly evident that Iran knows neither itself, nor the US. Which means that in a fight with the US, Iran is certain to get hurt. Which now that I look at it, is fucking obvious. Maybe Sun Tzu was not the genius they say he was, and was merely observant.

To give you a precise look into the motivational role that war plays in US culture, the war machine it has massed, and the culture of war that it has infused every single red-blooded cell and fiber in every single bloody-steak and pork devouring American, since inception:

“…this stuff that some sources sling around about America… not wanting to fight, is a crock of bullshit. Americans love to fight, traditionally. All real Americans love the sting and clash of battle. You are here today for three reasons. First, because you are here to defend your homes and your loved ones. Second, you are here for your own self-respect, because you would not want to be anywhere else. Third, you are here because you are real men and all real men like to fight. When you, here, every one of you, were kids, you all admired the champion marble player, the fastest runner, the toughest boxer, the big league ball players, and the All-American football players.

Americans love a winner. Americans will not tolerate a loser. Americans despise cowards. Americans play to win all of the time. I wouldn’t give a hoot in hell for a man who lost and laughed. That’s why Americans have never lost nor will ever lose a war; for the very idea of losing is hateful to an American.

You are not all going to die. Death must not be feared. Death, in time, comes to all men. But a real man will never let his fear of death overpower his honor, his sense of duty to his country, and his innate manhood.

Battle is the most magnificent competition in which a human being can indulge. It brings out all that is best and it removes all that is base.

Americans pride themselves on being “He Men” and they ARE “He Men.” Remember that the enemy is just as frightened as you are, and probably more so. Because they are not supermen!…