Young Constitutionalist Explains why he Favors Monarchies over Republics 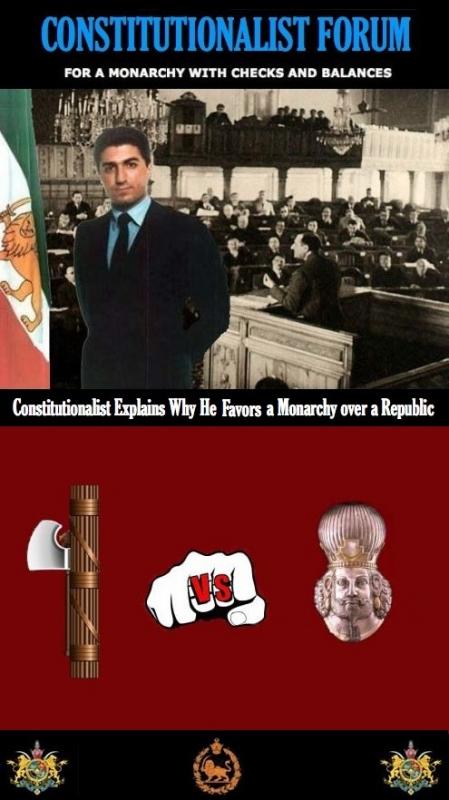 Khosro Faravahar an Iranian Constitutionalist in Austria explains why he favors Monarchies over Republics and offers a distinction between “Parliamentary Monarchies”, “Republics” and “Absolutism” (which as much as democracy can exist equally in both Republican and Royal Systems of government).

Khosro Faravahar Explains why he Favors Monarchies over Republics:

AN AVENUE FOR AN OPEN MINDED DEBATE

Interesting CGI debate explaining the concept of the Constitutional Monarchy to a Staunch Portuguese Republican who refuses to see it restored. The arguments are interesting on both sides of the political spectrum and can be applied to the dilemmas faced by countries where Revolutions have failed to establish a democratic system of government or where the Republic’s in question have failed to live up to their promises.

Yet Iranians particularly in the United States seem to favor Republics as a future form of government in a Post IRI Iran.

Is this due to ignorance, lack of curiosity, or intellectual laziness? …

Bebin TV Survey On Iranian American’s on their Culture, History and Flag:

During the Spring of 2008, Raha and Tiam conducted their own little historical experiment.

Asking about the Iranian flag as well as some of the most well known Iranians, who they are, what they do etc.

If they know their celebrities like Ali Daei (Soccer Champ) Parviz Sayyad (Samad Agha) or Public Figures in Politics ranging from Khamenei to Mossadeq (Mossadegh) Shah (Mohammad Reza Pahlavi) and if they can distinguish their flag amongst those of Hungary, Italy or Mexico

Related Blogs On the Monarchy:

GALLOWAY’s REPUBLIC: George Galloway on the Decline of the British Monarchy

Cyrus Amir-Mokri on Pros and Cons of 1906 Constitution

THE PAST IS A FOREIGN COUNTRY: How Would You Evaluate Iran’s Democracy Index in1953 ?