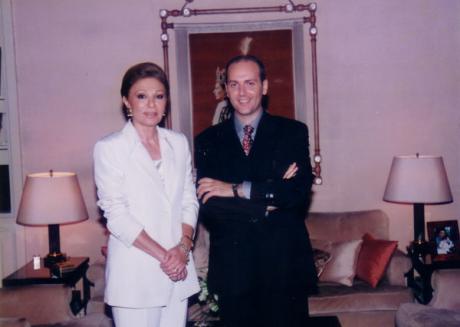 Shahbanou Farah in an exclusive interview in French with Lebanese talk show host Ricardo Karam is asked about how Iranians view the Royal family despite the fall of the monarchy. Interview conducted on the 20th anniversary of the Revolution which brought down her husband’s dynasty.

Shahbanou Farah Pahlavi Former Queen of Iran and the first Empress to be crowned in modern times, Diba was a major player in world events at the time. After the Iranian revolution of 1979, she escorted her heart broken husband into exile. As Empress, Pahlavi had traveled all over Iran promoting human services, advancing the arts, preserving the culture and enhancing the position of women of which she still speaks out. Living in America she continues her fight against what she sees as a morally bankrupt and unpopular political system in Iran. The interview with Ricardo Karam took place in Paris, France.