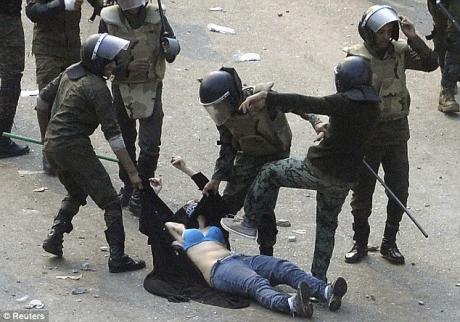 Here I am, off and on, for many years, having tried to understand what Shakespeare tries to say in his poems, and many times failing.  And so, I was looking at a photo of an unarmed Egyptian female protester being beaten, kicked, and dragged by riot police, her clothes torn, her midriff exposed.

And then I read a comment today, saying in the next demonstration she better shave her armpits!  Well, from the photo it is apparent that the protester’s armpit is not shaven.  I have nothing against what the comment said, as a matter of fact I take side with those who wish to believe that in life one never knows what might happen next, so it’s better to be prepared for the worst.  However, upon reading those words in the comment, I uttered to myself, quietly, Eureka!  I have a different understanding of Hamlet now!  I mean, in Act 3, Scene 1, where Hamlet says, “To be or not to be, that is the question.”  And, the question is about suicide and death; and my moment of eureka was for a different take on the famous soliloquy [a theatrical device often used in drama whereby a character relates his or her thoughts and feelings to him/herself without looking at the audience and to the audience without addressing any of the other characters, Wikipedia].

Watch this, then read the poem:

Here is the poem, with some minor changes (my words are in bold), some changes to punctuations, to the spelling of some words, and some added explanations in brackets.

Act 3, Scene 1, the woman is in her living quarters, putting her clothes
on, and getting ready to leave her house to join the protest at the
Tahrir Square.

To shave, or not to shave; that is the question
wondering,
which one is worse,
in the minds of the riot police

The sticks and batons, the outrageous fortunes,
or to take arms against a sea of troubles. [She is wondering about armed revolution while getting dressed]

And by opposing, end them? To die, to sleep,
no more, and by a sleep to say we end. [Oppose tyranny to the end, and die we will, if we have to, while doing it]

The heartache and the thousand natural shocks,
that flesh is heir to, this is the consummation. [Life is pain, then you die, so who cares!]

Devoutly to be wished. To die, to sleep;
To sleep: perchance to dream: yes, there is the rub; [Yes, perhaps dying is fine, but there is a catch, the catch is that she might get killed]

Must give us pause: there is the respect
that makes calamity of so long life; [The question of death makes us pause and respect the calamity of life]

With a bare gun?  Who would fardels [کوله بار] bear,
to grunt and sweat under a weary life, [Get a gun and start a revolution]

But that the dread of something after death,
the undiscovered country from whose bourn [boundaries]
no traveler returns, puzzles the will
and makes us rather bear those ills we have [No one has returned from being
dead, so it makes one contemplate it a bit, is anything worth dying for?]
than fly to others that we know not of? [و بریم جایی که ازش خبر نداریم]
Thus conscience does make cowards of us all; [now I must think twice before I give up my life]

And thus the native hue of resolution
is sicklied over with the pale cast of thought, [so now the fiery color of courage is replaced by the pale color of someone thinking]

And enterprises of great pith and moment
with this regard their currents turn awry, [The tide changes thinking about death while flying high and momentously]
and lose the name of action.  Soft you now!  [و اکشن بی‌‌ اکشن, enough or now]

May God be in your prayers!

Be all my sins remembered.