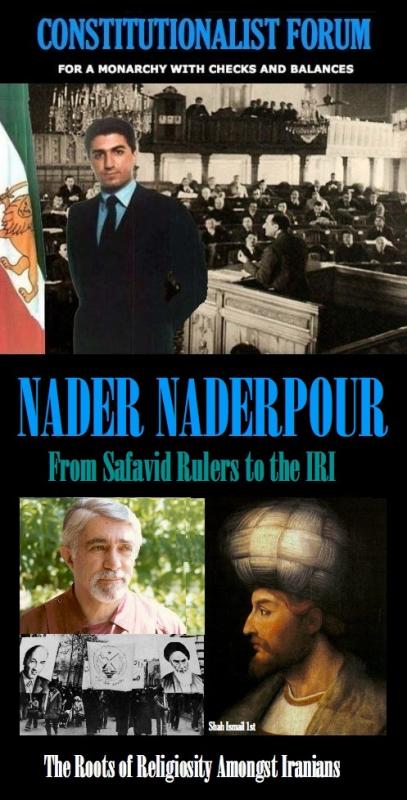 Nader Naderpour explains to Ali Limonadi why he thinks the roots of religiosity in Iranian Society to this day is a heritage of Safavid rule.

Mohammed Khatami on the Impossibility to Separate Religion From Politics

“Stop praying all day and roll up

Shah Admonishes The Working Class: “Stop Praying All Day and Roll Up Your Sleeves”:

Eventhough Safavids were not the first Shia rulers in Iran, they played a crucialrole in making Shia Islam the official religion in the whole of Iran. There were large Shia communities in some cities like Qom and Sabzevar as early as the 8th century. In the 10th and 11th centuries the Buwayhids, who were of the Zaidiyyah branch of Shia,ruled in Fars, Isfahan and Baghdad. As a result of the Mongol conquest and the relative religious tolerance of the Ilkhanids, Shia dynasties were re-established in Iran, Sarbedaran in Khorasan being the most important. The Ilkhanid ruler Öljaitü converted to Twelver Shiism in the 13th century.

Following his conquest of Iran, Ismail I made conversion mandatory for the largely Sunnipopulation. The Sunni Ulema or clergy were either killed or exiled. Ismail I, despite his heterodox Alevi Shia beliefs (Momen,1985), brought in mainstream Ithnā‘ashariyyah Shi’a religious leaders and granted them land and money in return for loyalty.Later, during the Safavid and especially Qajar period, the ShiaUlema’s power increased and they were able to exercise a role, independent ofor compatible with the government. Despite the Safavid’s Sufi origins, most Sufi groups were prohibited, except the Nimatullahi order.

Iran became a feudal theocracy: the Shah was held to be the divinelyordained head of state and religion.

In the following centuries, this religious stance cemented both Iran’s internalcohesion and national feelings and provoked attacks by its Sunni neighbors. (More Here)

SOURCES OF FURY:Nader Naderpour on origins of IRI’s “Death Slogans” towards US and Israel

How YOUR “Green” Color Was Chosen & By WHOME !

Banisadr On Risks and Conditions Of Seeing Reza Pahlavi Restored

Cyrus Amir-Mokri on Pros and Cons of 1906 Constitution

Young Constitutionalist Explains why he Favors Monarchies over Republics