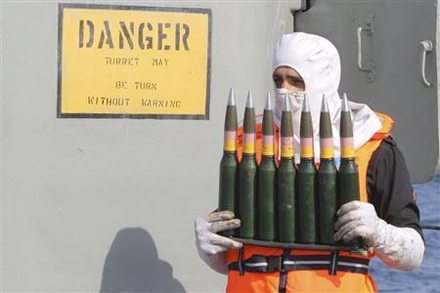 “The greatest threat that Israel faces, and frankly the greatest threat the world faces, is a nuclear Iran.” The author of this inanity is none other than Mitt Romney, the man the Republicans are likely to choose to challenge Barack Obama in this year’s presidential elections.

Can Romney really believe what he says? Is he reckless enough to push the United States into war with Iran? Or is he merely vying for Jewish votes — and Jewish campaign funds — by parroting the over-heated arguments of Israel’s lobbyists at AIPAC and the Washington Institute, and in much of the rightwing U.S. media?

What is Iran’s crime in the eyes of these hard-liners? It is that it has refused to submit to American military hegemony in the Gulf and, together with its allies — Syria, H|izballah and Hamas — has made a small dent in Israel’s military supremacy in the eastern Mediterranean. Does this make it a world-wide menace?

Are the United States and Israel really prepared to go to war over these issues? It does not appear so. All the indications are that war is not being seriously contemplated by the United States or by Israel — or for that matter by Iran either. In all three countries, the warmongers may already have lost the argument.

Washington sources report that Obama has long since ruled out a resort to force against Iran, which he considers far too risky. Having brought America’s calamitous war in Iraq to a close, he is now hoping to wind up the Afghan conflict by means of a negotiated settlement. The opening of a Taliban office in Qatar — as is now being proposed — would facilitate such contacts. It is self-evident that Obama will spare no effort to save the United States from being drawn into yet another costly, open-ended military adventure in the greater Middle East.

Instead, he appears to have quietly chosen to opt for a policy of containment and deterrence. But, since he has no wish to be accused of being weak on Israel, this sensible policy has not been made public. The official U.S. line is that “all options are on the table,” but, for all practical purposes, the military option has been firmly dropped.

A hint that the hawks in the administration have been defeated may be seen in the recent resignation of Dennis Ross from his job at the National Security Council as Special Assistant to the President for the greater Middle East and South Asia. Ross has now returned to his old home at the Washington Institute — AIPAC’s sister organisation — which he founded with Martin Indyk in 1980, with the task of shaping America’s Middle East policy in a pro-Israeli direction, as well as placing its men in key government jobs — both of which it has done with great success. Back at the Institute, he is continuing to push his hard-line views, declaring in a recent speech that the aim of US policy should not be containment but prevention of Iran’s nuclear programme — if necessary by force.

Israel is not contemplating war against Iran, any more than the United States. Its noisy threats are, paradoxically, a signal that it is not planning to attack. When it bombed Iraq’s Osirak reactor in 1981, and Syria’s alleged nuclear facility in 2007, it did so in total secrecy and with no advance warning. Prime Minister Netanyahu’s fevered references to the ‘existential’ menace of an Iranian bomb should, I believe, be read, not as a prelude to war, but as an alternative to war. His intention is to frighten Iran and pressure the Western powers into imposing ever-tougher sanctions on it. The blackmail is working. This week Obama passed into law new unilateral sanctions against Iran’s Central Bank, the financial pivot of its oil transactions.

A lively debate has been taking place in Israel between generals and politicians. Warning of a new Holocaust, Netanyahu has likened Iran’s President Ahmadinejad to Hitler. His generals do not agree. An attack, they say, would at best set back the Iranian programme by a year or two, and might well, in fact, drive Iran to go all out for nuclear weapons. The generals understand that it would be the height of folly for Israel to make an ‘eternal’ enemy of a country vastly bigger and richer than itself, with ten times its population.

Meir Dagan, Mossad’s former chief, has said that war with Iran would be a catastrophe. His alternative way of dealing with the problem has been to assassinate Iranian scientists, infect Iran’s computers with Stuxnet and other worms, sabotage its installations, and destabilise it in every way possible. He recommends a “stealth war,” not a shooting war.

Even if none of the parties — Israel, the United States and Iran — actually want war or seriously anticipate it, there is always the possibility that war might break out by accident. Targeting Iran’s Central Bank and threatening to boycott its oil exports, as some Western nations are proposing to do, create a climate of hysterical nationalism that could trigger a clash. Iran has tried to call the West’s bluff by threatening to close the Straits of Hormuz, but a serious attempt to do so could set the whole region on fire — which is almost certainly the last thing Iran or the United States would want. In my view, not too much should be read into Iran’s recent naval manoeuvres in the Gulf, or its testing of new missiles. It has carried out such exercises in the past.

Containment and deterrence are clearly better policies than war-mongering. But they are not without difficulty. Establishing the rules of a system of mutual deterrence can be tricky. The first months, or even years, can prove dangerous until the system is perfected and the rules fully understood by both sides. For the scheme to be safe, a “hot line” between the parties would need urgently to be established.

If Obama could summon up the political courage for a long-overdue dialogue with Iran — interrupted 32 years ago — the danger of war would be dispelled, to everyone’s relief.

First published by Al-Hayat (London and Beirut), in English by Gulf News (Dubai) and The Diplomat (Tokyo).

AUTHOR
Patrick Seale is a leading British writer on the Middle East. His latest book is The Struggle for Arab Independence: Riad el-Solh and the Makers of the Modern Middle East (Cambridge University Press).