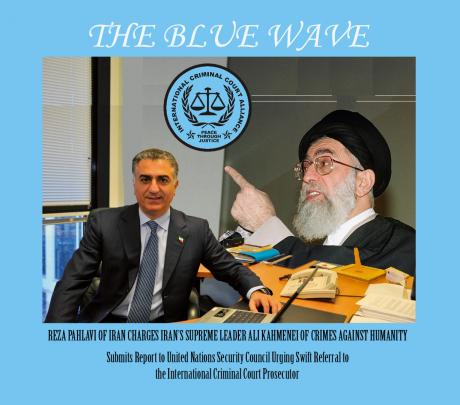 The filing, “Report on Crimes Against Humanity Committed in Iran on the Orders of Mr. Ali Khamenei – Supreme Leader of the Islamic Republic of Iran”, focuses on the crimes against humanity committed to suppress popular dissent after President Mahmoud Ahmadi Nejad’s fraudulent re-election in June 2009.

The report contains sufficient evidence for the United Nations Security Council to take up this matter immediately and promptly refer it to the Chief Prosecutor of the International Criminal Court in The Hague.  Reza Pahlavi commented: “For the past thirty-three years, the so–called Supreme Leaders of the Islamic Republic implemented a policy of oppression against ethnic communities and religious minorities.

And the historical record testifies to these facts. Today, I call on the Heads of State and Governments of member countries of the Security Council to refer these crimes to the Prosecutor of the International Criminal Court, in accordance with Article 13 (b) of the Rome Statute, for a full investigation of the crimes committed by leaders of the Islamic Republic against Iranian civilians.”

“The people of Iran have suffered far too long. Today they need help and support from the international community,” Reza Pahlavi continued.

“I, therefore, urge all who cherish justice around the world to take action now and demand their respective governments – particularly those members of the United Nations Security Council – to take affirmative and immediate action on this complaint.”

Reza Pahlavi intends to file further supporting documentation regarding the abuses of Iranian citizens and will summarize these crimes in future reports.

Download a copy of the full report submitted to the United Nations: Here